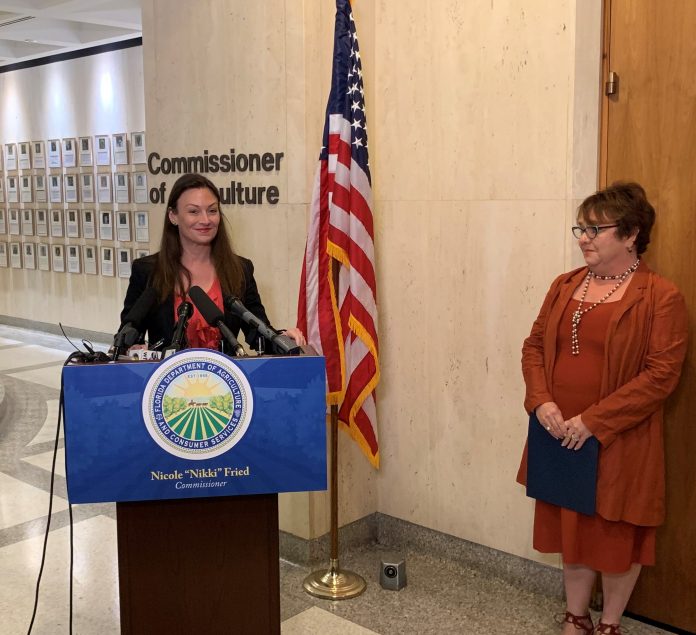 Florida has its first cannabis director. And her marching orders are to give more patients access to legal marijuana.

State Agriculture Commissioner Nikki Fried on Wednesday named Holly Bell as the cannabis director in the Florida Department of Agriculture and Consumer Services. Fried has directed Bell, a Nashville consultant with extensive experience in finance and cannabis businesses, to amp up the state’s burgeoning medical marijuana and hemp industries.

The only Democrat elected to statewide office last November, Fried says her agency’s top priority  will be to develop  cannabis programs, including carrying out the 2016 medical-marijuana state Constitutional Amendment.

“The previous administration has obstructed the access and denied the will of the people,” Fried said. “But a brand new day is here in the state of Florida. Cannabis is an incredible opportunity for our state, a life-changing treatment, a major economic driver, a chance to revolutionize agriculture in the state.”

Bell has a bachelor’s degree in agriculture economics from Purdue University. She helped develop  Tennessee’s industrial hemp industry. Hemp is related to marijuana but has no psychoactive effects – but cannabidiol oil (CBD) is a hemp extract, and advocates tout its medical benefits.

Bell said hemp presents a “multi-billion-dollar opportunity” for Florida and could replace crops that have become less financially viable.

In Tennessee, Bell said she was part of an effort to bring farmers, investors and government officials together “to help build an infrastructure to prepare for that state’s hemp bill and cannabis industry and drive their economy.”

“We wanted the hemp to be cloned, grown, processed, manufactured and sold in Tennessee,” Bell said. “We can do the same thing here in Florida with the ‘Fresh from Florida’ cannabis products. It will be successful.”

Bell, who will be paid $110,000 a year, will also be involved in a host of other efforts to expand not only the hemp industry but to provide better access to medical marijuana, Fried said.

For instance, Fried said CBD products are being widely sold in Florida but are unauthorized and unregulated. She said she wants to create a program to regulate the products, making sure labeling is accurate and the ingredients are safe.

“We see this as a consumer issue,” Fried said. “It is our job to make sure that citizens of the state who are buying CBD know exactly what’s in it. And you don’t have that right now.”

On other medical-marijuana issues, Fried said she wants to see the state issue more licenses to growers and create more medical marijuana dispensaries.

Fried said she will also advocate for health-insurance companies to provide coverage for medical marijuana.

As for pending legislation in the Senate and House that would allow sick people to smoke marijuana, instead of taking it in tinctures, oils and other forms,  Fried said she is disappointed that the current versions of the bills are adding more restrictions rather than allowing broad access.

Lawmakers send a bill to governor making it harder for citizen...