Home Joe Biden took swipes at the president at an evening rally in...

Former vice president Joe Biden took swipes at President Donald Trump at an evening campaign rally in Tampa on Thursday, saying Trump has “surrendered” to COVID-19; refused to believe in systemic racism and has spread division and discord throughout the country.

Earlier in the afternoon, Trump’s rally, also in Tampa, included numerous potshots at Biden. But it was Biden’s turn later in the evening.

The two ended up in Tampa, less than a week before Election Day, with a very close race in the influential swing state of Florida.

The outside event for Biden Thursday evening included beeping cars and signs, and the start of rain.

As to the COVID-19 pandemic, Biden said, “I know it’s hard. Over these past months, there’s been so much pain, so much suffering, so much loss in America.” And more than 225,000 people have died from the disease.

Biden said Trump “refuses to listen to science” and appears to have given up control over the virus, essentially allowing people to die.

“But the American people never give, up, we never give in,” Biden told the crowd. 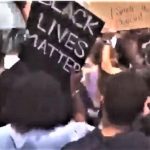 Biden criticized Trump’s behavior in calling those in uniform losers and suckers. As to racial strife and protests this year, Biden said, “Donald Trump doesn’t believe that systemic racism is the problem. He won’t say ‘Black Lives Matter.’ We know they matter.”

Biden also discussed climate change — he said Floridians know it is a crisis —  and federal taxes –“Why should you pay more taxes than Donald Trump pays?”

Americans should be able to have the most necessary and basic things, according to Biden. That means economic justice, good schools, access to capital, a minimum wage of $15 an hour, financial stability and the ability to buy a home, start a business and send a child to college.

Overall, Biden has said he wants to restore the soul of the country and unite all Americans.

In-person voting on primary day: ‘People are in fear that something...