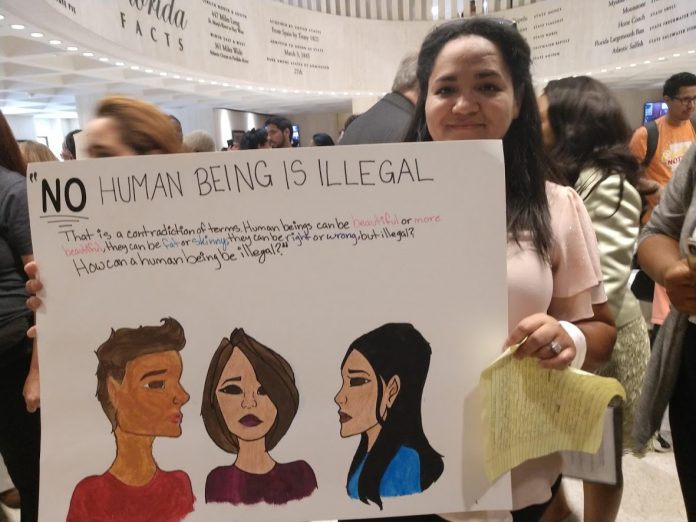 What does that mean? If you’re an undocumented immigrant, you could get deported if you come into contact with the criminal justice system.

The bill also would give the governor the power to remove public officials who refuse to cooperate with federal authorities in dealing with undocumented people.

The bill passed along party lines in the GOP-controlled Senate on Friday, 22-18, with the exception of Senator Anitere Flores, a Republican from Miami, who opposed the measure. It now goes back to the House for a final vote next week.

The measure is sponsored by Sarasota-based state Senator Joe Gruters, who also serves as the chairman of the Republican Party of  Florida. It’s strongly supported by Gov. Ron DeSantis, who campaigned against so-called “sanctuary cities” in his campaign last year.

The bill sponsors acknowledge that there are no sanctuary cities in Florida — meaning safe havens for the undocumented. But they insist that there are local governments that include sanctuary policies. The measure would also require local authorities to honor detainer requests from U.S. Immigration and Customs Enforcement (ICE) that can lead to a person’s deportation.

Democrats blasted the proposal as mean-spirited.

“What are we mad at?” asked Sen. Perry Thurston from Broward County. “We don’t have to do this. Do we feel like somebody’s taking something from us?”

Sen. Jose Javier Rodriguez, a Democrat from Miami-Dade County, filed 42 amendments to try to alter the bill. One of them passed – a proposal that would exclude the Florida Department of Children and Families from the list of government agencies who would be sanctioned if they didn’t cooperate with Immigration and Customs Enforcement (ICE).

This is not the first time the bill has been introduced in the Legislature. But there were enough Republicans in the Senate to join with Democrats to block it from passing in previous years.

Senator Rodriguez said the fact that the bill is likely to pass this year shows that the Republican Party now is shifting from a party of conservatism to nationalism, “along the lines of the far right in Europe.”

Gruters originally said that the bill would only target those who have committed criminal activities, but later admitted that local law enforcement could arrest an undocumented immigrant for not having a driver’s license, and at one point suggested that the undocumented should use public transit instead. During Friday’s debate he returned to the idea that the aim of the legislation would only go after “the worst of the worst.”

The bill does not include what type of economic impact it could have on the state, but one national pro-immigration group says it could cost the state “billions.”

According to a report from the New American Economy Research Fund, which has analyzed the impact of similar “sanctuary city” bills in other states, the state will suffer significant economic losses and threaten key parts of the state’s workforce in industries like agriculture and construction.

A group of immigration activists who were sitting the gallery emerged afterwards visibly upset, with some crying.

“It’s very concerning. We don’t feel that the will of all residents of Florida have been heard,” said Pamela Gomez with the Florida Immigrant Coalition. “We feel very disenfranchised at this moment, because we were expecting more from our leadership.”

State Sen. Tom Lee from eastern Hillsborough County was the only Republican who voiced concerns about the implications of the bill during the debate, saying all parties deserved blame for the immigration situation in America.

He criticized Republicans for “selective indignation,” saying that they failed to support E-Verify, a web-based system that allows enrolled employers to confirm the eligibility of their employees to work in the U.S.

“Rather than cut off the draw to America which is the job, we let that draw continue, and so they too have responsibility for where we sit today, because they won’t take responsibility for passing public policy that will make it harder for people to get a job in this country when they come here,” he said, before ultimately siding with his fellow Republicans in supporting the bill.

Is Florida GOP’s tough talk on immigration a winning ticket in...