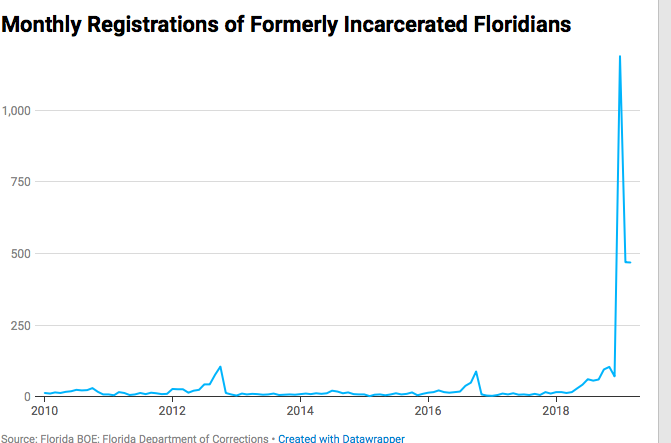 A measure the Florida Legislature passed to limit the number of felons who can get their voting rights restored will disproportionately affect African-Americans, a new research report says.

An analysis from the Brennan Center for Justice published last week says that there has been a dramatic increase in felons registering to vote since Amendment 4 went into effect Jan. 8.

Using data from the Florida Department of Corrections and the Board of Elections, the report says nearly 100 times more felons registered to vote from January to March this year than in previous odd-numbered (off-year election) years such as 2017 or 2015. More than 44 percent of the felons identified themselves on their voter registration forms as black. That’s more than three times the state’s overall average of black voters.

“There can be no mistaking the racial and class implications of this regressive new legislation,” the report says.

More than 64 percent of Floridians approved Constitutional Amendment 4, which called for restoring the voting rights to all felons (except murderers or sex offenders) when they completed their sentences. But the Legislature’s bill – which Gov. Ron DeSantis has yet to sign but indicates that he will – adds a new hurdle, saying felons can only register to vote once they pay all fines, fees and restitution or get a special waiver. It’s expected to limit the number of felons who will be able to vote, and critics call it a “poll tax,” referring to voting fees imposed during the segregationist Jim Crow era.

The Brennan Center report also says that by using U.S. Census data, researchers were able to estimate the socioeconomic characteristics of the electorate, and the average income of felons who registered to vote between January and March is nearly $15,000 below the average Florida voter’s income ($45,000 vs. $60,000).

In a statement to supporters last week, Desmond Meade, executive director of the Florida Rights Restoration Coalition (which led the campaign to pass Amendment 4), said while his organization still believes no legislation was needed to implement Amendment 4, “the reality is that it’s here.”

“In spite of our belief that this legislation is not ideal, we are committed to operating under the law to register every one of the estimated 840,000 qualified returning citizens in Florida and will utilize the provisions of the legislation to provide relief for the remaining returning citizens that face financial barriers to registering to vote,” Meade said. “We’re going to make voting exciting again by doing our part to make a more robust and inclusive democracy.”

It’s not just Florida – politicians are trying to restrict citizen...

Students from across Florida skip school to participate in global youth...