Home Ex-offenders will get help registering to vote

Saying that he wants to ensure that the maximum number of felons get to exercise their newly earned right to vote in Florida, a former Democratic state legislator has created a program to ease their voter registration process. 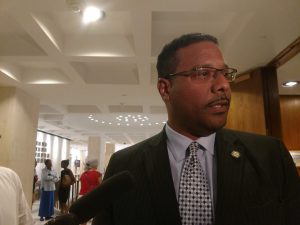 Sean Shaw, who served in the Florida House between 2016-2018 and was the Democratic nominee for attorney general last year, said Wednesday that his recently formed progressive non-profit advocacy organization, People Over Profits, has put together a legal aid network of volunteer attorneys in some of the state’s biggest regions to help felons navigate the registration process.

Floridians overwhelmingly passed Amendment 4 last fall at the ballot box. The constitutional amendment automatically restored voting rights to an estimated 1.4 million people with a past felony conviction. But the bill signed June 28, by Gov. Ron DeSantis implementing the law has been met with a flurry of lawsuits, because it restricts those eligible to vote to felons who no longer owe any fines, fees or restitution to victims.

The ballot language itself only said that all felons — with the exception of those who committed murder or sexual felony — could be eligible to vote. But supporters of the measure said during the campaign for Amendment 4 last year that completion of a criminal sentence did include paying off fines, fees and restitution. They balked, however, when members of the Republican-led Legislature insisted on including those caveats in the bill implementing the law. That’s led to four different lawsuits questioning the law’s constitutionality since DeSantis signed the bill.

In addition to providing legal aid, Shaw said on a conference call that People Over Profits will also be publishing a voter registration guide to answer the most common questions on how to register to vote, as well as a shareable infographic that details the process.

“We’re making a long-term commitment to supporting returning citizens,” Shaw told reporters. “The process to register to vote for thousands of ex-offenders can actually be pretty seamless, and we want to make sure that the process isn’t a barrier for a single person.”

It is not known how many people owe fines, fees or restitution. Members of the Florida Rights Restoration Coalition, the lead organization that advocated for Amendment 4 last year, announced this week that they have created a new website where citizens can contribute to a fund to help pay those fines and fees.

Because the new law requires former offenders to have to pay before they can get their right to vote restored, critics have labeled the law a “poll tax.”

Shaw, the son of the late Leander Shaw, the first African-American to be named as chief justice on the Florida Supreme Court, said that was a “strong term” that he didn’t feel comfortable using.

“I don’t believe the law follows the spirit of what we as citizens were voting for when we passed Amendment 4,” he said, noting that he was “well aware” of the arguments made by attorney Jon Mills before the Florida Supreme Court that the completion of a criminal sentence did in fact include paying off fines, fees and restitution.

And Shaw bristled when asked if his effort was independent of the Florida Democratic Party. “This isn’t political. This is us trying to help people navigate the current system.”

For more information, go to PeopleOverProfits.org.

The battles over abortion haven’t abated in Florida