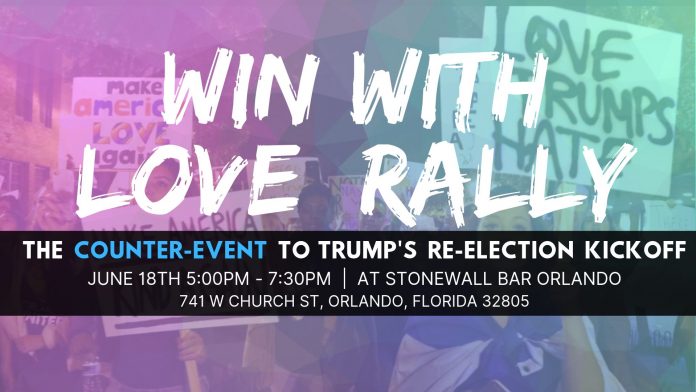 Donald Trump officially kicks off his reelection campaign next Tuesday night at the Amway Center in Orlando, and some of his political opponents say they’ll be ready to greet him.

Activists are dubbing the counter rally “Win with Love,” and it’s scheduled to take place at 5 p.m. Tuesday afternoon at the Stonewall Bar, just blocks away from the Trump event.

“Hate, division and greed have no place in Florida,” says Orlando resident Christopher J. Cuevas, one of the rally organizers. “The Trump administration has demonized our most marginalized communities to distract from their own blatant corruption and incompetence. We welcome the opportunity to show the President that Florida isn’t falling for it; we embrace our differences, fight for all marginalized communities, and are ready to win with love.”

Organizers also say that the rally will emphasize the stories of people directly impacted by the president’s policies. They also say there is a possibility that Florida Agriculture Commissioner Nikki Fried will make an appearance.

It’s no surprise that Trump is officially kicking off his reelection campaign in the Sunshine State, since Florida’s  29 electoral votes are considered by pollsters and political analysts as critical for his reelection chances. He defeated Hillary Clinton in the state by just 1.2 percentage points in 2016.

Trump has made more than 30 trips to Florida since being inaugurated in January of 2017, and spent 99 days at his winter White House at Mar-a-Lago in Palm Beach, according to NBC News.

“I think he understands Florida issues more than other presidents who didn’t have as much of a relationship with Florida,” Gov. Ron DeSantis told reporters earlier this week, according to the News Service of Florida.

Although Tuesday’s event is being called his “official” reelection campaign kickoff, Trump actually began his reelection campaign earlier than any U.S. president in history, having filed the paperwork with the Federal Election Commission to run in 2020 just hours after he was inaugurated. He then held his first campaign rally for reelection 29 days later at a hangar at the Orlando-Melbourne International Airport.

COVID-19 is forcing big changes for Floridians and their rights, but is all of...

Kids to state lawmakers: Do something – now – about climate...