Gov. Ron DeSantis’ office acknowledged late Thursday Valenstein submitted his letter of resignation on May 8 but did not make it public until he notified department employees earlier Thursday.

He has worked at DEP since the administration of former Gov. Rick Scott and has served as secretary since 2017.

Valenstein wrote in a letter he addressed to his “team” Thursday that Shawn Hamilton will succeed him as interim secretary of the department. Hamilton is deputy secretary over the Division of Land and Recreation, which manages state parks and the Florida Forever land-conservation program. Hamilton has been with DEP for 13 years.

“With the new agency framework completed and the largest environmental budget in the state’s history secured, it is time for me to step back and DEP to move forward with implementation under a new leader,” Valenstein wrote.

Valenstein said in the internal letter that he intends to “carry on my passion for the environment in the environmental community.” He provided no details.

In his May 8 letter to the governor, Valenstein wrote in part, “DEP and our partners have expedited critical Everglades restoration projects, employed sound science to protect and restore our waterways, funded infrastructure projects to improve our state’s coastal resiliency to climate change, acquired lands through Florida Forever to safeguard Florida’s critical water supply and provided resource-based recreation to residents and visitors.

“The Blue-Green Algae Task Force was created, and our state now has a Chief Science Officer for the very first time. We also saw the naming of the first statewide Chief Resilience Officer, a role I was pleased to take on. These actions laid out a critical foundation for science-driven environmental policy to ensure success through strategic investments in the right projects and initiatives.

“We also worked together to secure the unanimous passage of SB 712, the Clean Waterways Act, landmark legislation that contains a wide range of water quality protection provisions aimed at minimizing the impacts of nutrient pollution that can cause harmful algal blooms. The legislation also proved that seemingly disparate stakeholders can work together for the betterment of Florida’s environment. House Bill 1091, which also passed the Florida Legislature unanimously, was also signed into law, which increased penalties for sanitary sewer overflows by 100 percent and all other environmental penalties by 50 percent.”

Environmental organizations  had high hopes early on that DeSantis would empower Valenstein to do much more for Florida’s environment than was possible under Gov. Scott. Some were disappointed.

“Inasmuch as part of his tenure involved working in the Scott administration, perhaps his biggest accomplishment was preventing the department from completely devolving into a mere shell of its former self,” said Jerry Phillips, director of Florida Public Employees for Environmental Responsibility, or PEER, in a message to the Phoenix.

“That said, we have not seen significant improvement in the department under Governor DeSantis. Were it not for a handful of major cases apparently designed to present the secretary and governor in a good light, environmental enforcement in Florida has seen only modest improvement and is still far from being effective.”

Sierra Club of Florida said DeSantis does not deserve to claim he is an “environmental” governor and accuses his senior staff of “greenwashing” his record.

“Anything positive he [Valenstein] may have done over the years has been completely overshadowed by his insistence on greenwashing governors DeSantis and Scott. We need a secretary who will protect the environment, not the governor,” said Cris Costello, senior organizing manager for Sierra Florida, in a message to the Phoenix.

DEP’s communications office released these comments it gathered from three other organizations.

“Few people are as experienced in Florida environmental policy and as focused on restoring America’s Everglades as Noah Valenstein,” said Eric Eikenberg, CEO of the Everglades Foundation, where Valenstein once served as director of legislative affairs. “Under the leadership of Governor Ron DeSantis, he presided over a period of historic activity by the DEP to help steer a number of long-overdue projects toward completion that, once operational, will cut algae-causing discharges and nurture the Everglades and Florida Bay.”

“Florida has been well-served with his initiatives and guidance,” said Temperince Morgan, executive director of the Nature Conservancy in Florida. 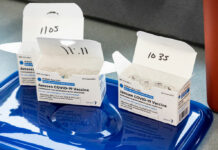 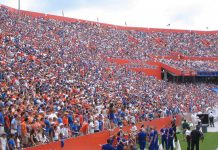 DEP Secretary Valenstein resigns; says he will continue to work in ‘environmental community’

Environmental-protection and home-rule groups call on FL governor to stand up...