Parts of a massive and controversial toll-road construction project through swaths of wild and rural Florida will likely go away — but that doesn’t mean there won’t be new toll roads or highways that would cost millions.

As legislators this session work to pare down the expensive original project — a 2019 pet of former Senate President Bill Galvano — a new plan advancing in the Florida Senate still prioritizes two projects: upgrades and expansions along a 130-mile stretch of U.S. 19 from Citrus County (on the state’s central west coast) to I-10 in Madison County (in north Florida) and a northerly extension of the Florida Turnpike to a point yet to be determined.

The newly proposed projects would extend the Suncoast Parkway northward from Tampa and extend the Florida Turnpike beyond its terminus at Wildwood, where it intersects with I-75.

Critics of her bill praise it for downsizing the Galvano project but say the tolled and untolled roads authorized in her bill still needlessly pose a threat to sensitive natural areas, farmlands and historic rural communities.

Also, they are not ranked high among the state’s long-term transportation needs. Furthermore, the funding authorized in the original project would remain earmarked for road work, rather than reverting to the state’s general fund as preferred by lawmakers who want to just scrap the whole thing.

Galvano’s project, made law in 2019, calls for three toll-road corridors through three rural parts of Florida, with work to commence by 2023.

The planned corridors, spanning roughly 330 miles, are called Multi-use Corridors of Economic Regional Significance, or MCORES. Galvano championed the project as a means of bringing economic development to poor, rural communities and to enhance hurricane-evacuation routes. Critics said the highways would benefit road builders and developers more than anyone else.

Florida Conservation Voters and other critics dubbed MCORES the “Roads to Ruin” project, citing its hefty price tag, damage to undeveloped parts of Florida, and opposition even from many of the rural communities it was billed as helping.

Like MCORES, the projects in Harrell’s Senate Bill 100 could bring a lot of road work to District 10, represented by Senate President Wilton Simpson, who signaled early in the 2021 legislative session that he supports repealing the project favored by his predecessor, Galvano.

“SB 100 [Harrell’s bill] represents a project that will benefit a handful of Floridians … at the expense of other taxpayers whose priorities may be left unmet,” said Lindsay Cross, government relations director for Florida Conservation Voters, in interviews with the Phoenix.

In testimony before the Senate Appropriations Committee Thursday, Cross said Conservation Voters questions “whether our taxpayer dollars should be spent preferentially in these areas, while congestion relief and road repairs are desperately needed throughout our state.”

Pinellas County Democratic Rep. Ben Diamond said his district is among those where road projects ranked high among Florida Department of Transportation strategic priorities have been set aside during the budget crisis.

“We have some very important projects in the five-year plan … that are now delayed,” Diamond said, criticizing efforts to rewrite the DOT priority list.

Transportation revenue over the next five years is expected to fall short of projections by nearly $3 billion, resulting in 23 road projects being deferred and 54 being deleted, according to a DOT report presented to a Senate budget committee on Feb. 9.

Diamond is co-sponsoring a bill to repeal MCORES and return the earmarked funds to the state’s general fund. His bill is getting no attention from Republicans who control the House of Representatives.

The No Roads to Ruin Coalition, comprising local governments, conservation groups, local business owners and community representatives, fought the adoption of MCORES, saying the massive toll roads would destroy wildlands, farmlands and historic towns in their path. They stressed that even the Department of Transportation had not worked such roads into its long-term plan for projects most-needed around the state.

Three task forces assigned to evaluate and shape the plans for their respective regions also panned the concept and instead called for improvements of existing roads that would cause less damage to natural areas, historic towns, African American communities, and farmlands.

Their reports, urging more sensitive and less-destructive ways of addressing growth and transportation needs, are now included in SB 100, thanks to an amendment demanded by Democrats.

“We have over a thousand people a day moving to the beautiful Sunshine State,” Harrell told lawmakers on Thursday.  “Senate Bill 100 builds on the task force recommendations. … It allows us to address congestion on I-75 and really look at our rural roads … to address the growing needs of our state.”

Polsky told the Phoenix Harrell’s bill is a big improvement over the 2019 MCORES bill, but she wants it gone, especially amid the coronavirus pandemic when Floridians need unemployment, health care and housing assistance a lot more than they need new toll roads.

“I want to stop it in its tracks,” she said. “We’re in a financial crisis. I would prefer that none of this project get done.”

Florida Conservation Voters, the No Roads to Ruin Coalition, and the three MCORES task forces say they are pleased that SB 100 at least would eliminate the prospect of building a toll road through southwest Florida through sensitive lands including rare habitat for endangered Florida panthers. But they would like to see the highway bills just go away.

“What is clear is that [SB 100] could allow for new tolled or untolled roads within the footprint of the Northern Turnpike and Suncoast Connector corridor areas,” Cross said in Senate testimony this week. “This will bifurcate natural and rural areas and impact our critical water resources and springs.

“At nearly 130 miles as the crow flies [of construction on the U.S. 19 project alone] … there could still be significant impacts on our environment and rural communities.”

Harrell’s bill was approved Thursday by the Senate Appropriations Committee and is fast-tracked for a vote in the full Senate in the near future.

The Polsky-Diamond bills have yet to be heard in any committee. Diamond said he hopes the subject of fully repealing MCORES will come up again later in session, during budget negotiations between the House and the Senate.

The bottom line, Harrell said to senators Thursday, is that if her bill, with amendments accepted so far and possibly more to come, is not adopted in both the Senate and the House, the MCORES legislation likely will remain in force and will proceed. 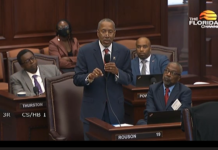 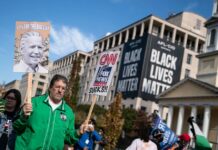 Nearly a year after George Floyd’s death, a start for police reforms in FL — but, ‘we have a long way to go’

While millions in FL seek COVID vaccinations, thousands are declining the...

DeSantis’ new moratorium on evictions, foreclosures will help some, but not...