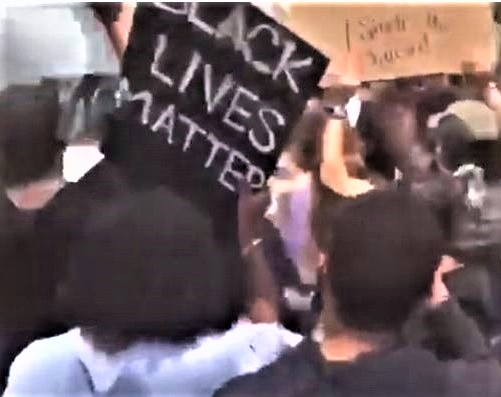 Gov. Ron DeSantis played another culture-war card Wednesday, vowing to expel from Florida’s public schools any study of “critical race theory,” which examines the way race has shaped American society and institutions, which he denounced as “ideological or faddish.”

The remarks by the governor, who’s two years from seeking reelection and perhaps four from a run for the presidency, fit into a broader conservative effort to delegitimize research into the extent to which racism in America is not just a matter of interpersonal bigotry, but rather is enforced through laws and cultural mores.

They followed other demonizations by the governor of conservative culture-war bête noirs, including social media companies Republicans accuse of “cancelling” conservative voices and the Black Lives Matter protests that followed the police killing of George Floyd last year.

He supports crackdowns on both of these social forces now pending before the Florida Legislature.

A senior legislative Democrat said the governor was attempting to exploit racial divisions.

“He’s intentionally trying to agitate along racial lines. He’s trying to use Floridians’ differences of skin color to benefit his own political career, and it’s gross. But, I mean, that is kind of the modern age of politics right now. He’s just doing what his political godfather has shown works on the national stage,” said Evan Jenne, co-chair of the Florida House Democratic Caucus.

“If hatred is going to be the policy move of the day, we’re in a real bad spot. Especially someone in the governor’s position, of being the executive for the entire state of Florida, I would certainly hope he would try to bring people together more than divide them. But apparently, the math he wants to work with is division not addition,” Jenne said.

DeSantis spoke during a news conference in Naples in which announced plans to ask the Legislature to approve $106 million in federal COVID relief to revamp and boost the state’s civics education efforts.

Wednesday, DeSantis added what appears to be a new and potentially repetitive effort in changing education civics standards, saying, “Florida’s civics curriculum will incorporate foundational concepts with the best materials, and it will expressly exclude unsanctioned narratives like critical race theory and other unsubstantiated theories.”

“Let me be clear: There is no room in our classrooms for things like critical race theory. Teaching kids to hate their country and to hate each other is not worth one red cent of taxpayer money,” he continued.

“So, we will invest in actual, solid, true curriculum and we will be a leader in the development and implementation of world-class civics education.”

In fact, critical race theory is an approach to American history that began to emerge during the 1970s to explain the persistence of racism in society. In essence, it’s concerned with institutional racism, the idea that white supremacy so pervades our culture that many people take for granted as the natural order the distortions it imposes on human relations.

“The question of race is primary in the study of American history,” said Bob Holladay, adjunct history professor at the Tallahassee Community College, who has been following Florida’s civics standards for some time.

“I would hate to see this proposal used to deny the importance of racism and racial politics, and so forth, in American history — because that’s being dishonest,” he told the Phoenix.

At the ACLU of Florida, executive director Micah Kubic said:

“When Gov. DeSantis makes comments like ‘there is no room in our classrooms for things like critical race theory,’ what he’s really saying is that he doesn’t want or trust our students to think for themselves. He seeks to silence individuals and impose an alternate version of American history that clearly erases the lived experiences of people in our country.

“Gov. DeSantis should focus on the business of governing the state. Not imposing academic curricula that suits him. We have professionals for that.”

In a recent column, Michelle Goldberg of The New York Times detailed a national backlash on the political right against critical race theory, including efforts during the Trump administration to identify federal contracts and spending related to the discipline, which it called “un-American propaganda.”

Individual states controlled by Republicans also are disfavoring the theory.

One target of the opprobrium is the Times’ 1619 Project, which traces how the institution of African chattel slavery disfigured American society before we were even a country. A curriculum drawing upon the project has been developed for public schools, although an Education Department spokeswoman didn’t know whether any school district in Florida has adopted it.

As an article published in January by the American Bar Association described the theory:

“It critiques how the social construction of race and institutionalized racism perpetuate a racial caste system that relegates people of color to the bottom tiers. CRT [critical race theory] also recognizes that race intersects with other identities, including sexuality, gender identity, and others.

“CRT recognizes that racism is not a bygone relic of the past. Instead, it acknowledges that the legacy of slavery, segregation, and the imposition of second-class citizenship on Black Americans and other people of color continue to permeate the social fabric of this nation.”

To the political right, that amounts to “reverse” racism intended to lay a guilt trip on white people. Writing in the Wall Street Journal in October, Christopher F. Rufo, director of the Discovery Institute’s Center on Wealth and Poverty, called it “a deeply ideological agenda that includes reducing people to a racial essence, segregating them, and judging them by their group identity rather than individual character, behavior and merit.”

The culture war between conservatives and progressives over matters like race, abortion, and “cancel culture” came to dominate the GOP agenda under President Trump.

So much so that the Republican National Convention didn’t even bother to adopt a platform last year, saying only that the party “has and will continue to enthusiastically support the President’s America-first agenda.”

On Wednesday, the governor suggested his proposal would complement initiatives already before the Florida Legislature.

As for the civics education money, the governor said that, because it came in a federal grant, he could have earmarked the cash under his executive authority. “But, instead, I think the proper thing to do is work with the Legislature, have them appropriate money like we normally do.”

DeSantis wants to create a “Florida Civics Seal of Excellence,” which would be a credential that teachers could earn if they undergo training developed by “national leaders in civics professional development.”

Teachers who earn the credential would be eligible for $3,000 bonuses.

Another $16.5 million would pay for broader civics education training for principals and teachers through seminars and virtual sessions in specialized civics classes as well as disciplines like English and history. And he would invest $17 million in developing the curriculum.

The governor also wants to invest in internships for high school students interested in working for state and local governments.

He acknowledged the program would rely on one-time federal funding, but argued it would “provide a meaningful influx of civics teacher resources, curriculum, and classroom supports in our schools.”

He did note that future support could come from the Elementary and Secondary School Emergency Relief fund, which Congress approved last year to help schools recover from COVID.

DeSantis also noted that graduating seniors will be required to pass a civics test similar to that given to applicants for citizenship. He’d directed Education Commissioner Richard Corcoran to establish the requirement in December 2019, although COVID classroom disruptions delayed planning.

The governor did not elaborate on what he meant by “national leaders” who would help develop the curriculum.

But in 2019 the Legislature voted to require the Department of Education to consult with Hillsdale College, a small, private, Christian college in Michigan that’s connected to former U.S. Education Secretary Betsy DeVos and Anne Corcoran, wife of Education Commissioner Richard Corcoran.

Also involved was the Bill of Rights Institute, supported by the libertarian Koch family and its foundations.

For his part, DeSantis, too, viewed the academic movement, which seeks to explain racial divisions, as instead fomenting them.

“Over the last many years, maybe decades, understanding what our country was founded on, understanding the civic tradition, the Constitution, all these things, has become very much a lost art,” DeSantis said.

“If you go into a lot of these universities now, even, and you want to study some of the foundational principles of our country and our society, it’s a lot harder to find those courses — which would have been in the past something that everyone would be expected to know.

“Instead, they engage in these politicized academic fads and offer courses that reflect what is really ideology, not actual facts. And so, we have an opportunity to get it right.”

As for last year’s civics education review by the Florida Department of Education, the agency highlighted four themes related to foundational documents, comparative studies of other nations’ governments, civic pride and engagement and citizen rights and responsibilities.

The themes as they are written show no mention of the critical race theory. The department has indicated that it will complete the revisions of civics standards this summer.

Meanwhile, lawmakers are getting involved during the legislative session.

State Sen. Jeff Brandes, a Republican who represents part of Pinellas County, is sponsoring SB 146, which calls for a non-partisan civic literacy practicum for high school students, who would create portfolio regarding issues within their communities and develop plans to address them.

“The purpose of the practicum is to inspire meaningful civic engagement and help students learn how governmental entities at the local, state, or federal level interact with the public which they represent and serve,” the bill reads.

Zika’s bill, HB 5, would “help students understand their roles, rights and responsibilities” by adjusting the civic education curriculum to “include a comparative discussion of political ideologies that conflict with the principles of freedom and democracy in the nation’s founding principles.”

The bill language explicitly cites communism and totalitarianism as such conflicting principles.

In addition, the bill includes a section that would integrate “portraits of patriotism” into civic education.

According to the bill language, the portraits would be “diverse individuals who demonstrate civic-minded qualities” and would include “first-person accounts of victims of other nations’ governing philosophies.”

Due to COVID, it’s not likely that FL will meet the threshold for testing students required by federal law

The 2020 elections: State and local races could influence Florida’s future...