A few years ago, I went camping with my kids’ Boy Scout troop in the Green Swamp. We pitched our tents on the bank of a sparkling creek, so far from civilization that getting a cell signal proved nearly impossible. It was glorious.

Politicians who rave about saving the Everglades never mention the Green Swamp. That shows you their ignorance. I would argue that the two are of roughly equal worth, and not just because unscrupulous scammers once sold gullible Yankees thousands of acres of swampland in both of them.

No, what they have in common is water. Without the Everglades, South Florida would be mighty thirsty. Similarly, the Green Swamp is the source of four of the state’s major rivers, the Hillsborough, Withlacoochee, Ocklawaha, and Peace. That means it’s providing drinking water to an awful lot of Floridians. (Honestly, the one thing the Everglades has that the Green Swamp doesn’t is pythons.)

“Protecting the Green Swamp is vital to protecting the quality and quantity of Florida’s water supply,” one state water agency website says.

But some people care more about sand than water.

A couple of weeks ago, the Lake County Commission spent more than two hours wrangling with a request from the Central Florida Sand Mining Association to make a big change in the county’s comprehensive growth plan.

The miners’ goal: Dig up more sand in the Green Swamp.

When you think about mining in Florida, you probably picture the phosphate industry, which digs up a key fertilizer ingredient, processes it, and then piles up its waste into the closest thing Florida’s got to actual mountains.

Sand mining is a pretty big deal, too. The sand is necessary for making concrete, which means it’s crucial for building roads and houses and stores and office buildings. Given how fast we pave over everything in Florida, you can imagine how much sand that requires.

After listening to the miners and the public and the local activists, then discussing the issue, a majority of the Lake County Commission — in a move that may surprise you — balked at the miners’ request. You might even say they didn’t dig it at all.

“I don’t have a problem with the mining industry,” Commissioner Kirby Smith of Tavares explained. “The problem I have is that it’s in the Green Swamp.”

Critical state concern for a swamp

Nobody in authority paid much attention to the Green Swamp until 1960, when Hurricane Donna followed a particularly rainy summer and unleashed flooding throughout Central Florida.

Then, as it did with the Everglades, the U.S. Army Corps of Engineers swooped in with a plan to fix the flooding. The plan, called the Four Rivers Basin project, called for turning the swamp into a series of flood-control mechanisms.

Unlike with the Everglades, Florida officials figured out that this was a bad idea and stopped it. Then the newly created Southwest Florida Water Management District bought a big chunk of the swamp to prevent it from ever being developed.

In the early 1970s, after Walt Disney World opened just to the east, pressure grew to convert what remained of the Green Swamp into strip shopping centers and suburban lots. To fend off this threat, in 1974 the Legislature — yes, that same decision-making body that today seems to be a constant threat to life and liberty — declared the Green Swamp an “area of critical state concern.”

What’s that mean? The term “denotes areas that contain natural resources of regional or statewide importance,” explains the water management district website. Thus. any attempt at changing an area of critical state concern is supposed to get extra-special scrutiny.

The only problem is, a lot of stuff had already happened in the Green Swamp — sand mining, for instance. The sand found in the drier parts of the swamp turned out to be an exact match for the kind that’s preferred for making concrete.

One particularly colorful miner, Emil Jahna Jr. — nicknamed “the Original Sandman” — opened his first mine in the early 1950s. His company supplied the sand that built both Disney and I-4. According to the Orlando Sentinel, Jahna “prospected by inspecting crumbs of sand around ant hills and gopher [tortoise] holes.” Then that’s where he dug (sorry, tortoises).

But those high, dry spots in the swamp so eagerly sought after by the ants, gophers, and miners are crucial to its water supply function, according to Charles Lee of Audubon of Florida.

“Wipe out the Green Swamp uplands and turn them into sand borrow pits,” Lee told me this week, “and you will have altered the basic hydrology of the Green Swamp, big time.”

Because sand mining began before the Green Swamp was legally protected, though, it’s allowed to continue on about 7,000 acres of the Lake County part of the swamp. Eight mines are active there. Aren’t you glad other old Green Swamp businesses didn’t get grandfathered in too, like moonshining and dumping old car batteries?

Even as the mining messes with the Green Swamp, the miners themselves are doing their best to suck the aquifer dry. A 2017 analysis by the Orlando Sentinel found that the three biggest water users in Lake County are sand mines.

Anyway, the five mining companies that operate there have run into a problem. Lake County’s comprehensive plan for future growth includes a rule that limits expansion of their mining operations, and this they cannot abide.

However, it’s their own fault. And their argument for overturning it is one of the stranger ones I’ve ever run across.

The Lake County comp plan says that, within the Green Swamp, any development needs to leave 90 percent of its land for open space. That helps to preserve the swamp’s natural status.

When the plan first went into effect, the part about open space in the swamp didn’t mention sand mining, which was fine with the miners. But around 2012, the county updated the comp plan and said that the open space requirement applies to the miners too, at least in terms of any new mines or expansions of existing mines.

The sand miners did not jump up and down and scream objections. They were quiet, according to Central Florida Sand Mining Association president Tracy Mouncey, because they were what is technically known as “asleep at the switch.” Maybe the real Sandman made them all take a nap.

“I don’t have an excuse,” Mouncey told the commissioners. “That was a miss on our part.”

I’m pretty sure this situation falls under the widely known legal principle of “tu dormis, tu perdis,” which is Latin for “you snooze, you lose.” Objecting to the change now seems hundreds of days late and thousands of dollars short, yet that’s exactly what the miners are doing.

Meeting the open space requirement isn’t impossible for the miners. Last year, Jahna’s company got a new Green Swamp mining permit while meeting the 90 percent open-space requirement. That proves it can be done.

Mind you, that didn’t leave Jahna Industries much to mine — just 4 acres out of 56, according to the county planning director. But that’s not the point, is it? The point is to maintain the Green Swamp as a special place and protect its natural resources.

When the miners found out they were subject to the same open-space requirement that everyone else has to comply with, Mouncey said, “We were like, ‘We’ve got to fix that! That’s not right.’”

Despite the fact that Jahna Industries got a permit, a consultant hired by the miners argued that making them abide by that requirement “isn’t economically feasible.” What that means is they can do it, but they won’t make the kind of money they want to make.

So their argument to the commissioners is — are you sitting down? — that if the commissioners eliminated that pesky open-space requirement, then they could comply with it by postponing complying with it. Did you follow that?

In other words, they shouldn’t have to worry about open space until they’re done mining every grain of sand from that spot. Once they’re finished, though, and have shut down their processing plant and stopped sending big trucks up and down the roads they built, why then they can convert the whole thing to open space! One hundred percent, not just 90! It’s a win-win!

Mining should be treated differently, Mouncey explained, because it’s different from other activities. You see, it’s just a “temporary use,” she said, because, ultimately, the miners would put everything back the way it was, or even better.

“We are conservationists and environmentalists at heart,” she told the commissioners with a straight face.

Not one member of the public who spoke at this meeting thought much of this argument. One of them was Marty Proctor of the Villa City Community Association, who pointed out that one of the mines has been running since 1969.

“That’s not temporary,” he said.

Despite that, and some 150 emails urging them to vote no, one commissioner announced he was totally fine with giving the miners whatever they wanted.

Two others made it clear they believed preserving the Green Swamp was more important than preserving the miners’ profit margin. One of them, Commissioner Doug Shields, said protecting the swamp was the reason he’d been elected — it’s in his district.

The last two of the five commissioners, Smith and Leslie Campione of Mount Dora, expressed misgivings but said they had too many questions still unanswered. At their urging, the commissioners postponed their decision until July 13.

Campione mentioned some concern about the political fallout of denying an industry what it wants. Given how the Legislature has been bigfooting local governments left and right lately, her point was that a local government that saves a swamp is liable to find its actions undercut by the bullies in Tallahassee. You know how bullies like throwing sand.

“We may get the right to make these decisions taken away from us,” she said.

To ward that off, I say we urge our legislators to spend a weekend camping in the Green Swamp. They need to get away from the well-heeled lobbyists who speak for the pavement and the concrete, and get out where the cell towers don’t reach. Then they’d find out what’s really important, especially when they get thirsty for a cool glass of water that’s free of pythons. 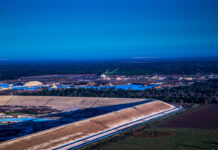 Piney Point threatens Tampa Bay, but other FL estuaries are in trouble, too 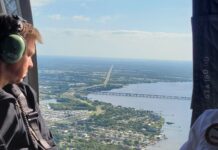 Ginnie Springs and Seven Springs Water Company: Profit ahead of the...