WASHINGTON — Democrats are eyeing programs to support U.S. farmers — who have suffered catastrophic losses from severe weather events in recent years — in reducing carbon emissions on their land.

In his first major policy hearing as House Agriculture Committee chairman, Rep. David Scott (D-Ga.) said that the issue of climate change would be key for his panel this year. He wants to encourage farmers to adopt conservation practices that can mitigate climate change.

Scott, the first Black chairman of the House Agriculture Committee, has identified climate change, racial inequities within the agriculture industry, and food insecurity as his top priorities this year.

Scott called on agricultural producers and lawmakers on both sides of the aisle to find agreement on the issue — even though climate change has been divisive.

“This is critical. I want us to move forward with this with an open heart and an open mind,” Scott said.

About 10 percent of the total U.S. greenhouse gas emissions come from agriculture, according to a report from the U.S. Environmental Protection Agency. Agriculture can also be a source of carbon offsets through soil management, cover crops, conservation projects, and forestry.

Recent research suggested that a global effort to replenish soil and remove carbon already in the atmosphere could result in a 10 percent carbon reduction.

“Weather is becoming more volatile as the earth warms at an alarming rate and that puts the very people who make a living off the land, American farmers, in the cross-hairs of economic peril,” Weather Channel meteorologist Jim Cantore of Atlanta told lawmakers during the hearing.

“Honestly, we simply can’t afford to accept that these events are the norm,” said Rep. Cindy Axne (D-Iowa), noting the millions of acres of farmland that had been destroyed in the derecho and flooding in Iowa in the past two years.

“We have to take action on this climate crisis to reduce our carbon emissions and build up resiliency so our farmers can be successful.”

The hearing came as the Biden administration considered options to incorporate agriculture in its plans for ”net-zero” greenhouse gas emissions by 2050. Agriculture Secretary Tom Vilsack has said he wants to create incentives for farmers, ranchers, and foresters to use more environmentally friendly practices.

Vilsack said during his confirmation hearing that he would like to build markets to pay farmers to sequester carbon and capture and reuse methane. The Senate voted, 92-7, Tuesday to confirm Vilsack as agriculture secretary and he was sworn in on Wednesday.

Republicans at the hearing said they are open to discussion on climate and agriculture, but insisted that any programs for farmers should be voluntary.

“If you’re not at the table, you are probably on the menu, and for too long the agriculture sector has been on the menu when it comes to climate. The hearing today begins to pull us up to the table,” said Rep. Glenn Thompson, (R-Pa.).

Thompson and other Republicans want to avoid regulations that would mandate carbon reductions. They also want to keep any climate change programs for farms under the authority of the Agriculture Department, not the EPA.

“Our approach must favor pro-growth solutions over regulations,” said Thompson. “There has been a lot of talk about legislation or executive action, but I believe many of these are a solution in search of a problem.”

Work on the issue could gain momentum on Capitol Hill this year, with Democrats controlling the agenda in both chambers.

Scott, who has also expressed support for rejoining the Paris Climate Accord, is more in line with Democratic leadership on climate than his predecessor as committee chairman, Collin Peterson of Minnesota. Peterson was a conservative Democrat who frequently voted in line with Republicans.

Spanberger told colleagues at the hearing that she would reintroduce it in the coming weeks, along with more targeted legislation on healthy soil and resilient farmers.

“Agriculture can be and is part of the solution in addressing climate change,” Spanberger said, noting that she would continue to explore the issue as chair of the Subcommittee on Conservation and Forestry.

Her proposal directs the Agriculture Department to develop a program to assist farmers in participating in carbon markets and establish a system to certify third-party vendors. Participation would be voluntary.

When Spanberger introduced it last year, it had bipartisan support with 20 cosponsors in the House — 11 Democrats and nine Republicans.

Rep. Chellie Pingree (D-Maine) is pushing her own bill, the Agriculture Resilience Act. The legislation aims  to reduce net greenhouse gas emissions from agriculture to zero by 2040.

Pingree, who owns an organic farm in Maine, introduced the comprehensive climate change bill last year and reintroduced it last month. It would boost funding for farmland conservation programs and research at the Department of Agriculture, support pasture-based livestock, and aim to reduce food waste.

“I have worked on this topic for a long time. I care deeply about it, and I encourage many of you to sign on to my legislation. I think there is a lot we can agree on,” Pingree said during the hearing.

Her proposal has 28 cosponsors, all of them Democrats, including Jamie Raskin of Maryland, Matt Cartwright of Pennsylvania, Gerald Connolly of Virginia, Kathy Castor of Florida, and Mark Pocan of Wisconsin. 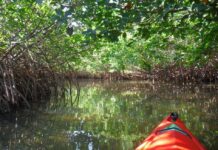 New funding to curb wildfires pushed in Congress, as another fire...

Florida universities get millions they can’t share with DACA students