It’s that time of year, dear readers, when the Florida Legislature gets ready to descend upon Tallahassee like a flock of incontinent pigeons.

The 2021 Session will be a smelly storm of Bad Ideas, the likes of which you haven’t seen since Rick Scott, last seen on the U.S. Senate floor coloring in a blank map of Asia during Donald Trump’s impeachment trial, was governor.

Here are some preliminary pick hits:

HB1 would get tough on protests, especially the ones with too many people of color and young people, marching against, say, police brutality.

It’s already illegal to riot, destroy property, or assault people. This bill is intended to discourage that annoying freedom of assembly thing.

You may have a permit, but if you walk in the street, you’re busted. If you get run over by a car, it’s not the driver’s fault. If you get arrested, you will do jail time.

Guess who gets to decide whether a “protest” is a “riot”? The cops.

Then there’s the proposed law to punish Facebook, Twitter, and other Big Tech platforms which inexplicably banned Donald “Felonious” Trump for, I don’t know, lying about absolutely everything?

HB33 and its Florida Senate companion would allow individuals to sue these merchants of Cancel Culture, these elite monsters of Silicon Valley, for quashing the sacred American right to invade the nation’s capitol.

Even better, the state can fine these digital titans 100 grand per day for suppressing the righteous voices of conservatives.

Actually, a reputable NYU study finds that Facebook, Twitter, Apple, Google and Amazon — what House Speaker and frustrated high school thespian Chris Sprowls calls “the five families of darkness”— are not, in fact, suppressing the righteous voices of conservatives.

But Jack Dorsey, Mark Zuckerberg et al. became, as January 6, 2021, a trifle nervous about the way Donald Trump’s misspelled spewings put his vice-president in danger, enabled a coup attempt, and got people killed.

State Sen. Dennis Baxley, R-the Old Plantation, a man who remains unconvinced that climate change is happening, evolution is real, and that slavery was not a good time for enslaved people, also thinks there’s entirely too much voting going on.

To that end, he’s sponsoring SB 90, which would eliminate standing vote-by-mail requests, forcing citizens to re-apply every election year for a mail-in ballot.

Gov. Ron DeSantis agrees. At an unmasked (and unhinged) indoor rally in West Palm, the governor boasted about Florida’s well-run in 2020 election, then turned around and implied there might be fraud somewhere, somehow, with “ballot harvesting” and too many of the wrong people (you know who he means) voting by mail.

County elections supervisors, who know a little about how this works, strongly object, pointing out that such a law would cost them millions and cut voter participation.

Which is the whole idea.

Not Florida’s cocked-up unemployment compensation. Not stagnant wages or the global climate crisis. Not the coronavirus, though DeSantis does enjoy dangling vaccines before the peasants and implying that they’d better be nice if they want a taste of that sweet, sweet Moderna, otherwise he’ll take his needles and go home.

And that goes double for Enemies of the People.

Last week DeSantis, not known for the length of his fuse, got huffy when a reporter questioned why the pop-up vaccination site in Manatee County was located in the county’s most affluent (Republican voting) area, ignoring the less privileged:  “I’ll tell you what,” said the governor. “I’d be thankful, because you know what? We didn’t need to do this at all.”

Ignore the Will of the Voters

It’s not just the governor who thinks Florida citizens really shouldn’t have opinions about democracy and such like. Some of your legislators think that you need to stay out of lofty matters you don’t understand.

In 2020, you passed an amendment to raise Florida’s minimum wage to $15 an hour over the next five years. But you didn’t really mean it, did you?

State Sen. Jeff Brandes, who clearly believes that if you torment the poor long enough and hard enough they’ll just stop being poor–or die, whichever comes first–is sponsoring a bill to allow employers to pay ex-felons, the under-21s, and other undesirables $10 an hour instead.

From classroom sizes to conservation lands, it’s an old Florida tradition for governors and legislators to ignore or thwart what the voters put in their Constitution.

Just hush. These white men know better than you.

And don’t think you can just sue your employer for letting COVID run wild in the workplace. Brandes, along with CFO Jimmy Patronis (still trying to get the Olympics to Florida, along with the New York Stock Exchange) wants to make sure money-grubbing nursing home staff, waiters, and grocery store workers can’t get sick and take a business to court for failing to require social distancing or masks or other infringements on Americans’ freedom.

No session would be complete without an attack on higher education. Check out SB 264, requiring Florida universities to survey ideological freedom on campus, ensuring that students are exposed to a “diversity of viewpoints,” especially conservative ones.

Republican legislators are weirdly convinced that what we do in universities is indoctrinate our undergraduate flock in hardcore Marxist theory, forcing them to read Engels all day and sing “The Internationale” in both French and Russian every morning before breakfast.

Barney Bishop, former president of Associated Industries of Florida, a man boldly on the wrong side of every Florida issue from water quality to corporate tax cuts and a supporter of this monumental waste of time, likes to mutter darkly, “Cancel culture only goes one way.”

I guess the commie eggheads were in Cancun or somewhere, taking a break from the sweaty work of canceling stuff, when white supremacist Richard Spencer, as well as  Donald Trump, Jr. and his shouty girlfriend, addressed the students of the University of Florida (Junior got paid 50 grand, too), or that time a mere five years ago when the FSU College Republicans hosted Milo Yiannopoulos, provocateur and professional idiot.

FSU, by the way, is home to an in-house über-capitalist think tank, but sadly lacking in a left-wing equivalent.

State Sen. Manny Diaz, Jr. R-Red Scare, a man who obviously doesn’t have enough to do, is sponsoring a resolution denouncing Democratic Socialism, because you never know when, say, Denmark, might decide to invade.

He’s also the brains (if that is the correct term) behind a proposed constitutional amendment to stop Joe Biden and the Democratic Socialists (see Denmark above) from “taking control” of Florida’s immaculate healthcare system by requiring a two-thirds majority vote in each house of the legislature.

But don’t you worry your pretty little heads. Go to the beach. Or a bar. Leave the mask at home.

Florida’s lawmakers will take care of you. And the governor is on top of the really big stuff–like honoring deceased racist, homophobe, misogynist and Florida Man Rush Limbaugh by lowering flags to half-staff.

We assume he means all the flags, not just the Confederate flag.

FL House delivers a big win for GOP in voting to restrict COVID-related lawsuits; opponents won’t give up fighting the bill 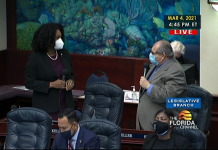 One more hurdle to go, and the House will pass legislation to protect businesses from COVID lawsuits