Gov. Ron DeSantis’ anti-mob legislation drew a barrage of public condemnation Wednesday when it was heard publicly for the first time in a Florida legislative committee.

After two and half of hours of heated public testimony, the bill passed 11-6 on party lines and advances to its next committee hearing.

So many witnesses signed up to testify that committee chair Rep. Cord Byrd, a Duval County Republican, limited public testimony to one minute each and turned off microphones when speakers, who had been promised three minutes, tried to speak longer. Even 78-year-old American history teacher Barbara DeVane, with Florida NOW, was silenced and ushered away from the podium by a security officer after speaking for more than one minute.

Key provisions of HB 1 would prevent any defunding of law enforcement agencies, broadly expand penalties against people affiliated with a protest that becomes “disorderly,” further criminalize the damaging of historical monuments, and provide a legal defense for motorists who “accidentally” run over a protester obstructing a public roadway.

A stream of witnesses called the proposal the “censorship and suppression bill” and blasted DeSantis and bill supporters for prioritizing it over statewide crises including COVID relief and unemployment.

Lawmakers heard more than two hours of public testimony and said they received many hundreds of calls, emails and letters from concerned citizens.

Republicans spoke in favor of the bill, saying it would deter potential violence and injury of law-enforcement officers.

“The purpose of this bill is to prevent lawlessness,” said Rep. Byrd.

“Florida has a lot more than 99 problems and this bill doesn’t solve any of them,” said Rep. Mike Grieco of Miami, ranking Democrat on the committee. “I could not be more down on [this] bill.”

The witnesses described driving for hours from numerous Florida cities to speak against the bill. They said it falsely equates demonstrators in Black Lives Matter protests last summer with the storming of the U.S. Capitol by pro-Trump extremists on Jan. 6.

The sponsor of HB 1, proposed by DeSantis on Sept. 21 in response to Black Lives Matter protests and violence that erupted in Portland, Oregon, said it was simply a measure to deter violence.

“We do not need this bill. It’s overreach. We already have laws on the books that address violence and property damage,” said Trish Neely with the League of Women Voters.

Philip Bieber, pastor of People’s Church of Jacksonville, said he and other clergy predict the “Draconian measures” in the bill would be applied disproportionately to bring criminal charges against Black demonstrators. He called it an “insulting, transparent attempt to silence” political rivals.

Ingrid Delgado, representing the Florida Conference of Catholic Bishops, suggested the bill could be used to prevent Catholic-sponsored gatherings outside abortion clinics and sites of executions.

“The interpretation is outrageous,” she said. “We have the tools to keep us safe. This bill is dangerous and I ask you to oppose it.”

Rich Templin, with AFL-CIO Florida, said the labor movement would not exist without protections for civil disobedience and the right to demonstrate peacefully. 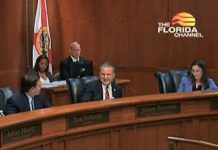 CDC bans evictions through end of 2020 to curb spread of...