Ever since my mom got me my first library card, I’ve been an avid reader. Like a lot of dedicated readers, I keep a running tally in my head of books with great titles — titles that are so intriguing they make you want to read the book regardless of the topic.

My favorite title is probably “The Fools in Town Are On Our Side” by Ross Thomas, but a close second is “Toxic Sludge is Good for You!” by John Stauber and Sheldon Rampton. The first is a novel about small town corruption, while a reviewer called the second “a chilling analysis of the PR business.”

That book’s title came from a campaign to convince people to accept that it’s OK to dump sludge from sewer plants and septic tanks near their homes. The PR folks advised their clients to change the name of the stuff to “biosolids.” It sounded less frightening, less … oh, what’s the word? Oh yeah, “toxic.” It worked — until the smell got out.

I mention this because last week I heard about a company in Polk County that’s in the toxic slu— er, uh, I mean “biosolids” business, much to the chagrin of its neighbors. It’s called — I swear I am not making this up — the BS Ranch & Farm.

On the Lakeland company’s website, it answers the question, “Who is BS Ranch & Farm?” by saying, “We are a farm of the past, in the present, working for a better future.” I think that last part sounds better if you draw it out: “fu-tuuuuuuuuuuuure!”

I looked up the company’s 2010 incorporation papers and saw to my delight that the corporation listed its purpose as “Improve the Earth.” Honest! That’s what it says!

I also learned that the corporation’s president is named Brandy Stanton (now, the “BS” name makes more sense). She runs it with her husband, Bill.

When I talked to her, she agreed with me that Florida does a terrible job of disposing of its ever-increasing load of fecal material. “We’re the solution to all that,” she said.

The land where their “ranch” is located used to be part of a phosphate mine back in the 1950s. It was used for what the mining industry calls a “clay settling area,” where a miner dumps the slurry full of clay that’s been separated from the phosphate rock.

Over several years, most of the leftover clay dries out, but some of it can still have the consistency of pudding. That makes it difficult to build anything on top of it.

But the Stantons had a plan for a new business on that property. They took Polk County commissioners on a tour to convince them of what a good idea it was, according to Commissioner George Lindsey.

“They stood in front of this hole in the ground” and showed how they were putting in tree trimmings and other yard waste, overripe fruit and sodas that had passed their expiration dates, he told me. Then they showed him “a mound of mulch, 20 or 30 feet high, darker than you would expect to see,” and explained that that was their product. They were using one to make the other.

“They represented that they were taking things of no value and making a product to be sold for soil enhancement,” Lindsey said. “I said, ‘OK, this sounds like recycling on steroids.’”

No one mentioned biosolids or toxic sludge or anything like that, he told me. He and the commissioners voted to approve the comprehensive plan change the Stantons needed to get the project going. Lindsey calls that the only vote he’s cast in nine years in office that he now regrets.

The Stantons “are the beneficiaries of deceit,” the commissioner told me. “Unfortunately, they acted on that misrepresentation.”

Within weeks of the BS Ranch opening its gates, he said, its neighbors reported seeing “tanker trucks carrying treated and partly treated fresh sewage pulling in, and the aroma was just putrid.”

Ms. Stanton told me the commissioner is lying and county officials knew exactly what they were planning: “We couldn’t have started bringing it in if they didn’t know about it.”

Either way, in short order county officials received about 17 truckloads of odor complaints. They cited the BS Ranch for violating county codes and tried to shut the place down, but a judge ruled for the Stantons. The Lakeland Ledger has reported that the county spent $600,000 on its unsuccessful lawsuits.

The Stantons’ relationship with the state Department of Environmental Protection has also been, shall we say, unusual.

They started off with a DEP permit that allowed them to collect all that benign stuff they showed to the Polk commissioners. But then, in 2014, a DEP inspector discovered they were also making money from letting haulers carrying sewage and the waste from septic tank pump-outs dump all that poop on their property.

The Stantons applied for their state sludge-handling permits during a time when Rick Scott was our pro-business, jobs-über-alles governor. During this era, the DEP was basically under orders to avoid telling any polluter “no.”

Thus, instead of rejecting their application, in 2016 the agency issued BS Ranch a pair of unusual permits allowing them to take in and dispose of a total 4,958 tons of yucky stuff every day. One permit said yes to them accepting “industrial wastewater” and the other said it was OK for them to mess with the state’s environmental resources.

“These permits approved a pilot project to biologically treat compost and … biosolids,” Shannon Herbon, a spokeswoman for DEP, told me. “This pilot project is the first and only of its kind.”

A lot of customers lined up to participate in the Stantons’ experiment. Five years ago, the BS Ranch sent state officials a list of their customers showing they were getting stinky stuff from all over: Miami-Dade County, Hillsborough County, Pasco County, the city of Orlando, and so on. I guess you could say they were improving the earth in those places by letting the haulers dump that toxic sludge in Polk County. The only Polk County-based source on that list was the local prison.

I asked Mrs. Stanton if they still have that many customers and if they’re really accepting nearly 5,000 tons of nasty stuff every day.

“I’m not going to talk about numbers,” she said. But she asked where else those locations could dispose of their waste if BS Ranch didn’t exist.

Apparently, there’s gold in them thar piles of poop. In a 2017 legal motion, a BS Ranch attorney estimated the company would make $8 million that year.

When I read over those one-of-a-kind DEP permits, I learned a new word: “putrescible.” The dictionary says it means “likely to become putrid.”

That’s a pretty good description of what happened with those DEP permits.

Once BS Ranch got going, Polk County officials weren’t the only ones who were bombarded with odor complaints. The DEP got a bunch as well.

The state sent out inspectors and issued warning letters and urged the Stantons to fix the smell. In 2019, the DEP even sued the Stantons, but then worked out an out-of-court settlement that resulted in a fine of less than $10,000. Some of that fine was for expanding the “ranch” without bothering to get another state permit allowing it, as well as damaging a small wetland.

A lot of the state and local odor complaints came from Kirk Sullivan, who owns a pool installation company next door to the ranch. He says he’s one of hundreds who have been complaining about the smell for the past four years.

“He is oddly obsessed with us and kind of creepy,” Mrs. Stanton said. She told me, “We’re good people. We’re a family-owned business. We’re not trying to be a bad neighbor.”

Sullivan told me the smell isn’t the main thing he’s worried about. It’s the water.

The Stantons built a large containment berm around their property, because their permits say they can’t let any of that icky stuff leave the farm. But Sullivan says there have been at least three breaches of the berm, allowing the tox – er, I mean biosolids – to flow into a nearby lake that’s part of the headwaters of the Peace River.

He complained to DEP but, except for issuing another warning letter, “the DEP has done nothing.”

Mrs. Stanton said they had had just one breach of their berm, but “all it is is rainwater. The biosolids are in another area.”

Right now, though, the DEP has a chance to take serious action. Those “pilot project” permits were for five years, which means they’re expiring. The Stantons have applied to renew their one-of-a-kind permits, and DEP is studying it.

“That application is still being reviewed,” the DEP spokeswoman told me, “and the department will take public concerns and compliance history into consideration when making a final determination.”

I asked Mrs. Stanton about the permit renewal and she said, “We’ve been working with them on this stuff to make things better. I’m not worried about it.”

But Sullivan is hopeful that the DEP will, for a change, say no. However, he acknowledged that a rejection would set up a whole new problem: How to clean up the mess the Stantons would leave behind.

A denial would certainly be popular in Polk, but it would run counter to Florida’s frequently disastrous environmental history. I think the fools in town are on Sullivan’s side, and they may want to just keep repeating to themselves, “Toxic sludge is good for you!” 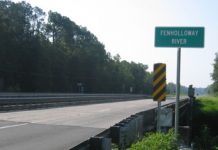 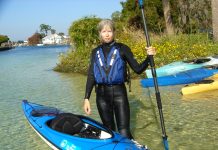 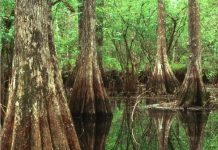 Development would’ve wiped out this FL habitat, but Destiny took a...