It’s hard to imagine what else Gov. Ron DeSantis could do to embarrass himself and Florida more than his heavy-handed pursuit of those who have criticized his failure to contain the spread of COVID-19 in Florida.

His attempt to mimic President Donald Trump’s failure on the virus front is a disgrace.

Does DeSantis wake up every day and think of what he can do that would make him more of a laughingstock?

Parties at the Governor’s Mansion without masks and guests crowded together to see how much of the virus they can spread? His refusal to allow local government officials to impose stricter rules for living in a time of COVID? (Some communities are making their own rules anyway.)

How many Floridians have to die before we get a governor who cares?

Last week, he suggested giving Floridians only one dose of a vaccine instead of two doses recommended by the manufacturers.

Just what we need: half a dose. Where is the “science’’ in that proposal?

The state’s politicians have done little to question the governor or the president.

Instead, that chore has fallen into the hands of Rebekah Jones, a feisty 31-year old woman who has accused the governor and state health officials of trying to cover up the actual number of infections and deaths from the virus, and Daniel Uhlfelder, a Panhandle lawyer who sued the governor in an effort to force closure of overcrowded beaches.

Jones has filed a whistle-blower complaint with the Florida Commission on Human Relations, accusing the Department of Health of firing her because she refused to falsify statistics on an online “dashboard” she created to document the number of COVID infections.

Uhlfelder sued the governor in March after he refused to close crowded Florida beaches. Now, lawyers for the governor are pursuing sanctions against Uhlfelder for pursuing the lawsuit on appeal.

Lawyers for DeSantis have alleged that his appeal of a lower court ruling against the lawsuit was “frivolous or filed in bad faith.” DeSantis overlooks the fact that Tallahassee Circuit Judge Kevin Carroll urged Uhlfelder to file an appeal because he thought the issue should be settled by a higher court.

Jones and Uhlfelder are both taking flak from DeSantis for their attempts to save us from the lack of wisdom displayed by the governor and his minions.

Jones has decided to leave the state after agents from the Florida Department of Law Enforcement raided her home. She says the men held family members at gunpoint during the episode.

In a letter to one of the senior FDLE agents, lawyers said that some of the information seized from Jones is covered by attorney-client privilege and would exceed the scope of the search warrant.

“I’m afraid to stay here,” Jones told the Florida Phoenix on Wednesday. “I’m willing to go to jail, but they came after my family. One of them didn’t even pull his gun until I told him my children were upstairs.”

Somewhere around seven or eight law-enforcement agents participated in the raid at Jones’ house and held the family of four under guard while they searched. Jones said she and her husband, who also works for a state agency, were afraid for their 11-year-old son and 2-year-old daughter.

Jones recorded the scene on her own video camera inside the house. The state agents were not wearing body cameras, but some of the scene was recorded by a Tallahassee police officer who was wearing a camera.

Jones has filed suit against FDLE, Commissioner Rick Swearingen, and two of the agents who participated in the raid. The lawsuit accuses them of terrorizing her children to serve a warrant that was a sham designed to violate her constitutional rights. She is seeking more than $30,000 in damages and the return of her computer equipment and cellphone.

The lawsuit alleges that one agent ran his hands up and down her body “in a way that would earn him a slap in the face in any other circumstance.”

FDLE communications director Gretl Plessinger denied that agents pointed weapons at anyone in the home and released videos made at the scene.

“This video will demonstrate, any risk or danger to Ms. Jones or her family was the result of her actions,” Swearingen said in a written statement. “I am proud of the way these agents performed.” 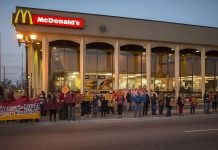 Gov. DeSantis is playing the heavy with people who question his COVID policies