Our governor for the most part has been in hiding for the past month, probably licking the wounds caused by President Donald Trump’s spectacular Election Day loss.

Most of his recent communication with Floridians has been done with videos he occasionally makes and distributes instead of the live press conferences most governors have used in the past. That way there are no embarrassing questions.

Sometimes the reporters who cover the Capitol don’t even know where he is, a break with past governors who routinely disclosed their schedules and travel plans and had frequent press conferences where reporters could ask questions.

Instead, DeSantis has spent the last few years trying to mimic everything Trump does, particularly when it comes to dealing with the spread of COVID-19. He should now be a bit worried about the future.

Political experts in Florida credit a Trump endorsement with getting DeSantis elected in the first place. Few Floridians outside of his old East Coast congressional district had ever heard of him, and he’s likely to draw an unusual number of opponents in 2022.

Since his election to the governor’s office he has mostly dodged serious interviews with reporters so it is sometimes hard to determine what he really thinks.

But last week he inadvertently gave us a glimpse of what he’s really like.

His views were secretly shared with the leaders of the state’s business community at a closed-door Orlando gathering staged by Associated Industries of Florida. Someone in attendance taped his remarks and Politico reporter Gary Fineout has enlightened us with the contents of the tape.

Unfortunately the governor of Florida says he is supporting a fight to overturn legitimate election returns in a number of states that helped defeat Trump.

DeSantis urged Trump to keep fighting despite the fact that judges in state after state have rejected multiple lawsuits filed by Trump’s clownish legal team. They’ve forced recount after recount in several states, only to prolong the drama and add to President-elect Joe Biden’s vote totals.

At this point Trump and his cohorts are using tactics that threaten and intimidate the duly elected people trying to follow state laws as they counted votes. One Georgia official has gone public with death threats he and others have received from Trump supporters.

DeSantis and Trump are unwilling to accept reality and apparently think they can change it with more and more lawsuits filed by a team that has lost every round and provoked only laughter in most courtrooms.

DeSantis, at the Orlando conference, also predicted that Biden will pursue unpopular issues like climate change, but will have to argue before judges Trump put on the bench, suggesting they will rule against Biden.

What kind of governor picks a fight with the nation’s most powerful judge?

Fortunately for America, its judges so far have made decisions based on the facts and the law, ignoring the blustering and whining coming from Trump, DeSantis, and their supporters.

It’s likely that DeSantis and his Orlando audience were unaware of the running tape recorder but it’s a great idea for taking a look at public officials who forget they owe an explanation of their actions to the public.

“I told the president to fight on,’’ DeSantis said at the J.W. Marriott Grande Lakes resort in Orlando.

On Saturday morning, just hours before he headed to Georgia for a rally designed to build support for Republican U.S. Sens. Kelly Loeffler and David Perdue, Trump placed a call to Georgia Gov. Brian Kemp, urging him to ignore the ballots filed by the state’s voters and persuade state legislators to overturn Biden’s victory in the state.

Kemp declined. We know about this because Kemp was kind enough to send out a tweet a short time later.

Makes me wonder how those other state governors feel about the idiot from Florida who is hoping to see courts or electors toss out the votes cast by citizens.

Some of the efforts being made to overturn the votes come awfully close to soliciting a criminal act.  It is particularly concerning that some Trump supporters have openly threatened the safety of election officials who are following the law.

Judges in several states cited the complete lack of proof that illegal votes were cast or counted.

In Nevada, lawyers for Trump claimed the election had been “stolen’’ from Trump. Nevada District Court Judge James T. Russell, like judges in several other states, found that the campaign failed to prove any of its allegations.

In Orlando last week, DeSantis also took time to boast about his own handling of the deadly coronavirus, ignoring the possibility that the handling of the virus likely convinced 80 million voters to reject Trump and select Biden as our new president.

DeSantis, like Trump, has refused to mandate wearing masks statewide or prohibit large gatherings that might have saved the lives of thousands of Americans.

Unlike Trump, DeSantis has at least made his public appearances wearing a mask, though not always.

Makes you wonder how many lives could have been saved. 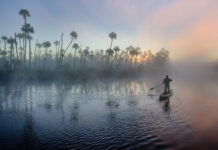 An inadvertent glimpse of what Gov. DeSantis is really like when a secret tape is running

Take down those paywalls: Our citizens need all the news they...

Scare enough people, especially people of color, and Trump might be...