Florida House Republican Anthony Sabatini, a “pro-liberty” firebrand, faces criticism and calls for his resignation because of his inflammatory remarks and actions, including a suggestion that teenage murder suspect Kyle Rittenhouse run for office.

Rittenhouse is a 17-year-old from Illinois accused of shooting three people during a Black Lives Matter protest in Kenosha, Wis., in August. He has been defended by the white-supremacist Proud Boys and President Trump, according to an NPR report.

Former state House members Dwight Bullard and Cindy Polo, both Democrats, have called for Sabatini’s resignation and asked House and Senate leadership to lean on him to stand down or at least strip him of committee assignments, the Florida Politics news organization reported this week.

Sabatini has yet to respond to messages the Phoenix left with his district and law offices. He addressed the matter indirectly on his Twitter feed by retweeting words of support from U.S. Rep. Matt Gaetz, a conservative Pensacola Republican.

“I stand with Sabatini!” Gaetz wrote.

Senate leadership would have no comment, according to a spokeswoman. The House leadership office hasn’t responded yet to a request for comment.

Sabatini, who represents a 77.6 percent white district in Lake County, graduated from the University of Florida College of Law three years ago and is listed as a member of good standing of the Florida Bar.

He has emerged as a forceful defender of President Trump and foe of what he views as government overreach. He just won reelection to his second term in the state House. His legislative bio shows his occupation as: “Officer, Florida Army National Guard.”

Sabatini is perhaps best known for a series of lawsuits challenging local ordinances requiring people to wear masks to avoid COVID-19 transmission. He lost at least seven cases, and one judge warned that he risked being sanctioned for filing “frivolous lawsuits.”

Sabatini’s most recent critics are Bullard, who represented Miami-Dade in the House from 2008 to 2012 and a district that also included Monroe County in the Florida Senate from 2012 to 2016, and now serves as political director for New Florida Majority; and Polo, recently defeated for a second term in a House district in Miami-Dade and Broward counties.

The Phoenix reached out to Bullard on Thursday but hasn’t heard back yet. In remarks to Florida Politics, Bullard argued Sabatini could prove a costly distraction during the legislative session that opens in March.

“We are going into what is going to be one of the most tumultuous legislative sessions on record,” he told the news organization.

“It is absolutely crucial that legislators like Rep. Sabatini do not weigh in on legislation that Floridians need in the time of dual pandemics of COVID-19 and racism, while clinging to dangerous ideals. Everything we’ve known about our rights and protections will need to be addressed this upcoming session and we can’t allow bigoted lawmakers to apply their biases to this important legislation,” he said.

“There’s a lot of talk even within my political party of not wanting to give attention to a person like Sabatini,” Polo said — again, according to Florida Politics.

Although Sabatini wasn’t available to discuss his principles in person, his Twitter feed — and legislation he’s proposed for the legislative session  — hold clues to where he is coming from.


“MAGA,” he tweeted the day before.

As the Phoenix has reported, Sabatini fires up his followers with triggering phrases including “mask Nazis” and “local government mafia.”

Florida Democrats accused Sabatini of encouraging Lake County residents in a social-media post to take up arms against “protesters” who engage in “illegal” activity, but then-House Speaker Jose Oliva declined to sanction him.

In August, Sabatini was “proud to introduce” Trump ally Roger Stone during a GOP event at Trump National Golf Club in Jupiter. Stone’s prison sentence for lying to Congress to protect the president had been commuted a month earlier by Trump.

Sabatini’s proposed legislation includes a bill to allow people to carry guns on college campuses and a measure to repeal a state law that keeps guns and ammunition off store shelves and the streets during public emergencies.

A third measure would prohibit mandatory vaccinations and a fourth would impose eight-year term limits upon members of local school boards.

His vaccine opt-out proposal (HB 6003) would amend a statute governing the state response to public health crises including disease outbreaks. The legislation would eliminate state authority to order vaccination of people deemed a danger to public health, although they still could be ordered to submit to treatment, isolation, or quarantine.

“Proud to file this important bill — we MUST eliminate state’s power to mandate vaccines and instead leave this personal medical decision up to each free individual citizen,” he said, also on Twitter.

“Government should not be able to forcibly vaccinate — it should always be an individual choice.”

Gov. Ron DeSantis, who said Monday that he’s devoting much of his time to planning the roll-out of the new COVID vaccines, has made clear that getting the shots will be voluntary.

However, Sabatini told Newsweek: “We’re not always going to be lucky enough in my opinion to have a Gov. DeSantis. You’re probably going to end up with somebody who is less respectful of personal liberty at some time in Florida’s future.”

Sabatini’s “campus carry” bill (HB 6001) is his third shot at enshrining in law the right to carry weapons on college and university campuses. It would eliminate them from a list of places where concealed-weapons permit holders can’t take their guns (other exemptions apply to the meetings of the Legislature, public schools, career centers, and bars).

The representative argues his bill would let Floridians defend themselves against gun crime, including mass shootings. “The current prohibition makes campuses LESS safe and violates the spirit of the Second Amendment,” he said on Twitter.

The term limits measure (HJR 11) would put it to the voters in 2022 whether to hold school board members to eight years in office. Members of the Legislature and statewide-elected officials are already subject to term limits.

The proposed constitutional amendment “shall take effect upon approval by the electors [meaning the voters], but no service in a term of office which commenced before Nov. 8, 2022, will be counted toward the limitation imposed by this amendment,” the language says.

The idea has been kicked around for a while, and last year a Sabatini-cosponsored resolution to that effect passed the House but died in the Senate.

“EVERY elected official should be term limited. No more career politicians and political insiders — we need citizen leaders. Last year we came within one vote of passing this bill,” Sabatini said.

“Local government tyrants should never be able to shut down a fundamental right like the Second Amendment,” Sabatini explained on Twitter. 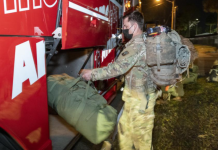 More than 21,000 Guard members from across the country are headed to D.C., and numbers may grow

Florida’s 27,000 ‘Dreamers’ are living their lives in fear and uncertainty