With President-elect Joe Biden on his way into the White House, teacher unions and educators are eager to see U.S. Secretary of Education Betsy DeVos go out the door.

DeVos has been a contentious figure in the Trump Administration and has been widely criticized for lack of experience in the position, among other criticisms.

During Biden’s speech on Saturday, the president-elect made a point to showcase teachers and other educators. He highlighted his wife, Dr. Jill Biden, for her career as an educator.

“Teaching isn’t just what she does — it’s who she is,” Biden said. “For American educators, this is a great day for y’all. You’re going to have one of your own in the White House.”

In Florida, Andrew Spar, president of Florida Education Association, believes that a change in federal leadership will help raise up public schools.

“The Florida Education Association looks forward to the day when the U.S. Department of Education is led by an educator who believes in and supports our public schools, and that day is now in sight,” Spar said in a written statement on Monday.

Randi Weingarten, president of the nationwide American Federation of Teachers, said the union “can’t wait” to start working with the Biden-Harris administration on Saturday.

“We look forward to working closely with an administration that will embrace and fight for the values we hold dear: justice and opportunity for all; strengthened public schools that work for all kids; economic security, starting with decent wages, good jobs and the right to a union; a belief in truth and science; and universal access to healthcare and college,” Weingarten said in a press release.

Teacher union leaders are being considered for the U.S. Secretary of Education, according to The Washington Post.

“People familiar with the planning say those under consideration include two teachers-union leaders: Randi Weingarten, president of the American Federation of Teachers, and Lily Eskelsen García, former president of the National Education Association,” The Washington Post reported on Monday.

The U.S. Education Secretary plays a major role in the nation’s education system, overseeing everything from financial aid to schools across the country to early learning initiatives, among other programs.

However, not everyone is thrilled with a teacher union leader becoming the nation’s education secretary.

For example, a tweet on Nov. 1 from a staffer from a libertarian organization said Biden’s team — if elected — is considering picking the president of a teacher union to be the U.S. Secretary of Education.

In response, Henry Mack, chancellor of the Division of Career and Adult Education at the Florida Department of Education, said in a tweet, “My heart breaks for our students, then.”

Education Commissioner Richard Corcoran, who is in an ongoing legal battle with the FEA on the reopening of schools during the COVID-19 pandemic, retweeted Mack’s sentiment to his own Twitter page. 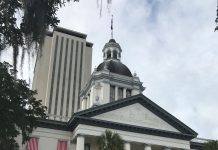 Massive 2021-22 state budget for FL approved: Pitfalls for some struggling families but major gains for others

Despite a state goal, most FL school districts haven’t reached the...