Back in March, the Florida Phoenix wrote about an unusual situation related to COVID-19 deaths: The Florida Department of Health was taking a long time to “count” a death.

In some cases, deaths had not been reported to the public for several days and even up to two weeks, the data showed.

In a Pasco death case, for example, the department posted March 14 as the date the death was counted. The Pasco man was 67. The death was made public in a health department report on Saturday, March 28, two weeks after the death was “counted.”

Those cases and others could be related to travel situations, or other circumstances.

But the length of time between counting a death and the information made to the public could potentially skew the picture as Florida tries to provide an accurate report of deaths.

And now the picture has become far worse, with Florida Surgeon General Scott Rivkees announcing Wednesday that the state “conduct a more thorough review of all fatalities reported to the state.”

“Fatality data reported to the state consistently presents confusion and warrants a more rigorous review,” according to a news release about the issue.

“Of the 95 fatalities reported to the state yesterday (Oct. 20), 16 had more than a two-month separation between the time the individuals tested positive and passed away, and 11 of the deaths occurred more than a month ago.”

Rivkees said in the release: “During a pandemic, the public must be able to rely on accurate public health data to make informed decisions. To ensure the accuracy of COVID-19 related deaths, the Department will be performing additional reviews of all deaths. Timely and accurate data remains a top priority of the Department of Health.”

The state health department also reported that five deaths had at least three months between the time those people were tested positive and died.

The agency reported deaths on Oct. 20, 2020 that included a female, age 58, in Miami-Dade County who died Oct. 6, though the state was aware that the woman had been tested positive back on June 23.

In a similar case, the department reported an Oct. 20 death of a female, age 87, of Palm Beach, who actually died Oct. 1. The department was aware that the woman had been tested positive on June 25.

Of the 95 cases, 18 counties had deaths related to when people tested positive and died, though the agency reported the death on Oct. 20.

The most cases were from Palm Beach County, with 50 of the deaths; 9 from Miami-Dade; 8 from Sarasota, and 5 in Hernando. 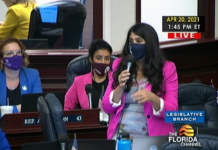