Whether voting by mail or in person in the coming election, Floridians will see six proposed amendments to the state Constitution that they will get to vote on, up or down. The ACLU of Florida believes three of those measures — 1, 3, and 4 — endanger Floridians’ civil liberties and strongly urges voters to vote “NO.”

Proposed amendment #1 adds unnecessary language to the Florida Constitution, which could lead to voter suppression.

This amendment is misleadingly titled, “Citizenship Requirement to Vote in Florida Elections.” The title is intended to fool you into thinking that noncitizens can currently vote in Florida. This is simply false.

The Florida Constitution currently explicitly provides that: “Every citizen of the United States who is eighteen years of age and who is a permanent resident of the state, if registered as provided by law, shall be an elector of the county where registered.” This amendment doesn’t create a citizenship requirement — it makes it more burdensome for all citizens to vote.

Proposed Amendment #1 deletes the word “every” and inserts “only,” so the Constitution would now read: “Only a citizen of the United States … .”  In terms of what is required to vote, there is little difference.

In fact, state law already provides that only U.S. citizens may vote. But, this amendment will embolden lawmakers who are opposed to voting rights to enact unnecessary and burdensome voting restrictions, such as requiring a birth certificate or passport to register and vote.

Most voters have some sort of documentation demonstrating their citizenship, but many do not similarly have ready access to an official copy of some documents. Amendment #1 opens the door to additional obstacles for citizens, particularly those with fewer resources to navigate onerous requirements, to cast their ballot.

This amendment is an anti-immigrant dog whistle. It’s misleading and plays on the hopes that you will be fooled.

Don’t let yourself be manipulated by dirty tricks. Rather than strengthen our democracy or protect our elections, this amendment could lead to unnecessary requirements/restrictions that suppress the right of every citizen to vote.

Proposed constitutional amendment #3 could prevent Floridians from voting for someone of their own party in the general election. Additionally, it will likely lead to fewer elected officials of color at a time when we need more racial and ethnic diversity among our elected leaders.

This amendment, misleadingly titled, “All Voters Vote in Primary Elections for State Legislature, Governor, and Cabinet,” would adopt a “top-two” electoral system that could prevent voters in the general election from voting for members of their own party in state legislative, governor, and cabinet races. This “top-two” measure dictates that all candidates (regardless of party affiliation) are listed on the same primary ballot.

For example, under this “top-two” system, voters may have to choose between two Democrats in certain races. And vice versa — there may only be two Republicans competing in the general, keeping Democratic voters from being able to support someone of their party.

Additionally, this measure will likely make it harder for candidates of color and third party candidates to win elections. At a time when Floridians need greater racial, ethnic, religious, and gender diversity in their elected officials, this measure would hinder those prospects.

In fact, some lawmakers are currently petitioning the Florida Supreme Court to bar the enforcement of the amendment, claiming that insufficient information about the amendment’s impact was presented when it was approved for the ballot.

Top-two primary systems are uncommon in the U.S. and this is the wrong open primary approach for Florida. Our political system needs more diversity, not less.

This amendment is a cynical political effort to obstruct voters’ ability to pass future constitutional amendments, even those with support from a supermajority of voters.

Currently, Floridians have the power to directly enact reforms when elected officials fail to act on the will of the people. In recent years, such changes have included minimum wage, water and land conservation, limits on political gerrymandering, legalization of medical marijuana, and restoration of voting rights for returning citizens.

The Tampa Bay Times reported that some opponents to the proposed amendment say it is being financed by the utility industry, which wants to head off a citizen initiative that would hurt utility companies. Politico has also reported on the millions of dollars donated by unnamed interests in support of the measure.

Passage of this amendment would make it significantly harder for Florida citizens to change their Constitution. Only well-funded special interests will be able to afford to sponsor future ballot initiatives, thus subverting the entire intent of the citizen initiative process as being reserved for the people.

Ballot Initiative #4 is a blatant attempt to block the will of Florida citizens and solidify power in wealthy special interests groups and the politicians that they lobby. 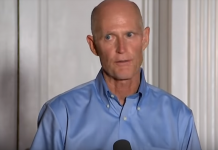 Count every vote: Patience is a Democratic virtue

Homestead: Close the detention prison for good — it’s a human...