Sponsors of proposed Constitutional Amendment 1 spent $8.3 million to give Florida voters the chance to change the words “every” citizen to “only a” citizen when it comes to voting.

Proposed Amendment 1 – “Citizenship Requirement to Vote in Florida Elections” – suggests the absence of a citizenship requirement, which is not true.

The Florida Constitution now says: Every citizen of the United States who is at least eighteen years of age and who is a permanent resident of the state, if registered as provided by law, shall be an elector of the county where registered.

If approved by voters, the new language would be: Only a citizen of the United States who is at least eighteen years of age and who is a permanent resident of the state, if registered as provided by law, shall be an elector of the county where registered.

The Washington Post reported in July 2019 that Gov. Ron DeSantis’ then-spokeswoman Helen Ferré — now the executive director of the Republican Party of Florida — clarified: “In Florida, only citizens can vote. This constitutional amendment would not change the current law.”

The League of Women Voters of Florida analyzed proposed Amendment 1 and recommends voting it down.

“It’s completely unnecessary. You already must be a U.S. citizen to vote in Florida. It’s in the Constitution,” said Patricia Brigham, League president. She said the League’s “antenna” go up when an amendment that seems innocuous is backed by millions of dollars from unidentified donors.

Florida Citizen Voters collected $8.3 million in donations and in-kind contributions since Jan. 1, 2019, according to the Florida Division of Elections, all of it from Citizen Voters Inc., its parent organization whose donors are undisclosed. It was all spent to gather enough signatures to get the measure on the ballot by petition, which it achieved in September 2019. There has been virtually no activity since.

It appears that proponents want to keep non-citizens from voting in Florida elections, even though it already is illegal under state law for non-citizens to vote in Florida.

The Florida Advisory Committee to the U.S. Commission on Civil Rights reported Wednesday that its series of public hearings turned up widespread concerns about voter suppression and disenfranchisement, including concerns about the slowdown of U.S. Postal Service delivery during a pandemic with record levels of voting by mail, but none about non-citizens voting.

“Not once did anyone raise that,” said Nadine Smith, the advisory committee’s chair.

If Amendment 1 purports to cure a problem that doesn’t exist, then why spend $8.3 million?

Sean D. Foreman, chair of the Department of History and Political Science at Barry University in Miami, and Aubrey Jewett, political science professor at the University of Central Florida in Orlando, concur there is no way to prove the ultimate motive of the proposed amendment, but they say signs point to it being something other than it seems.

The two political scientists, who reviewed Amendment 1, think the very suggestion that non-citizens could vote in a Florida election, either legally or illegally, could fire up certain conservatives and ensure they turn out to vote, bolstering votes cast in other like-minded races on the ballot.

“Nobody spends $8 million on an effort that is not important … so there must be something else behind it,” Foreman said. He surmised, “Conservative interests wanted it [Amendment 1] to drive conservative voters to the polls. This [immigration] is an issue that drives Trump supporters in particular.”

“Immigration is a hot-button issue,” said Jewett. “This is a way to mobilize the electorate.”

Jewett compared Amendment 1 this year to Amendment 2 in 2008, the anti-LGBTQ “Definition of Marriage” amendment, even though same-sex marriage was already illegal at the time.

Amendment 1 is sponsored by Florida Citizen Voters. Its chief officer is John Loudon, who did not respond to email requests to be interviewed or respond in writing to a list of provided questions. His campaign’s voice mailbox was full and not accepting messages.

Campaign Treasurer Erika Alba, a Jacksonville attorney, spoke with the Phoenix but offered little insight on its donors or why it has been inactive for months.

“I’m basically just the bookkeeper,” Alba said. “Citizen Voters Inc. has contributed quite a bit. Most of the activity has been signature-gathering … just getting on the ballot.”

Numerous profiles by professional news reporters describe the former Missouri state senator and his wife, Gina Loudon, as Trump supporters with connections to the president. John Loudon is cited as being an adviser in 2017 to “America First Policies,” described by the Annenberg Public Policy Center’s FactCheck.org as a non-profit group formed in 2017 to promote the agenda of President Trump.

Rick Gates, deputy campaign manager for Trump in 2016, also helped create the nonprofit, according to FactCheck, but he was forced to leave the group in March 2017 because of his ties to Paul Manafort, a former Trump campaign chairman and chief strategist. Both Manafort and Gates were indicted on charges of money laundering and tax evasion related to their work for a pro-Russia political party in Ukraine. Both were sentenced.

Gina Loudon is a host and anchor with America’s Voice News Network, a conservative online outlet that also features former Trump adviser Steve Bannon. Bannon was indicted in August in connection with the alleged plunder of a crowdfunding campaign that raised $25 million intended to help build the president’s border wall between the U.S. and Mexico.

America’s Voice News Network announced when Gina Loudon signed on that she is a member of the Trump campaign’s media advisory board, co-chair of Women for Trump 2020, and the public face of Citizen Voters Inc.

Citizen Voters, like Florida Citizen Voters, is based in Florida and is headed by Loudon, according to election records. The group is behind nearly identical 2020 ballot measures in Colorado and Alabama and a successful 2018 campaign in North Dakota.

In a July 2019 opinion piece in the South Florida Sun Sentinel, Loudon wrote, “There is controversy about the extent to which non-citizens are already voting illegally. Most consider this to be a problem, particularly in states that both issue driver licenses to non-citizens and automatically register everyone with a driver license to vote.”

He also said: “Each of these state constitutions say nearly the same thing: “Every citizen shall be an elector … This inclusive language tells us who can vote, but not who can’t vote. That’s why we need the Citizen Voters Amendment.”

Like in Florida, voting rights advocates in Colorado oppose the citizenship amendment, saying it proffers a confusing legal revision that actually is a get-out-the-vote strategy tapping anti-immigrant sentiment stoked by the president and like-minded Republicans.

“People are confused by it. It’s an effort to limit the way we vote, not to expand it,” said Julian Camera of Denver, campaign manager of Campaign for Real Election Protection. “I think what’s behind it is this anti-immigrant narrative to keep certain populations from participating in elections. They aim to slow down the progress we’re making … and even go backward.”

In Florida, the ACLU describes Amendment 1 as “xenophobic and unpatriotic,” according to its published  voting recommendations. “It fails to strengthen our democracy or protect our elections. Instead, it opens the door for additional measures that would subvert and endanger the right of every citizen to vote.” 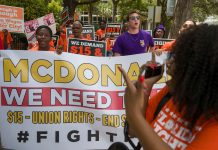 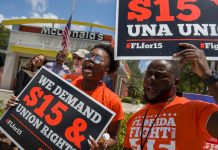 Amendment 1: $8.3 million and two words, for a “citizenship” issue that will likely confuse voters