Vicky Charles has navigated and endured the state’s health care system in Florida, but she still doesn’t have health insurance. And she’s angry.

At one point, the 59-year-old woman in Pinellas County experienced a stroke-like episode in 2018 from not taking her thyroid medication – she’d run out awhile back. Her application for Medicaid, to help pay for treatment, had been rejected.

It’s a tough process, especially in proving a disability or other conditions, she said.

“Medicaid not only refused to give me any and all help, they were very rude,” said Charles, who spoke to the Phoenix by phone.

Charles’ case and others reflect a dire situation, with millions of Floridians without health insurance to fend off illnesses that require regular treatment but can’t afford it.

In fact, Florida is among the worst states in the nation when it comes to people who are uninsured — an estimated 13.2 percent in 2019, according to a recent U.S. Census Bureau report.

Only Texas, Oklahoma and Georgia have rates higher than Florida. The national average for people without health insurance coverage is 9.2 percent.

With the November general election less than a month away, the health care issue has been a major topic in presidential and vice-presidential debates.

Voters in Florida and across the nation must decide on a candidate who they feel can strengthen, expand and protect health care programs such as Medicaid, generally for those with limited income, and Medicare, the national health insurance program for people at least age 65.

William F. Combs, 76, is a military veteran and retired teacher in Leon County who receives health coverage through Medicare and the VA.

“I am just fortunate that I have health care through the VA. I am a cancer survivor, I have a heart condition…and with COVID-19, I am risky so I try to avoid being out in public very long and always wear a mask,” Combs said in an interview with the Phoenix [both the reporter and Combs wore face masks].

Combs is voting for Joe Biden and he’s adamant that the former vice president is the best candidate to address health care concerns and protect health care programs.

“I am a lifelong Democrat and I am certainly voting for Joe Biden. Joe Biden has personal experience with health care crises in his life; he certainly has his ear tuned to the crisis that we have in the U.S. right now because of the pandemic.”

Patrice Rush, 30, a graduate of Florida A&M University, feels that health care isn’t very affordable and she found it extremely important after suffering an injury.

“Getting health insurance was important to me because when I tore my ACL (ligament), I wasn’t able to get the procedure done when it happened. A consultation alone was $350, and the procedure was over $3,000. But once I started working for a law firm that had great health insurance, I only had to pay $30 for ACL reconstruction,” she said in a phone interview.

“Costs for medicine and procedures are rising and people who work a decent job like me, still can’t afford to pay to get the quality of care that we deserve.”

Medicaid expansion in the state has been an ongoing and troubling issue for those without insurance. Expanding the program could help uninsured Floridians needing critical health care to save their lives.

But Florida lawmakers have failed to expand the Medicaid program that provides health services for the most vulnerable population – those living in poverty and disabled residents.

“It’s been multiple [legislative] sessions that the Legislature has not even given a hearing on the bill,” Anne Swerlick, senior policy analyst at the Florida Policy Institute, said in a phone conversation.

“Sadly, I think there is a lot of ideological baggage connected with the issue. There was a study that shows people are prematurely dying because we have not expanded Medicaid.”

As previously reported by the Phoenix, a U.S. Census Bureau report revealed that the number of uninsured residents in Florida climbed from 2.68 million in 2017 to 2.73 million in 2018, or an increase of about 52,000 Floridians.

That report ranked Florida the fourth highest rate in the nation for residents lacking health insurance in 2018.  That ranking remains the same in the 2019 U.S. Census Bureau report.

Across the nation, about two-thirds of states, and Washington, D.C., have expanded Medicaid. But southern states and others have said no to an expansion.

Millions of Americans have lost jobs and their employer sponsored health insurance as a result of the coronavirus crisis, said Sara R. Collins, vice president of the Commonwealth Fund’s Health Care Coverage and Access.

The Commonwealth Fund is a foundation that conducts independent research on health care issues.

“There have been losses but it has hit industries that tend not to provide employer-based health coverage…about 3 million people are probably uninsured as a result of losing their employer coverage,” Collins said, referencing a July report from the Urban Institute, a Washington, D.C.-based research group.

Zenei Cortez, RN, and a president of National Nurses United said in an email to the Phoenix:

“Our health care system is failing the American people…health care should not be tied to employment. Many people are losing health coverage when they need it more than ever during the pandemic.

Priorities USA, a political action committee, released a television ad titled “Mask” against President Trump in September, blasting the president for fighting to eliminate affordable health care protections under the Affordable Care Act at a time when millions of Americans have lost jobs and health insurance during the pandemic.

In early September, the group released results from a poll of voters from battleground states including Florida and found that 49 percent of voters trust Joe Biden to ensure people have access to affordable health care over Trump by a 37-point margin, with 12 percent.

According to a press release, the poll was conducted through a live phone survey in August with voters in Florida, Pennsylvania, Michigan, North Carolina, Arizona and Wisconsin.

President Trump and other Republicans attempt to strike down Obamacare

Meanwhile, President Trump recently left Walter Reed National Military Hospital, where he had been treated for COVID-19, and returned to the White House. Trump announced his diagnosis on Twitter and continued to unveil his plans through the social media platform, tweeting “Will be back on the Campaign Trail soon!!!!”

Democrats in the the U.S. House of Representative have been battling in the U.S. Supreme Court to defend Obamacare, otherwise known as the Affordable Care Act, signed by former President Barack Obama in 2010.

The court case, California v. Texas, involves President Donald Trump and other Republican-led states attempting to dismantle the ACA by challenging the law’s constitutionality, which could result in nearly 2 million Floridians losing their coverage.

“The efforts to sabotage the ACA…that works against people getting coverage,” Swerlick of the Florida Policy Institute said.

More than 1.9 million Florida residents signed up for Obamacare during open enrollment that ended Dec. 17, according to the U.S. Centers for Medicare & Medicaid Services.

And if ACA is eliminated, the number of uninsured people in the United States would increase by 19.9 million, or more than 65 percent, according to a 2019 analysis from the Urban Institute.

Florida Attorney General Ashley Moody joined the lawsuit along with a coalition of other GOP-controlled states. Here is a previous Florida Phoenix report on the issue.

An oral argument could come as soon as October, although a decision by the court may not be made until after the 2020 election, according to a Kaiser Family Foundation report.

“For four years, President Trump has tried to crush the ACA in the courts…the case will be heard one week after the election. Joe Biden will work to lower the cost of health care,” said U.S. Rep. Stephanie Murphy of Florida during a video press conference last week.

“This is critical for Florida, which has the most ACA enrollees. Everything is at stake this election,” the Central Florida Democrat added.

Pre-existing conditions – or not

In late September, President Trump signed an executive order that he said would protect people with pre-existing conditions but many top Democrats such as House Speaker Nancy Pelosi argued that the move was a “farce” while his administration continues attempts to strike down protections under Obamacare.

Trump’s recent nomination of Amy Coney Barrett to the U.S. Supreme Court was backed by U.S. Sen. Rick Scott of Florida but was met with criticism from Democrats who feel the conservative jurist would jeopardize health care and abortion rights.

“This craven court-packing push is fueled by Republicans‘ drive to dismantle health care protections that 135 million people with pre-existing conditions, including me, rely upon, as well as to subvert reproductive rights.

While President Trump, members of Congress, employees at businesses and other people who have health insurance, Vicky Charles is still struggling to get similar insurance.

Tomica Smith, board of directors secretary at Florida Voices for Health, a nonprofit coalition advocating for a better health care system in Florida, connected the Florida Phoenix with Charles, who talked about her efforts to get health care to the Phoenix.

The stroke-like incident in 2018 was when Charles was rushed to the emergency room after falling on the living room floor and couldn’t move her legs.

“I woke up and I was paralyzed from the waist down and when I got to the hospital my body stopped processing food,” she said.

“I went into a nursing home and I was there for three months, literally learning how to walk again,” she added, thanking the Florida Department of Health in Pinellas County for its rehabilitation program.

She applied for Medicaid in 2018 but received a rejection letter, saying she didn’t meet the eligibility criteria to receive health benefits.

“DCF [Florida Department of Children and Families] approved the food stamps…I called them up and explained to them all the doctors in 2018 and let them know I cannot work and can barely, walk, talk, or type.

But the letter she got said: ‘You are not disabled.’

Homestead and veterans Amendments on smooth road toward approval 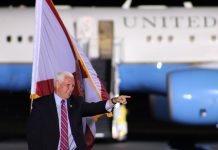 Living without health insurance: FL voters to decide on which candidates can provide affordable health care