Seventeen years ago, when I was a reporter for what was then known as the St. Petersburg Times, I drove across the Sunshine Skyway Bridge to tour a 700-acre industrial site near Port Manatee.

My destination was an old fertilizer plant that the state’s top environmental regulator, during our tour, called “one of the biggest environmental threats in Florida history.”

The name of the plant was Piney Point. The peril came from the hundreds of millions of gallons of acidic wastewater held in large ponds atop two gypsum stacks that loomed near the edge of Tampa Bay.

Piney Point’s owner, Mulberry Corp., had declared bankruptcy and abandoned the plant. Now, because of heavy rainfall, everyone feared the rising amount of wastewater would break through its containing wall and pour down into the bay, killing millions of fish.

The state Department of Environmental Protection came up with a desperate plan: Treat the waste, load it on a barge and spray it into the Gulf of Mexico, counting on dilution to be the solution to the pollution.

It worked. Everyone thought that was that. Everyone was wrong.

Piney Point was back in the news last week, giving me a serious case of déjà vu. “Contaminated water at the former Piney Point phosphate plant is nearing the site’s capacity, putting all of Tampa Bay at risk for an environmental crisis,” radio station WMNF-FM reported.

How did Piney Point get to be a threat all over again? Because it was handled the same way we always handle environmental problems in Florida — by putting off dealing with difficult situations until they escalate to the point that we can no longer ignore them.

The plant, built in 1966, seemed like it was in an ideal location. It sat across U.S. 41 from the port, with easy access to the CSX rail line. But just a mile away lies Bishop Harbor, a sensitive aquatic preserve that connects to Tampa Bay, which happens to be Florida’s largest estuary.

Within a year the original Piney Point owner, a subsidiary of milk giant Borden, was caught dumping its waste into Bishop Harbor. More dumping occurred in 1970, creating a series of fish kills.

The plant repeatedly changed hands, and repeatedly fouled the environment, even releasing toxic fumes that sickened workers, killed cattle, and drove neighbors from their houses. After all that, you would think outraged people would have swarmed over the fence and burned it to the ground, but they did not. They waited for government to do its job.

That turned out to be a mistake, as state regulators repeatedly bent or ignored their own rules to give Piney Point’s owners time to clean up their mistakes. The owners never did, then walked away, leaving the DEP — and the taxpayers — on the hook.

Then came a really rainy year when the wastewater ponds filled up like a caffeine addict’s first cup of joe in the morning — nearly to the rim. That was when I got my tour, and when the DEP opted to keep the pollution out of the bay by putting it into the gulf. The thinking went that a deeper body of water could handle that amount of pollution more easily by diluting it.

The state managed the site, but even that was no guarantee the wastewater at Piney Point would stop being a threat. In 2004, hurricane winds knocked a hole in a dike, dumping 70 million gallons of contaminated water into creeks that flowed into Bishop Harbor.

The DEP allowed Piney Point’s bankruptcy trustee to sell it for $4.3 million in 2006 to HRK Holdings LLC. It did so over the objections of local environmental activists.

“We questioned whether a private company could better manage the water atop those gypsum stacks,” said Glenn Compton, president of the small but feisty environmental group ManaSota-88. “It appears the answer is no.”

HRK’s plan was to turn the land into a storage terminal for companies using the port. The company has sold off a couple of small parcels of the property. In 2011, a DEP official told the Sarasota Herald-Tribune that the site was now a “success story.”

That was the same year the liner beneath one of the Piney Point stacks tore, spilling 170 million gallons of contaminated water into Bishop Harbor.

Since then HRK has been in and out of bankruptcy, according to Compton. Meanwhile, you may have noticed we’ve had so much rainfall this year that Noah might find it a tad excessive, which has filled the ponds up again.

I contacted HRK Holdings with questions about this and general manager Jeff Barath — a former DEP employee — emailed me some answers. He said the company has been getting rid of about 55 million gallons of wastewater a year through spray evaporators. But the rainfall has exceeded their ability to get rid of the water and now “we have remaining storage for about 19 inches of rainfall or 60-million gallons of water.”

DEP press secretary Weesam Khoury assured me that, from the agency’s perspective, “there is no imminent threat and the site continues to have the ability to temporarily and safely manage additional rainfall.”

But when Barath talked to the Manatee County Commission last week, he told them flat out, “We are quickly running out of process water capacity.”

The result, said Compton, is that “the taxpayers will have to do something about Piney Point in the near future.”

Manatee County, which has borne the burden of this environmental threat for years without getting much benefit out of it, may be forced to treat some of the wastewater at its sewage treatment plant, he said.

Another possibility is treating the wastewater and then injecting it deep into the aquifer, which Compton said environmental groups are sure to oppose as a danger to the state’s drinking water supply.

“If they do it at Piney Point, that will set a precedent for it to be done all over the state,” he said.

A mountain of hazards

See, that’s the really scary thing about Piney Point — it’s not alone. There are about 25 gypsum stacks at phosphate processing sites all over Central and North Florida, some looming as high as 200 feet, each one with its own pond of acidic wastewater on top. They look like mountains but actually they are all huge environmental hazards.

“All these stacks are vulnerable to losing capacity,” warned Rachael Curran, a senior attorney with the Center for Biological Diversity. No one in the phosphate industry is prepared to cope with the increased rainfall that’s been predicted to accompany climate change, she said, “yet the state continues to allow these stacks to grow.”

Bishop Harbor and Tampa Bay aren’t the only places at risk from this stuff. In 1997, amid a heavy rainstorm, a dam broke atop one of two gypsum stacks at a phosphate plant near Mulberry, unleashing a 56 million-gallon spill of acidic wastewater into the Alafia River.

The pollution killed everything in its path for 42 miles. The death toll included more than 1 million baitfish and shellfish, 72,900 gamefish near the river’s mouth, and an unknown number of alligators.

The lesson from all these repeated Piney Point disasters, according to Dennis Mader of the anti-mining People for Protecting Peace River, is pretty simple: “Until they get this figured out, the DEP should not be permitting any more mines.”

I called up the Florida Phosphate Council to ask if the industry is working on any new ways to handle all those pools of acidic pollution other than letting them sit and collect rain. The answer I got from Mike Williams, a government and industrial affairs manager for a company called Nutriens, is no, but he blamed the EPA and DEP.

“The regulating community says this is the way you’ll store it so that’s the way we store it,” he explained. Still, he said, “we’re always looking for innovation and better ways to do things.”

I am sure the phosphate industry will be glad to hear that I have an innovative solution to the pollution, and it doesn’t count on dilution — or injection either.

Soft drinks like Coca-Cola and Pepsi are pretty acidic, too (if you don’t believe me, just ask your dentist). So instead of trying to dump all those millions of gallons of acidic water, why don’t we bottle it and sell it?

We could call it “Piney Point Cola,” which certainly sounds bubbly and refreshing. I bet it would be just as safe to drink as water from an aquifer where that waste has been injected. (And under this current presidential administration, would the EPA or the Food & Drug Administration really object? I doubt it.)

To help promote it, we could put Piney Point Cola vending machines in every single state agency building, including the Governor’s Mansion and the House and Senate offices. In fact, we could make it the exclusive franchisee for those buildings — at least until the state figures out a way to make it all go away safely, without sticking the taxpayers with the bill (again). 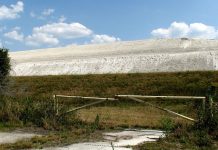 Phosphate waste threatens bay again, so what if we bottled it?