Twenty years ago Black voters in Tallahassee complained when law enforcement officials set up road blocks between minority neighborhoods and the precincts where they vote — on Election Day.

You can imagine the uproar it caused.

Now President Donald J. Trump is threatening to send all sorts of law enforcement officials into voting precincts all across the nation: sheriffs and their deputies, the FBI, federal prosecutors, attorneys general – all the power he can amass to monitor voting.

I’m sure that will make our voters feel extra safe.  Not.

It’s yet another attempt to cut down the number of people who cast their ballots. Scare enough people, especially people of color, and he might be able to defeat Democrat Joe Biden and U.S. Senator Kamala Harris.

It is discouraging to see modern day public officials doing all they can to suppress votes.

First, Trump tried to block voting by mail, but that seems to be failing spectacularly except for a courtroom challenge that may keep as many as a million Florida felons from voting again. Florida Gov. Ron DeSantis is helping his “Commander in chief’’ with that.  It remains in court.

Now they want to see how many people they can intimidate.

Years ago it was pretty common to station uniformed officers with guns in their holsters at voting precincts in a bid to keep some people from voting.

In New Jersey, a Republican Party program sent off duty officers into Black and Latino neighborhoods just for the purpose of intimidating prospective voters.  That ended with a federal agreement limiting the ability of the national party to use law enforcement to scare some voters.

They are allowed at the polls, but can only take action at the direction of precinct officials.  And they don’t typically have access to the place where voters are casting ballots.

Each deputy can summon assistance from bystanders when necessary to maintain peace and order. This law was affirmed by the Florida Supreme Court in a 1932 case and again in a 1994 opinion by Attorney General Bob Butterworth.

The original case arose in mob-swamped Tampa in the midst of the Great Depression.

Florida’s land boom was crashing, Prohibition was in full flower and illegal gambling was available all over the area.  Sheriffs were suspended and reinstated and new ones were appointed as several different governors struggled to control the mob-related problems in Tampa.

Governor Doyle Carlton, a former Tampa resident elected to the statewide office in 1928,  appointed a new sheriff in Hillsborough County in 1929 in an attempt to clean up gambling, illegal alcohol and mob problems, but his appointee, Sheriff R.T. Joughin, could not win reelection after mobsters raided a voting precinct, blackjacked a police officer and tried to steal the ballots.

Gambling was everywhere in Tampa. Bolita bets were common and newspaper headlines were filled with tales of gambling and liquor.  It took years before the mess was cleaned up.

It is unclear exactly what measures Trump plans to take, but he has repeatedly indicated he wants law enforcement agents inside voting precincts all across the nation to prevent election fraud.

He has also threatened to withhold funding for the U.S. Postal Service, to block the use of voting by mail.

In Florida, no law enforcement officer is authorized to interfere in an election or even be inside the polling place unless election officials allow it. But the law does require sheriffs to appoint a deputy to be present at every voting precinct on Election Day.

Civil rights activists have long opposed adding uniformed officers to those allowed at voting precincts, saying it would inhibit participation by people of color. The U.S. Voting Rights Act passed in 1965, gave minorities the right to vote without being forced to pay poll taxes, take literacy tests or face other restrictions.  All were common practices in many Southern states at the time.

Perhaps the President should read the law.  He wants to load up the precincts with all kinds of law enforcement officers.

Such intimidation would not likely stand a court test in Florida — or anywhere else in this country. 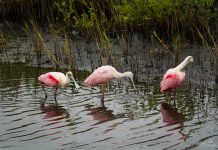 Scare enough people, especially people of color, and Trump might be able to defeat Biden and Harris

FL’s dumping ground for COVID-19: Just come on down and see...