Some Florida districts opened their school doors less than a week ago, and already, they’re reporting COVID-19 cases on their campuses — having to quarantine teachers and students.

At least four districts of 67 districts in Florida have reported COVID-19 cases. They are Bradford, Manatee, Seminole and Suwannee, according to Phoenix interviews, news reports and the Florida Education Association.

COVID-19 infections have been rising, particularly in North Florida — including in Suwannee County, according to a New York Times analysis of infection rates by counties in Florida.

David Harris, assistant superintendent for Bradford County, in North Florida, told the Phoenix that the district has had fewer than 10 students confirmed to have tested positive for COVID-19, but were sending other students home as a precaution. Bradford County opened their schools Monday.

“Thus far, we do not have any knowledge that any student who has contracted COVID-19 while at school, he said. “We do, however, have knowledge that other students have had COVID-19 and come to school with it, and then began displaying symptoms, and then were tested and determined to be positive. We also have some students that have never returned to school due to the fact that they have COVID-19.”

Harris said that the school district consults with public health officials to determine which students need to be quarantined through contact tracing — an effort to notify those who have been in close contact to infected people.

The Phoenix asked about the age range of students who have contracted the disease. “We’ve only been in school one week,” Harris said, “so the numbers are just starting to come in, as far as cases and quarantine.”

The question is pertinent because children between 5 and 17 have lower rates of hospitalizations and deaths compared to older people, according to the Centers for Disease Control and Prevention (CDC).

Sunday, the TC Palm reported that 121 students and several teachers from Martin County had been forced to quarantine since schools reopened last Tuesday.

In a press release on Sunday, the Florida Education Association says that “Martin County is becoming the epicenter of school openings gone wrong and the prime example of why ignoring health and science guidance will be disastrous for school reopening.”

“When schools in the Martin County School District opened their doors to students this past Tuesday, the district was by far the largest in the state to open its campuses,” the press release says. “After four days back, the results are predictable: 12 staff (including two bus drivers) and an estimated 121 students at three elementary schools, a high school and two bus routes were directly exposed to individuals with a COVID-19 diagnosis or symptoms.”

The press release reports that Bradford quarantined students and staff from three schools; Suwannee reported three teachers and a student testing positive; Manatee reported at least nine schools where staff had been exposed, with students returning Monday, and Seminole, where an entire grade level at an elementary school had been quarantined.

More districts started their first day of school this Monday, August 17, and others will follow over the next two weeks.

Meanwhile, a lawsuit filed by the FEA continues on the reopening of brick and mortar schools.

The lawsuit relates to a state emergency order from early July, and sent to administrators, saying that all school districts “must open brick and mortar schools at least five days per week.”

The FEA and several teachers and parents from across the state are suing DeSantis, Education Commissioner Richard Corcoran and other state officials, saying that the mandate does not offer safe and secure schools for Florida students, thus violating the Florida Constitution.

On Tuesday, the two sides will start off with mediation — an opportunity for the plaintiffs and the defendants to come together in hopes of coming to an agreement that addresses some or all of the concerns in the lawsuit. Both sides will confer through mediators, who are neutral and impartial guides.

If state officials and the FEA don’t come to an agreement, hearings will continue on Wednesday and Thursday to rule on a motion for a temporary injunction.

That injunction would compel state officials to implement relief, such as closing unsafe schools, providing substantial personal protective equipment to all schools before they can reopen, and developing online learning instructions with access to internet connectivity and computer devices. 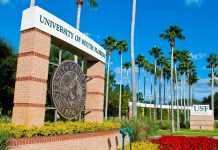 After one week of schools opening, COVID-19 has begun seeping into school buildings

Biden’s Secretary of Education has yet to be announced. Who is...

Kids will have a long summer: Districts across FL are delaying...