As COVID-19 spreads through Florida’s state prisons, a group of lawmakers who have visited the prisons said it is increasingly urgent that state leaders release non-violent inmates at elevated risk of being sickened or dying from COVID-19.

“Dying of coronavirus is not an appropriate sentence for selling marijuana,” said Rep. Susan Valdés, a Tampa Democrat. “I believe Floridians are better than this.”

Through Thursday morning, COVID-19 had killed 75 inmates in Florida’s state-run and private prisons and two prison employees, according to the Florida Department of Corrections. More than 14,000 inmates have been diagnosed with the disease.

The Department of Corrections says many of them had mild symptoms or none when they were tested, without specifying how many.

The Department of Corrections announced on July 30 that Secretary Mark Inch and Deputy Secretary Ricky Dixon also were diagnosed with the disease.

Sen. Bobby Powell, a Palm Beach County Democrat and chair of the Senate Black Caucus, said he and other lawmakers have been calling on Gov. Ron DeSantis and Corrections Secretary Mark Inch to grant compassionate release and furloughs to qualified inmates, especially those near the end of their sentences already, as is being done elsewhere in the country.

“We are again calling on the governor and the secretary of the Department of Corrections … to be compassionate,” Powell said.

The Florida Phoenix requested comment on whether DeSantis will consider or pursue the release of certain qualified inmates, but the governor’s office has not yet responded.

Rep. Dianne Hart, a Tampa Democrat, wrote to DeSantis in April urging him to use his executive powers to release inmates who pose the least risk to society but are at most risk of contracting the deadly disease behind bars.

Since then, the number of inmates in medical quarantine or isolation (exhibiting symptoms or having been directly exposed to an infected person) has surged to more than 20,500, roughly a quarter of the prison population, according to prison-system reports through Thursday.

“Not one was [granted] compassionate release,” Hart said.

Joining Hart and Powell in the videoconference Thursday were Democratic Reps. Kimberly Daniels of Jacksonville, Susan Valdes of Tampa, and Wengay “Newt” Newton, who represents parts of Hillsborough, Manatee, Pinellas, and Sarasota counties.

Also Thursday, Florida Cares, an inmate advocacy organization, sent the governor a third letter petitioning for release of select inmates in light of pandemic conditions and the near impossibility of achieving safe distancing in the close quarters of prisons.

“So far, you [Gov. DeSantis] have rejected calls to release vulnerable and low-risk prisoners, an effective strategy the federal government and other states have used to reduce the burdens the virus creates on their prisons. As a result of this egregious misstep, thousands of incarcerated people, and hundreds of corrections professionals have been infected with COVID-19 unnecessarily,” wrote Denise Rock, executive director of Florida Cares Charity Corp.

Meanwhile, the U.S. Bureau of Prisons, several state prison systems around the country, and hundreds of county jails have released thousands of low-security inmates, according to the Prison Policy Initiative.

The bureau reports it has released 7,444 low-security inmates to home confinement since March 26.  Inmate advocates including the American Civil Liberties Union say thousands more qualify for release under federal authority granted by U.S. Attorney General William Barr and by the federal CARES Act but remain behind in prison. Lawsuits seeking additional inmate releases to home confinement are pending across the country.

The Florida Phoenix has written extensively about secrecy in prison culture and conditions in federal prisons, based on interviews and hundreds of pages of records filed in lawsuits on behalf of inmates, and about federal prisoners who have been released, with help from inmate advocacy groups. 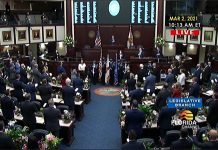 As economies reopen amid COVID-19, many employees fear returning to work....