Workers in Miami protested Friday against losing federal Unemployment Insurance benefits of $600 weekly that jobless people were receiving in the pandemic economy due to massive job losses.

The four-month-old supplement ended Friday, with partisan fighting in Congress failing to create a replacement. The U.S. Department of Labor reports nearly 32 million Americans are out of work.

The loss of the $600 weekly supplement leaves Florida workers made jobless by the pandemic reliant on a $275 weekly state benefit that includes only 12 weeks of unemployment pay — the lowest total benefit in the nation, according to the U.S. Department of Labor. (The base number of weeks does not reflect the 13-week extension authorized nationwide by Congress for COVID-19 relief.)

“We are feeling the pain of the pandemic through no fault of our own. There are no jobs for people to find,” said Jeffrey Mitchell, president of the South Florida AFL-CIO and of Transit Workers Union Local 291, who was interviewed by the Phoenix.

“Nobody is sitting at home thinking that $600 a week would get them to the promised land.”

Mitchell said jobless workers are facing financial disaster while worried about workplace safety in the middle of a pandemic that has killed 154,000 people in the United States and nearly 7,000 in Florida. Miami-Dade transit workers transport roughly 2 million people a day, and 154 of those workers are out sick with COVID, Mitchell said.

“We buried one of our people last week, and we’re burying another one tomorrow,” Mitchell said, referring to Miami-Dade transit workers who he says died of COVID-19.

Florida workers in other sectors also dread losing unemployment benefits while being unable to find jobs or fearing infection as they re-enter workplaces.

The Trump Administration’s Department of Labor refused to set workplace safety standards through its Occupational Health and Safety Administration, or OSHA, to protect workers from coronavirus, despite the AFL-CIO suing it to do so. That leaves workplaces unregulated and safety measures voluntary.

A rally and caravan Friday was organized by the South Florida AFL-CIO and was attended by state and local elected officials who demanded support for workers from Florida’s three most prominent Republicans — U.S. senators Rick Scott and Marco Rubio and President Donald Trump.

Senate Republicans proposed this week that the $600 weekly benefit be cut to $200; House Democrats want to extend the $600 supplement until 2021, when more jobs are available and the workplace dangers of COVID-19 may be mitigated by advancements in treatments or infection control.

The Phoenix requested comments from senators Rubio and Scott but did not get a reply.

A recorded greeting on Scott’s Washington, D.C., phone says all employees in his office there and in his offices in Florida are teleworking because of COVID-19.

The reprieve is over: FL students will have to take state exams in 2020-21, even in a pandemic 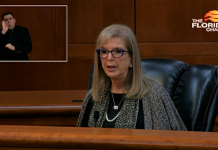 Panhandle mother, in event with Gov. DeSantis, describes how ‘convalescent plasma’ saved her from COVID

As virus spreads into prisons, lawmakers call on Gov. DeSantis to...