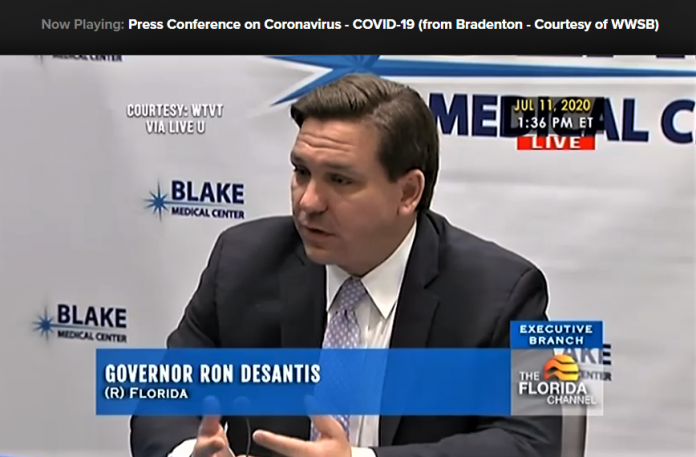 Gov. Ron DeSantis expressed confidence Saturday in the state’s response to a resurgence in COVID-19 infections, saying Florida is succeeding in protecting its most vulnerable residents while monitoring rising infections among young, working-age people who are less sick and less likely to die.

Speaking at a press conference at Blake Medical Center in Bradenton, DeSantis cited a slight week-over-week decline in coronavirus tests with positive results.

The difference in the positivity rate for the week ending July 4 and the week that ended Friday was less than half a percent, declining from 14.8 percent to 14.5.

Meanwhile, Florida reached a new mark on Saturday, with more than 250,000 infections — specifically 254,511 COVID-19 cases, according to the Florida Department of Health. The figure came from 10,360 new cases reported overnight. The statewide death toll as of Saturday was 4,197 residents.

She called the governor’s phased reopening of Florida plans a failure, despite efforts to loosen restrictions on residents and boost the economy.

“The virus is winning this war in Florida, not the governor,” Gibson stated.

“There is no effective plan in place to halt the spread, like other states have effectively deployed. Governor DeSantis refuses to consider the recommendations we made based on those successes: mandatory face coverings, instituting safety regulations in the workplace, paying the newly filed and outstanding unemployment claims while the economy struggles to recover, and bringing down the numbers [of new infections] for 14 consecutive days – as the CDC has recommended – before attempting to move to any phase of reopening.”

But DeSantis maintained a positive attitude, saying, “I want as many people in business as can, with low risk,” the governor said. “We want to get this positivity rate down. We want to see COVID visits down at EDs [emergency departments].”

As successes, DeSantis pointed to the acquisition of new shipments of Remdesivir, an antiviral drug that may shorten the duration of COVID symptoms; the opening of three federal sites for antibody testing; an adequate supply chain for personal protective equipment; and establishment of 13 skilled nursing facilities where sick nursing home residents stabilized and discharged from hospitals can continue to be treated in isolation.

Officials with Blake Medical Center and HCA Health Care of West Florida praised the governor for his responses but also noted that the health-care workforce is strained by the resurgence, and that supplies of chemical re-agents used in labs to test for COVID are in short supply, slowing the pace at which test results can be known.

As they departed, the governor, who has declined to issue a statewide face-mask mandate, and his entourage donned face masks.

Blake Medical’s Emergency Medicine Director Scott Selph wore a mask throughout the press conference and while speaking into a microphone. He was seated in front of a sign instructing that masks be worn at all times. Universal masking is required of staff and visitors in the hospital.

As economies reopen amid COVID-19, many employees fear returning to work....