Note: This story has been updated to add details, comments from the governor’s press office, and reaction.

Gov. Ron DeSantis announced Monday that he’s used his line-item veto authority to carve out more than $1.3 billion from the $93.2 billion state budget the Legislature approved in March to account for state revenues lost to the COVID-19 pandemic.

Fully half — $500 million — will come out of the governor’s own priorities, including a job growth grant program, the governor said during a news conference in the state Capitol.

Even so, the budget, which goes into effect with the new fiscal year on Wednesday, retains $600 million in increased teacher pay, additional money for public schools and universities, water programs and Everglades restoration, and public safety, DeSantis said.

The teacher pay increases will go toward higher starting salaries for Florida’s public school teachers as well as raises for experienced educators.

When he and the Legislature began work on the budget, “we could see an economic downturn, but I don’t think we necessarily forecast the economy simply stopping for a time,” he said.

“As the reality changes, I think we all have to recognize that none of us are going to get everything we want. And so, I thought it was important that I was stepping up to the plate on that as well.”

Under the new budget, which the governor said he’s signed before addressing reporters, state agencies will roll over $800 million as yet unspent during the current fiscal year. That, plus unspent trust fund and general revenue money, will leave the state with $6.3 million in reserves to absorb continued revenue lost to the pandemic.

Given the state’s population growth, the new budget represents a decline in spending per Floridian, DeSantis said.

The governor had warned on June 16 that his application of his line-item veto power would be bloody.

“It’ll be a lot of red. It’s kind of the veto equivalent of the red wedding from Game of Thrones,” DeSantis said.

According to a report last week by Florida Office of Economic and Demographic Research, which monitors budgetary trends, state tax collections were down by nearly $1.5 billion through the end of May.

The budget, approved by the Legislature on March 19, before the seriousness of the COVID crisis was fully understood, contained what then was considered an unusually large reserve of $3.8 billion.

As for those teacher pay raises, its not clear when the money would make it into actual paychecks and how big any raises in particular counties would be. The education budget does boost per student spending by $137, the highest on record, for a total of nearly $7,800, DeSantis said.

The final budget does not include any public college or university tuition increases.

It does contain $625 million for Everglades Restoration and water-resources protection plus $100 million for the Forever Florida environmental land-purchase program.

Additionally, there’s $9.2 billion for transportation infrastructure, including highways, bridges, airports, and rail; $1.3 billion in state and federal money for disaster preparation and mitigation; $10 million for election protection including cybersecurity precautions; $6 million for the prisons, including pay raises and to begin moving corrections offices from a 12-hour to an 8-hour shift; and $145 million for affordable housing.

But dozens of projects sought by House members and senators for their home districts have died, the governor said.

“You’re looking at hundreds of millions of dollars from some of the bigger ticket items, and then a lot of the smaller projects,” DeSantis

“Nobody has ever made more vetoes than I did right here. I don’t think they’ve ever vetoed $1 billion,” DeSantis said.

That said, “I convinced that we’ll be able to weather the storm and do it right,” he said.

The final environmental budget won praise from Eric Eikenberg, CEO of The Everglades Foundation. “This critical water infrastructure funding will advance restoration of our Everglades, create much-needed jobs, boost our state’s tourism-based economy and yield tangible health benefits for Floridians,” he said in a written statement.

“As our economy recovers from the effects of a global pandemic, the last thing we need is another toxic blue-green algae and red tide crisis, both of which have negative impacts on human health and cause respiratory issues. This funding has always been important, but it is more important now as we deal with the Coronavirus and its devastating health and economic impacts.”

“From day one of the crisis, DeSantis has ignored public health experts and followed the lead of Donald Trump. The result has been a botched reopening and a recession in Florida,” she said in her own written statement.

“Today, we are seeing the results of DeSantis’ failures to lead. Without consulting the legislature or any elected Democratic leaders, Ron DeSantis made massive budget cuts that will impact the lives of all Floridians. DeSantis must own the consequences of these cuts, which will inevitably hurt our schools, our children, and our families.”

Dominic Calabro, head of the fiscal watchdog Florida TaxWatch, noted that 146 of the 180 projects and budget items identified his organization had identified as “budget turkeys,” or of questionable procedural justification, had been culled. The governor vetoed 518 member projects worth $264 million, he said.

“More than four months into this pandemic, the situation is still evolving, presenting new challenges on an almost daily basis. Despite these significant challenges, this balanced budget is a work product the people of Florida can be proud of. Key priorities are funded, and our state remains on solid financial footing heading into the new fiscal year.”

Chris Sprowles, the Pinellas County Republican slated to become speaker presuming his party retains control of the House this fall, had this to say on Twitter:

“@GovRonDeSantis played his constitutional role and did what was necessary to stabilize Florida’s budget. Everyone will be disappointed by something, but as we approach July 4th, let us remember that shared sacrifice in the face of an ongoing crisis is a heroic American value.”

Orlando House Democrat Anna Eskamani’s praised the governor for retaining pay raises for teachers and state workers, and for the environmental money.

“Unfortunately we could have avoided the major line-item vetoes if we did not move forward with a tax refund of $543 million to the state’s largest corporations in April,” she added.

“Hard-working Floridians will always lose if we continue to allow corporations to set the funding and policy agenda. Yes — more people are suffering because of COVID19, but the economic disparities many are feeling today have been the norm for far too many families for far too long. We will not stop fighting to build a better Florida for all.” 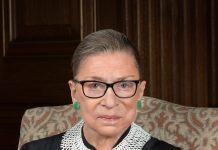 Gov. DeSantis tries to rally Floridians behind his plans to reopen...