Is there any sound more annoying than the high-pitched whine of a mosquito in your ear? The only comfort is knowing that the whining ones are males that don’t bite. The females, the only ones that suck your blood, are silent.

I became a huge fan of dragonflies after my grandmother — who called them “skeeter hawks” — said they regularly ate their weight in mosquitoes (she might have slightly exaggerated their consumption).

And I cheered whenever the county’s Mosquito Control truck rolled down our red clay road, belching out thick clouds of insecticide. Usually there would be a couple of kids bicycling along behind, taking in big lungfuls of the stuff.  I suspect those kids grew up to become state legislators.

Dragonflies and insecticide exemplify the two approaches to dealing with our constant mosquito problem here in Florida. On the one hand, there’s the natural method, and on the other, the artificial one.

Last month, in a historic first, the U.S. Environmental Protection Agency approved a permit for a company called Oxitec to employ the most artificial method of all to squelch skeeters in the Florida Keys.

The EPA permit allows Oxitec to release male mosquitoes that have been genetically modified to breed with wild females and produce female offspring that will die before they can bite anyone.

The company’s goal here is to eradicate a type of mosquito called Aedes aegypti which is not native to Florida and which can spread such diseases as Zika and dengue fever. And Oxitec wants to start turning their product loose in the wild sometime this summer.

The EPA refers to Oxitec’s product as a “biopesticide” which, unlike regular pesticides, will “not pose a risk to people” and have “no adverse effects to animals such as bats and fish.”

Oxitec calls it — I am not making this up — their “2nd Generation Friendly™ mosquito” which they have code-named “OX5034.”

Some people in the Keys refer to it as “Frankenskeeter,” a sign of how much they fear and despise the things. Jurassic Park comes up a lot, too.

“It sounded really great at first,” said Megan Hull, a social services employee from Sugarloaf Key who has been fighting Oxitec’s plans since 2011.

She said when the company was either unable or unwilling to answer her questions (she did have a lot of them), that led her to object to her community being used as a testing ground for genetic experimentation.

Oxitec has been trying for more than decade to set up a trial run in the Keys and thus get a toehold in the U.S. market. The company was launched at Oxford University in England — hence its name.

Now it’s part of a conglomerate owned by a billionaire named Randal J. Kirk, who lives just up the road a ways in the Palm Beach County oceanside community of Manalapan.

Originally Oxitec planned to release its first-generation experimental bug in 2016 in a small Monroe County community called Key Haven. Key Haven residents were not thrilled to be singled out as the first place in America to get “Friendly™” mosquitoes.

After an uproar, the county agency in charge of mosquito control agreed to hold a non-binding referendum vote in Key Haven. Then, at the last minute, the agency added another referendum for all of Monroe County.

In Key Haven, 65 percent of the voters said no to Oxitec, but the vote from Monroe County went the other way, with 58 percent saying yes.

Hull told me she and the other opponents had concentrated all their campaign efforts in Key Haven and thus the rest of Monroe County hadn’t heard much from them prior to the vote.

When I talked to Oxitec’s head of field operations, Kevin Gorman, he said the company will “likely not choose Key Haven” as Ground Zero for their 2020 test.

When I asked where they would go instead, he would not give a specific location but said the company would work with the local government to pick precincts in Monroe County that voted in favor of releasing the altered Aedes aegypti.

The EPA has been Oxitec’s biggest hurdle. Its experimental permit has already been okayed by a state agency, the Florida Department of Agriculture and Consumer Services. That means the only government entity left to say yes is the Florida Keys Mosquito Control District, the agency that sponsored the referendum four years ago.

The mosquito control board held a public workshop on Tuesday. About 70 people listened in as Oxitec officials talked about their proposal and touted its easy deployment in pills that produce the mosquitoes by just adding water.

The county health director endorsed Oxitec’s plans, comparing any risk from the experimental bugs to the potential risks of taking a newly developed vaccine for coronavirus.

But one of the board members, a pediatrician, as well as several members of the public, questioned whether the risks of the experiment going awry would outweigh any potential benefits.

Zika was a big concern four years ago but now seems to have vanished, and no more than a handful of dengue fever cases have popped up in South Florida in recent years.

The control board’s current program — a combination of spraying and eliminating standing water where the critters can breed — has been enough to keep diseases at bay, they said. Some called for a new referendum but the chairman said that it would be pointless to do a second one.

One thing that makes the Oxitec pilot project appealing to local officials is that the company is paying for it, not the taxpayers — at least, for now.

When I asked how much all this was costing Oxitec, Gorman told me he couldn’t say.

Four years ago, though, Technology Review reported that a Brazilian pilot project by Oxitec would cost more than other alternatives under consideration because “for it to work, huge numbers of mosquitoes — greatly outnumbering the wild population — have to be released continually … . Oxitec says that to protect about 5,600 people who live in the test area, it has been releasing between three and four million mosquitoes a month.”

I started thinking about all those millions of male mosquitoes zooming around the Keys, whining in people’s ears, when a new question occurred to me.

If Oxitec’s “Friendly™” insects are so beneficial to humanity and so devoid of risk, why release them in the sparsely settled Keys?

Why not, instead, turn them loose in a more populated area where they could really do some good?

Why not unleash these flying hordes just up the road, in a place like Palm Beach County — perhaps in the spacious backyard of one Randal J. Kirk? 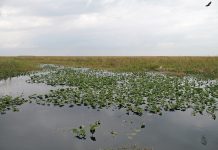 A testing ground for genetically modified ‘friendly’ mosquitoes in the Florida Keys?

Greyhound shutdown shows how FL politics has gone to the dogs