Gov. Ron DeSantis is going back to court in yet another attempt to keep hundreds of thousands of Floridians from voting.

In a request for expedited review, attorneys for DeSantis chose to file their initial brief with the U.S. Court of Appeals for the Eleventh Circuit by June 19. They want that court to overturn a ruling by a federal judge who sided with 17 returning citizens who sued the state for denying them their voting rights based on wealth.

Here is the significance of that date: A disproportionate number of the people whose voting rights are being suppressed in Florida are Black.  June 19 – also known as Juneteenth — is the anniversary of the day when the last enslaved people in the U.S. were freed in 1865.

The state should be honoring Juneteenth by registering and removing barriers to the right to vote to ensure the full guarantees of citizenship and voting for Black Floridians instead of devoting taxpayers’ resources to strip voting rights.

Here, in brief, is that grisly history:

In 1871, six years after the last enslaved people were freed in Texas, Black men were given the right to vote. Six years later, in 1877, Florida adopted a poll tax that was used to strip the right to vote from most Black people in the state. Then came the adoption of literacy tests, which were designed with the sole purpose of keeping Black people and other people of color from voting.

These tactics were used in conjunction with Black Codes, which led to thousands of Black people being arrested on bogus criminal charges and losing their right to vote. What’s worse, even after an individual completed their sentence, the State’s onerous, arbitrary clemency laws adopted in its 1868 constitution made it nearly impossible to regain your rights as a citizen.

The system of felony disenfranchisement — adopted at the beginning of Jim Crow and a period of state-sponsored white supremacist racial terrorism — survived essentially unchanged from Reconstruction until 2018.

According to the Washington, D.C.-based Sentencing Project, one of every 13 African-Americans in the United States have lost their voting rights due to felony disenfranchisement laws.

In November of 2018, 65 percent of Floridians voted for Amendment 4, and rejected that legacy of the Confederacy. Through this amendment, Florida voters returned the ability to vote to returning citizens who had completed their sentence including parole and probation, except for those convicted of murder or felony sexual offenses.

Certain Florida politicians and DeSantis responded by passing Senate Bill 7066, which eliminated the right to vote for returning citizens who were given this fundamental right back under Amendment 4 by making voting contingent on an individual’s wealth.

DeSantis reached back to the 1870’s, to the Jim Crow era, to institute a poll tax to eliminate voting rights. In our studies, we found that 77 percent of Floridians otherwise qualified to vote under Amendment 4 still owed LFOs (legal financial obligations), and those individuals were disproportionately Black.

On May 24, a federal judge found that this law was nothing more than a pay-to-vote scheme that fundamentally violates the U.S. Constitution.

Now, DeSantis is appealing the ruling to the Eleventh Circuit Court. Is it a coincidence that they chose to file it by Juneteenth?

The significance of that date isn’t lost on Black leaders around Florida and across our Country.

“Juneteenth celebrates the end of slavery in the United States,” says Marsha Ellison, president, NAACP Fort Lauderdale/Broward Branch, and civic engagement chair, NAACP Florida State Conference, the latter of which is an organizational plaintiff in the lawsuit against SB 7066.

“Choosing Juneteenth as the date to file its initial brief in the SB 7066 case is another example of overt racism bellowing from the governor’s office,” she said. “Gov. DeSantis must come to the realization that Black Lives Matter!”

As people all across our country protest the state-sponsored terror inflicted on Black people by the police right now, we also fully understand how important it is to fight for and exercise our fundamental right to vote.

Yet the disease of systemic racism that permeates every institution in our country continues, and we will never be rid of it until people confront their unconscious bias and dismantle power structures that keep Black people from thriving.

Elected leaders being ignorant or indifferent to the history of racism in our country will only ensure that it continues to poison our nation.

Muche Ukegbu, lead pastor of a multicultural Miami church called The Brook, put it this way.

“I’m becoming more and more convinced that tone deafness doesn’t come from not having the right people in the room, but from having the wrong things in their hearts,” he said. 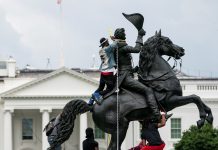 This heritage isn’t worth preserving