The video, posted on Twitter Tuesday morning by an account called “The Unexplained,” lasts just 14 seconds, but it raises so many questions.

It shows a man in a hat, T-shirt and cargo pants picking up a full-grown alligator off  a sidewalk in front of a strip shopping center, then carrying it inside the Florida Key Lime Pie Store in Cocoa Beach.

The alligator is wearing a T-shirt, too, and clearly does not mind being carried around like a very large puppy. “Only in Florida,” is the only comment posted by the Twitter user. The video has now gone viral on Twitter, TikTok, Facebook and other social media platforms.

What’s not explained by The Unexplained is that the alligator is a 6-footer named Sweetie, and she is blind.

“She’s really well behaved and just as laid-back as she can be,” said J.R. Greene, the man in the hat who appeared in the video.

Greene works at Jungle Adventures wildlife park in Christmas, which has been Sweetie’s permanent home ever since a state wildlife commission employee brought her in about six years ago.

“They didn’t want to euthanize her, but she couldn’t be released back into the wild,” explained Louie Moreland, owner of the Florida Key Lime Pie.

Moreland and Greene are native Floridians and friends since childhood.

Moreland said the video, first shot and posted Monday by a TikTok user named Rachel Bowman who asked “Why does this sum up Florida so well?”, did not show something unusual.

Instead, he said, it captured a regular occurrence. Greene brings Sweetie to his store just about every weekend, he said, where she hangs out while visitors to pet her as if she were some sort of scaly collie.

The T-shirt she’s wearing in the video advertises the Florida Key Lime Pie Co., which in addition to pies sells such Florida-centric wares as Key lime ice cream and gator jerky.

In addition to being a viral video star, Sweetie may be the most widely traveled alligator in Florida history. Greene has taken Sweetie along to visit schools all over Brevard and Polk counties, as well as to various resorts and hotels in the area, trying to educate people about the once-endangered species.

“People up North think that alligators down here are always eating people up and that they should all be killed,” Greene said. He tries to teach them that the gators were here first and that they play an important role in the ecology of Florida, he said.

Sweetie has come to play an important role at Moreland’s store. Sometimes Sweetie hangs out by the front door along with Moreland’s grandson Grayson. He jokes that they’re his customer service representatives.

Sweetie is still growing, Greene said, and in a few years should reach her full size of about 10 feet. Once that happens, he won’t be carrying her around any more.

“She’s going to have to walk,” he said, laughing. 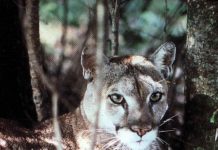 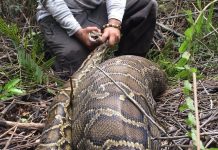 Hey, Olympic Committee! Why don’t y’all come on down to Florida? July is lovely here!

Ginnie Springs and Seven Springs Water Company: Profit ahead of the...