“Governor DeSantis and Commissioner Corcoran, I know you’re watching live right now, as well. Please send our children back to school. We want them back,” said Hanna, whose school district covers Leon County.

Hanna’s request was made during a virtual discussion on a Facebook live stream, framing what has become a debate on whether kids should go back to brick-and-mortar public schools in August — or not.

Neither DeSantis nor Corcoran have announced what the state plans to do, with the new school year only about two months away.

Just recently, a committee working on reopening schools included remarks from member Carol Cleaver, an educator who said, “We need to be able to consider alternative calendars. It might not be possible for students to begin in August.”

That K-12 committee organized by the Florida Education Association and the United Faculty of Florida, both unions, recently published recommendations on reopening schools.

Leon Supt. Hanna had been a member of the committee but recently withdrew, the Tallahassee Democrat reported. Hanna said “he would feel uncomfortable supporting its recommendations without further study.”

Hanna did not elaborate on recommendations he disagreed with. In Thursday’s virtual discussion, however, he briefly expressed his opposition to staggered scheduling, which is one of recommendations provided by the FEA committee for reopening Florida’s public schools.

“Then, there are discussions about ‘half the kids in one day, half out.’ ‘You go Monday then I go Tuesday’—I am not a proponent of that at all,” Hanna said. “What I am a proponent of is giving families and parents choices.”

During the virtual Facebook discussion, Hanna said he supports an idea to provide a digital platform to allow Leon County parents the option of having their kids return to brick-and-mortar classrooms or continue practicing distance learning from home.

He outlined how he would like the 2020-21 school year to look—brick-and-mortar schools open with the option of a “digital learning academy” for parents who do not feel comfortable sending their kids to classrooms in the fall.

“We should be able to offer kids distance learning at each of our sites, so that kids can remain Montford Mustangs or Deerlake Bucks or Leon Lions. And still get to associate with their school,” Blessing said.

Hanna also announced a district-wide survey for parents to provide their comfort-level of returning to school in the fall and their interest in utilizing the digital learning academy. This survey will close next Friday.

From there, Hanna’s plan is to gather the information from these surveys, allow the ‘Reopen Leon Schools Task Force’ to convene for a month, and provide a “formal notice of intent” to the parents of Leon County students in the first week of July.

Leon County parents will then be expected to choose their preference of instruction for the first semester—in either brick and mortar classrooms or online learning.

During the virtual discussion, many parents were commenting on the Facebook feed, asking for clarification on how exceptional student education — additional help provided for students with unique learning needs — will be improved for the fall. The speakers on the conference did not address those questions. 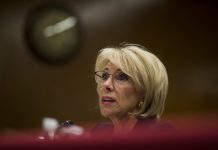 School superintendent in the state capital calls on governor, education commissioner: ‘Please send our children back to school’

FL educator: “I don’t want to die going back to the...

FL lawmakers try to take on the youth nicotine crisis, but...