Wildfires burned nearly 2,600 acres in the Panhandle this week, and firefighters braced for another tough day of red-flag conditions Friday despite some anticipated help from lower winds and higher humidity.

The “very high” warnings are for:

Florida Fire Service Director Erin Albury said there are smaller fires burning around the state that pose a concern with weather like this because “none of them are fully contained.”

The Florida Forest Service reported that roughly three dozen structures in Santa Rosa and Walton counties have been destroyed this week, including at least 17 homes, and that approximately 500 residents were ordered to evacuate. Thousands more were advised to be ready to evacuate as conditions dictate.

No injuries were reported among residents nor first responders, who are being assisted by special teams from outside the region and were supplied with masks to protect them from exposure to COVID-19.

Fried said there is severe risk that fire will break out in the north Florida counties where millions of pine trees felled by Hurricane Michael, a Category 5 storm in October 2018, remain on the ground, dried out and ready to burn hot.

“That would be devastating,” Fried said, noting that most of the felled timber – estimated at 500 million trees, worth $1.3 billion – has not been cleared out because disaster funds to assist with that massive effort have still not arrived.

The large fires that flared this week are in Mussett Bayou, in Walton County, covering nearly 600 acres, and Five Mile Swamp, in Santa Rosa County, where flames across 2,000 acres have forced the closure of a nine-mile stretch of I-10.

Fried said residents should remain on guard and be ready to evacuate on short notice.

“The threat is far from over, and there’s no rain forecasted, and conditions will continue to increase for fire behavior,” Fried said of the press conference. “Residents should be ready for the possibility of a wildfire impacting their neighborhood.”

Fried and Albury said the origin of the fires was traced to a prescribed burn set by a contractor on private land. That fire, fueled by a sudden increase in wind speed and a drop in humidity, escaped, Albury said.

Special teams of personnel with tractor-plow units, brush trucks and helicopters are rallying from around the state to work to contain the fires and prevent others, Albury and Fried said.

Albury added that the dry, windy weather that hit the Panhandle early this week is spreading into central and south Florida, which also are unusually dry. He said a colleague in south Florida observed “15 percent humidity in tropical south Florida … it’s unheard of.”

Fried said the first responders including local and regional firefighters, law enforcement officers, foresters and volunteers have been invaluable in preserving life and property.

“Hearing of the heroism of people going into homes to save people’s lives is remarkable,” Fried said.

She added that state troopers are assisting motorists around the closed portion of I-10 while enforcing checkpoints to enforce quarantine on visitors driving in from coronavirus hotspots out of state, including New Orleans. 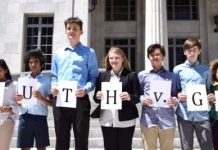 Prepaid tuition program issuing refunds to thousands of families, worth $511...