Sam Badger is a grad student in a teaching role at the University of South Florida. Like many graduate assistants, he finds it challenging to live off a low stipend.

“Even though being a student and GA together is effectively full time, many graduate students still need to find outside work to make ends meet,” he said.

Graduate assistants at the University of South Florida in Tampa are entering the summer school session with several uncertainties, from pay, health and dental insurance to parental leave and other benefits, according to USF Graduate Assistants United.

The situation is especially worrisome during the COVID-19 pandemic that has shuttered brick-and-mortar schools across Florida, said Badger, vice president of the GAU chapter at USF.

“It’s challenging moving courses online if you’re a GA because you’ve prepared an in-person course,” he said.  “We have health insurance through our work, but the university no longer subsidizes all the health care costs thanks to the insurance company increasing rates. We lack dental or vision.”

USF had a total of 2,198 graduate assistants enrolled in the spring 2020 semester, according to the university.

The GAs are provided a stipend and serve in either a teaching, research or administrative capacity at a university.

The average annual wage for graduate teaching assistants in Florida is $29,110, according to a 2018 report from the U.S. Bureau of Labor Statistics. That report also lists Florida among top states with the highest employment level in that occupation, 13,130.

California has the highest employment of graduate teaching assistants with 22,270, while the mean annual wage is $36,350, according to the 2018 report.

“GAs are expected to work only as a GA and not seek outside employment during the school year while they are on contract,” Badger added.

What’s even more concerning is that the union has been trying to reach an agreement with the university on better pay and a variety of other benefits, but the entire contract process has been sluggish.

Samantha Shepard, who is a PhD student and graduate assistant at USF, said the union had been trying to bargain new contracts with the university for three months. But just last week the university agreed on a May 7 meeting.

“But they’ve employed various stalling tactics,” Shepard said in an email to the Florida Phoenix, alleging the USF administration hadn’t previously responded to proposed dates for a follow-up meeting.

“It’s also comically hypocritical that USF administration ordered all of us to transition to online instruction by March 23 so USF could keep educating, but now they’re claiming they can’t bargain with us remotely?” Shepard said.

“Ours began in February, and they have inconsistently answered attempted email correspondences since then and have offered very little availability over the past few months for a second date,” she said.

Brianna Cusanno, the chapter’s co-chair of communications, said that she thinks USF’s delaying tactic is because they are “anticipating budget cuts and facing much uncertainty due to the COVID-19 pandemic.”

‘GAs are some of the lowest paid and most vulnerable’

“It is easier for them to just avoid making any promises to us until they have some answers about the plan for next year,” Cusanno said in an email to the Phoenix. “While we sympathize with this position, GAs are some of the lowest paid and most vulnerable members of the USF community.”

Supporting USF graduate students’ basic needs – earning a livable wage to survive – should be a top priority for the university and would only enhance its goal of academic excellence, Cusanno said.

Shepard, the PhD student, said graduate assistants are hoping for a living wage, vision and dental insurance, and paid parental leave, adding that “healthcare enrollment exceeded the cap that USF was willing to pay, thereby, causing graduate assistants to have to pay an extra $159 annually in health care costs.”

The Phoenix reached out to the university, and USF spokesman Adam Freeman said in an email last week that the administration is planning a “bargaining session with GAU” on Thursday.

“The University of South Florida is committed to bargaining in good faith with Graduate Assistants United and all unions representing USF employees,” Freeman said. “We have been diligent in addressing concerns raised by GAU.” 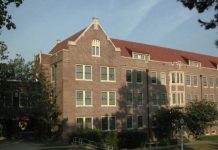 Is it possible? College sophomores and juniors might be squeezed out of campus dorms and traditional instruction

Trying to flip from Red to Blue: Andrew Gillum endorses 21...