The 30-second spot uses rapid-fire audio snippets of Trump dismissing the seriousness of the nascent but fast-growing COVID-19 outbreak from late January through late March while an on-screen graph ticks increasingly upward as U.S. cases exponentially multiply. In one snippet, Trump appears to dismiss the virus as “a hoax.”

Evidently that hit too close to home for Trump’s campaign. It sued the tiny northern Wisconsin station for defamation on April 13, claiming that the ad distorted Trump’s actual “hoax” comments from a February campaign rally in South Carolina.

At the rally, Trump was stoking the crowd’s anger at congressional Democrats who had impeached him over a scandal that he called a hoax. Then he said that the Democrats’ claims that he was downplaying the deadly contagion was “their new hoax.” The Washington Post, hardly a bashful Trump critic, vetted the claim that Trump had literally called the virus a hoax and gave it the paper’s strongest rebuff – four Pinoccios.

Without question, the ad takes some degree of liberty with Trump’s word-for-word transcript, but how much is in the eye of the beholder – or a jury, should it get that far.

To assess its egregiousness, it would have to be weighed against mean and reckless presidential campaign rhetoric that dates from branding Andrew Jackson’s wife an adulteress to the discredited claim that Barack Obama is an African-born Muslim.

Trump’s antipathy for national media, except for a few unabashed allies at Fox News, speaks for itself. A master marketer, he has had some success undermining the credibility of traditional press and making his “fake news” label stick, particularly among his loyal base.

He has used rallies, briefings and press gaggles to demonize the White House press corps, taunting and baiting those he considers antagonists. Conversely, the press does itself no favors when correspondents take the bait and respond in kind, make overreaching claims based on thin reporting or rely too heavily on anonymous sources, none of which inspires broad public confidence.

Trump is no stranger to litigation. His record as a businessman is rich with lawsuits that he has filed and suits filed against him, including a recent defamation action that he hasn’t been able to shake.

Presidents – not even Richard Nixon during the Watergate reporting that eventually forced his resignation – had not resorted to defamation actions to settle scores with the press. After all, the presidency affords them the world’s brightest spotlight and loudest megaphone to rebut the claims of those who buy ink by the barrel. Public debate at its zenith, as the First Amendment envisions it.

“Presidents historically have not used defamation as a tool against the media, but it’s also true that there is no rule prohibiting powerful public figures from bringing a suit,” said Rod Smolla, dean of the Widener University Delaware School of Law and a leading First Amendment authority.

Trump broke with history. In the two months before his campaign sued WJFW, it filed libel complaints against The New York Times, CNN and The Washington Post, all over news or opinion content.

A unanimous court held in 1964 that public officials had to prove not just that damaging published statements are false but that the publisher knew they were false or acted in reckless disregard to their falsity, a standard the court called “actual malice.”

At every step of litigation brought by public officials, courts with the actual malice standard in mind afford a media defendant the benefit of the doubt, Smolla said. So while that makes prevailing at trial improbable for Trump, it’s not out of the question should a court determine that the ad so deliberately and maliciously twisted his words that it inverted their original meaning, he added.

Unlike the three suits Trump had filed against the three media titans, the defamation suit against WJFW is over paid advertising, not editorial content. Strangely, the suit does not name Priorities USA, which produced and paid to air the ad, as a defendant. And curiously, Smolla noted, the suit is brought by Trump’s campaign, not the president himself.

“One strategic reason that the president may not want to be the plaintiff is if you sue as the president, you put your own reputation before the court. Every exaggeration, every statement he’s made notwithstanding clear evidence that it’s wrong – that could be embarrassing,” he said.

Trump need not win a big judgment at trial to achieve a significant strategic edge – inhibiting press criticism during his re-election campaign through the specter of litigation and the ruinous costs of a legal defense.

“I see this as much more political than legal,” said Mark J. Rozell, dean of the Schar School of Policy and Government at George Mason University. “Financially struggling media organizations that face high-level lawsuits and the expense and publicity associated with them may decide that the easier thing to do is be extra cautious and not put themselves in a position of being sued by the president of the United States.”

“This was fired as a warning shot to broadcasters and WJFW is going to stand up for the rights of all broadcasters, especially in a presidential campaign, and continue to provide information to the public about all candidates,” Tobin said.

The super PAC that produced the ad and is responsible for its content is not a defendant. A tiny television station in the sparsely populated northlands of a swing state that was integral to Trump’s 2016 electoral college majority will fight this battle alone.

While many such suits are deemed not to meet the actual malice standard and are dismissed pretrial, attorneys’ fees can easily climb into six figures. Even though broadcasters carry insurance policies for just such a possibility, just paying the deductible and the higher premiums are daunting for cash-strapped media fighting to survive COVID-19 business declines.

“This was clearly meant to have a chilling effect on the broadcast community. They want broadcasters to be afraid to take political advertising,” Tobin said of the lawsuit.

Until a few years ago, litigation against small-town media would have been deemed a waste of a sitting president’s time and beneath the dignity of the office.

Turns out the new rules of politics are the oldest of them all: the law of the jungle. 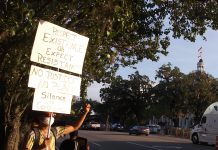