The COVID-19 crisis will blow a financial hole in Florida’s state budget.

That’s because Florida, without a personal income tax, relies heavily on sales tax collections to fund its government. Sales taxes were projected to provide about $27 billion out of the state’s $34 billion general revenue fund this year.

But the coronavirus outbreak has slammed the doors of Florida stores, dine-in restaurants, bars, theme parks and other establishments, which generate sales taxes during normal times.

Hundreds of thousands of Floridians have lost their jobs, meaning they have less to spend on big-ticket items that also yield sales taxes, such as a car purchase.

Yet out of the crisis, some see a chance to make a fix in Florida’s sales tax system. It won’t provide immediate relief. But over time, it would broaden the state’s sales tax base, while providing more fairness to Florida-based businesses.

“There are some opportunities in even of the greatest of challenges,” Dominic Calabro, president of Florida TaxWatch, said in an interview with the Florida Phoenix.

Calabro and his business-oriented research group say now is the time to close a loophole in the sales tax system that allows some online companies to avoid paying the sales tax on purchases in Florida.

With the state and local sales taxes averaging just over 7 cents for every $1 in taxable purchases, it effectively gives those online companies that avoid the tax a 7 percent price advantage over their Florida-based competitors who must pay the sales tax.

And closing the online loophole is not a radical idea. Forty-three of the 45 states that have a sales tax have adopted the policy, leaving Florida and Missouri as the outliers, according to the National Conference of State Legislatures.

“This is good tax policy,” Calabro said. “It’s good for the taxpayers. It’s good for the economy. It’s the right thing to do for the rule of law and you help Florida recover from this insidious, economic pandemic called the coronavirus.”

But despite the arguments for the proposal, it still faces resistance in the Florida Legislature.

The measure has yet to win any favor in the conservative-dominated House, where key leaders still consider the measure to equate to a tax increase on consumers.

This debate has been going on for decades.

It first began with catalogue sales. Florida and other states worked to apply the sales tax to those purchases from out-of-state companies. But they were limited by court rulings that said the states could not force the companies to collect the tax unless they had a “physical” presence in the state.

The out-of-state sales expanded exponentially with the growth of the Internet and online purchases.

But everything changed in June 2018 when the U.S. Supreme Court upheld a South Dakota law that effectively let states collect sales taxes not only from companies with a physical presence in their states but also a “virtual” presence.

In the wake of that decision, 43 states have moved to collect the sales taxes on so-called “remote” sales, although Florida has yet to join them.

The case of Amazon

Another way to look at the issue is through the lens of Amazon, the mammoth company that plays a large role in online sales.

Until 2014, Amazon did not collect sales taxes on its online sales in Florida. But that changed, when the company built distribution warehouses in Florida and began to collect the sales tax.

But not all Amazon sales resulted in sales tax collections for Florida. That’s because other entities, so-called third-party sellers, use the Amazon platform to sell their products and they are not required to collect the sales tax.

Analysts with the Legislature’s Office of Economic and Demographic Research looked at the issue in a December report and estimated there were $3.7 billion in “escaped” third-party sales on the Amazon platform in 2019.

Yet, the online retailers are doing nothing wrong. It’s up to the consumer who makes the purchase from the out-of-state, or even a foreign, retailer to file a form with the state Department of Revenue and pay the so-called “use” tax.

“However, use tax compliance is notoriously low,” according to legislative analysts.

Calabro said closing the remote sales tax loophole will shift the burden to the out-of-state retailers to pay the tax, while eliminating any liability on everyday Floridians who make the online purchases.

State lawmakers have been debating legislation that would close the remote-seller sales tax loophole for the past several years.

In the 2020 session, a Senate bill (SB 126) unanimously cleared two committees but stalled before a floor vote when it became clear a House bill (HB 159) would not be heard in the session.

“Our Florida retailers are the ones who suffer the most, the ones who are providing jobs and paying a variety of other taxes and contributing to our state overall, for the benefit of out-of-state and sometimes foreign entities,” state Sen. Joe Gruters, a Sarasota Republican, said in presenting his bill to the Senate Finance and Tax Committee in February.

“This is long overdue. Florida is behind the curve,” he said.

Calabro and other advocates seeking to close the sales tax loophole say the broadened tax base it offers could help the state when it begins to recover from the coronavirus economic shutdown.

In an estimate made before the state’s economy collapsed, legislative analysts projected that once the sales tax was applied to all remote sellers it could generate nearly $600 million a year, with $479 million flowing to the state and $100 million to cities and counties that have local sales taxes.

Once fully implemented in a normal economy, Calabro said extending the sales tax to remote sellers could generate more than a $1 billion a year in a relatively short time.

He said it is one of the proposals lawmakers should look at when they return to Tallahassee in the coming months to make likely adjustments in the $93 billion state budget due to the loss of revenue during the pandemic.

Making the sales tax base more robust would eliminate any debate over other options to revive state revenues, Calabro said.

“This will help Florida secure its prosperity in the longstanding future and also allow taxpayers the confidence that they can still rely on a conservative transaction-based tax system as opposed to a more aggressive and liberal personal income tax or property taxes, which currently is limited or prohibited by the state Constitution,” Calabro said.

A tax increase or not?

Despite the arguments and support in favor of closing the remote sellers loophole, Calabro said there remains some “ideological resistance” to the proposal.

The House bill, sponsored by Rep. Chuck Clemons, an Alachua County Republican, never received a hearing in the conservative-dominated chamber.

But Calabro and Gruters say closing the loophole does not create a tax, since the tax is already owed by consumers who buy from a remote seller. Instead, they say the change would simply shift the tax-paying responsibility to the remote seller or the online platform that they are using.

“This is not a tax increase,” said Gruters, who is also chairman of the Florida Republican Party. “This tax is currently owed. We’re just changing the time when the tax is collected and remitted.”

Though the loophole has met resistance in the Florida Legislature, a variety of organizations and governmental bodies support closing the sales tax loophole for remote sellers.

“Florida’s current sales tax structure is not only inconsistent with the 2018 U.S. Supreme Court ruling and the rest of the nation, but it also places a heavy personal responsibility on Floridians who shop online and gives an undeniable advantage to foreign retailers,” Scott Shalley, the president and CEO of the Florida Retail Federation, said in a statement to the Florida Phoenix.

“Reforming the law can level the playing field and streamline revenue collection of sales tax that is already owed to — but often neglected by — the state,” he said.

Among the organizations that supported the legislation in the 2020 session were business-oriented groups such as the Florida Chamber of Commerce and Associated Industries of Florida. Major businesses, such as Walmart and Target, also testified in favor of changing the law.

The Florida Association of Counties and the Florida League of Cities, whose member rely on local sales tax collections to fund programs also support closing the loophole.

The Florida AARP and some environmental groups also testified in favor of the proposal.

Lindsay Cross, representing the Florida Conservation Voters, told the Senate Commerce and Tourism Committee last fall that broadening the state’s sales tax base will help provide funding for a host of “unmet needs” in Florida.

“With the lack of an income tax, it’s imperative that we keep this money within our state,” Cross said. “We have many unmet in terms of conservation initiatives and protecting our precious water quality.” 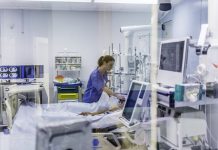 As FL sales tax collections crash in a virus economy, it may be time to close sales tax loopholes to pump up cash

The push for recreational cannabis in Florida remains on target for...