Confirmed cases of COVID-19 in Florida’s state-run prisons and probation offices rose to 41 on Tuesday, up from 12 in just one week.

There were 37 confirmed infections among employees at 17 corrections facilities and three regional probation offices.

The Florida Department of Corrections runs 144 corrections facilities, with 96,000 inmates and 24,000 employees.

Meanwhile, Florida’s nine federal-run prisons got a scare Tuesday when the U. S. Bureau of Prisons reported that three employees were confirmed as infected at the Federal Correctional Institution in Tallahassee.

It would have marked the first infections in the federal prison system in Florida, which incarcerates 10,000 people.

Instead, a federal corrections employee representative told the Florida Phoenix the report was an error, after conferring with the wardens of FCI Tallahassee and FCI Talladega, in Alabama. The new cases occurred in Talladega, he said. Hours later, the Bureau of Prisons changed its report to reflect that.

Nationwide, COVID-19 infections in the federal prison system rose to 314, up from 52 in one week.

Tuesday’s report cited 241 confirmed infections among inmates and 73 among staff in 40 facilities, mostly in the eastern half of the nation.

Eight inmates, in Ohio and Louisiana, died from the new coronavirus after they were transferred to local hospitals, where they tested positive, were placed on ventilators and did not recover. 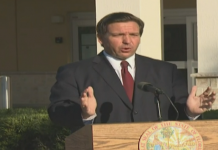