It looks like Gov. Ron DeSantis only wants to talk to reporters he can hand pick out of a crowd and send a car for.

He apparently doesn’t want to hear from serious-minded veterans who might ask him a serious question or two. Perhaps he has no answers.

The Capitol Press Corps in the state capital is filled with tough reporters who aren’t afraid to ask tough questions.

The problem is trying to get into the door to ask the governor a question.

On Saturday, as DeSantis got ready to have a press conference so Floridians could get the latest news on the spread of the deadly coronavirus, he refused to let a respected, seasoned reporter into the Capitol.

Initially his office tried to limit who could attend by giving 10 minutes notice to some reporters.

Mary Ellen Klas, a reporter in the joint Miami Herald/Tampa Bay Times bureau with 32 years experience covering the Capitol, guessed when it would occur and attempted to attend.

The governor’s staff at the Capitol refused to let her in.

But they sent a car to pick up television reporter Mike Vasilinda so he could get in through the Capitol’s underground garage and invited others to attend. (We’re not implying that veteran Vasilinda can’t ask tough questions.)

But it seems like DeSantis and his communications officials like to carefully select the reporters who might ask questions and go out of their way to get them inside a press conference.

This doesn’t appear to be a public meetings violation in Florida, but it flies in the face of a free press.

The Miami and Tampa Bay newspapers have a combined readership that exceeds that of any other news organization in Florida, so I’m guessing the governor didn’t really want Florida to know what he is doing to help us deal with the virus.

The refusal came after the editors of newspapers in Miami, Palm Beach, Orlando and St. Petersburg asked the governor to move his press conferences from an overcrowded room at the State Emergency Management Center to a larger room to ensure distance between those attending, a recommendation made by medical authorities around the world.

Helen Aguirre Ferré, communications director for the governor, said they don’t have the same group of reporters at every press conference and are trying out new options to provide greater distance between reporters, which can mean fewer reporters.

In a Saturday tweet, Ferré said that the reporter did not return two calls.

Ferré also told the Phoenix that the governor’s office  “moved on to fill the space’’ with another reporter, despite the fact that Klas was waiting nearby.

It’s an old trick loved by despots who really don’t want us to know what they are doing. (It’s not clear if the reporter filling the space was a veteran who could ask tough questions.)

The basic problem here is that DeSantis is looking like a clone – an exact copy of President Donald J. Trump, a man who truly does not want any reporter to know what he is doing behind the scenes and spends much of his time denouncing those who write the truth.

And that is bad for Florida.

DeSantis broadcast his press conference behind locked doors over live streaming public television – but held it on such short notice, you’d have to be sitting on your email every second to find it.

Not the best way to communicate with most people.  And he only took questions from some of the chosen few who were invited to attend.

If he was trying to cut down on the distance between those who attended, there are plenty of rooms in the Capitol that could have held a crowd. But he ignored them all and broadcast out of his own office.

When DeSantis, a total stranger to Tallahassee politics, won the governor’s race and took office last year, it seemed as though he might be a reasonable guy who at least understood the state’s environmental problems.

He was identified as Trump’s hand picked candidate, but it initially seemed as though he was smarter and might actually make a decent governor.

On Sunday, the move to exclude Klas was denounced on CNN’s Reliable Sources by Chief Media Correspondent Brian Stelter and author Stephen King, who happens to live in Florida.

King was especially critical of DeSantis, noting the he has set a “horrible example from the top on down’’ by failing to order Floridians to shelter in place.

“In Florida, it’s stay home if you want to,’’ King added.  “There’s a sense that the people at the top are saying don’t worry about this too much.’’

DeSantis and his staff need to study Florida’s long valued traditions of open government and sunshine. We actually have laws that require the public’s business to be done in public.

Can there be any business more important than a virus that is killing thousands of people all over the world?

Is there anything more important than communicating what we know about that virus and any chance of defeating it than letting Floridians know what is happening and how we can deal with it? 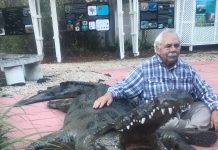 Searching for a Panacea amid a pandemic: ‘We’ve been in continuous operation for 56 years – until the coronavirus’

An unbelievable odyssey: Trying to access court records, for free and...

Chasing the Saudi government’s connection to a Sarasota gated community and...