The Trump administration has encouraged Americans to head to national parks as the COVID-19 pandemic continues to spread, but Florida and several other states have closed their state parks temporarily or indefinitely to protect both visitors and staff.

Outdoors enthusiasts longing to head outdoors can still find places to hike, bike and paddle but the rules are different now. National, state and municipal parks in various states are handling things in a variety of ways.

Full and partial park closures are posted to keep people from gathering for parties, picnics and play dates – to protect them and park staff from coronavirus – but many parks with extensive trails, greenways and wide open spaces amenable to safe use are still open.

Managers of those park lands say visitors are not allowed to congregate, and staff will shoo them away if they do.

The National Park Service has closed world-famous wildnernesses such as Yosemite, Rocky Mountain National Park and the Florida Everglades, but many others remain open or partially open, and entrance fees are waived.

Park-user posts on the National Park Service Facebook page show that many people are trying to get outside and enjoy springtime in the parks.

But with the Centers for Disease Control and Prevention and others calling for social distancing, the Park Service says park managers are deciding park by park the extent to which they can keep staff safe and keep park visitors – the locals and the long-distance travelers – in compliance.

Some parks are getting too crowded, users report, while others are as wild as ever.

A sign of the times: Roads around the Tidal Basin and National Mall in the nation’s capital were blocked Sunday by order of the mayor of Washington, D.C., to cut down on the number of people flocking to see the famous spring bloom of the cherry blossoms. Pedestrians had been gathering in large numbers for “peak bloom” despite health warnings for them to distance from each other.

Another sign of the times: Public boat launches around peninsular Florida are closing – they were left open after park entrances had already closed – because too many boaters were caught tethering into groups to have on-the-water parties that defy social distancing recommendations, park managers reported.

Back-country camping is still allowed in some parks, including the Everglades, said Leandra Gonzalez at the Gulf Coast entrance to the Everglades. All access on the Miami-Dade site is shut down.

Some private eco-tour operators say they’re getting plenty of jobs, but they’re only taking small groups of people already related to each other, and it’s getting harder to find places to launch kayaks and set up campsites.

“The boat ramps are closing because people were gathering on the water, but we can still paddle,” said Harry Smith of Harry Smith Outdoors in Tallahassee.

“You have to check with the locals, and use common sense. A lot of local trails and greenways are open, as long as you don’t gather in groups. If nothing else, get out and go for a drive with the windows down.”

For state governors in Florida, Washington, New Mexico, Oregon, Illinois, and Pennsylvania – several with high infection rates – the solution to the parks conundrum was to temporarily or indefinitely close them all, a view shared at the national level by the National Parks Conservation Association and the Coalition to Protect America’s National Parks.

“We should not be encouraging more visitation to our national parks. It is irresponsible to urge people to visit national park sites when gathering at other public spaces is no longer considered safe,” said Phil Francis, chairman of the Coalition to Protect America’s National Parks, which represents over 1,700 current, former and retired park employees.

Theresa Pierno, president and CEO for the National Parks Conservation Association, said parks that remain open should make the safety of visitors and staff the top priority.

“The Park Service should be waiving fees, but not to make parks more accessible. Waiving fees prevents park staff and visitors from having close interactions during this ongoing pandemic,” Pierno said.

“We remain concerned about the health and safety of park staff and visitors and strongly urge everyone to follow the guidance of public health experts before planning a trip to any park, in order to protect themselves and their communities.”

Pierno and Francis were reacting to Interior Secretary David Bernhardt’s announcement last week that the government would suspend collection of entrance fees at its 419 parks and heritage sites.

“I’ve directed the National Park Service to waive entrance fees at parks that remain open,” Bernhardt said in a statement. “This small step makes it a little easier for the American public to enjoy the outdoors in our incredible national parks.”

Rep. Raúl Grijalva (D-Ariz.), chairman of the U.S. House Natural Resources Committee, said the administration needs to establish clearer safety protocols for employees and visitors to prevent the spread of the virus in parks.

“For someone in Secretary Bernhardt’s position, it is cavalier at best and profoundly dangerous at worst to encourage public lands visits without encouraging all visitors to avoid crowding of high-traffic areas and popular parks,” Grijalva said in a statement. “He should revise his recommendations to better reflect the advice of public health experts.”

Many national parks offer vast expanses of nature that seem ideal for social distancing. But park managers concerned about contagion have shuttered visitors centers, campgrounds, playgrounds and picnic areas where visitors tend to congregate, linkely bringing the virus with them from their points of origin. Meanwhile, keeping bathrooms open means staff must maintain them, while closing them means visitors may relieve themselves in the wild.

“Quite frankly, the idea that we can go to these wild areas and have safe social distance is false; humans travel through corridors,” O’Neill said.

In an updated announcement posted on its website Sunday, the Park Service said it is taking “extraordinary steps to implement the latest guidance from state and local authorities” to slow the spread of the virus and support CDC recommendations to promote social distancing.

Bernhardt also issued a memorandum to Interior Department employees directing those who do not perform “mission critical” functions to telework.

The national park system includes a wide array of parks and monuments, large and small, some near densely populated areas and some remote. Bernhardt told park superintendents that they could respond to concerns about the virus as they see fit — modifying operations, closing facilities or canceling programs.

More than 150 parks have announced closures of buildings and programs while keeping trails open.

Residents who live near Arizona’s Grand Canyon National Park started an online petition to close the park, with over 1,400 signatures as of Tuesday morning. Grand Canyon is open, although lodges, shuttle buses and visitor centers are closed.

The petition argues that the influx of visitors to the park is too big a strain on local resources, given the potential public health threat. The nearest hospital is an hour and a half away.

Joan Anzelmo, who worked in the Park Service for 35 years, said that keeping the parks open could put a strain on a workforce that may be needed to address other emergencies, like wildfires.

“I am very worried that we may be exhausting the federal workforce that is the bench that serves public lands in all sorts of emergencies,” Anzelmo said.

Anzelmo was superintendent of the Colorado National Monument before she retired from federal service in 2011. She also worked at the National Interagency Fire Center and in agency headquarters during her career.

“Right now our government is saying to stay home, do social distancing, and you cannot have that as the top message and then the Interior Department says, ‘You can go to the parks, and by the way, they are free,’” Anzelmo said. “That is a conflicting message and it makes no sense.” 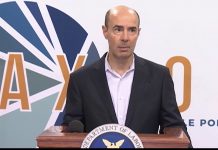 In isolation: Time to reflect on a cleaner, more energy efficient...