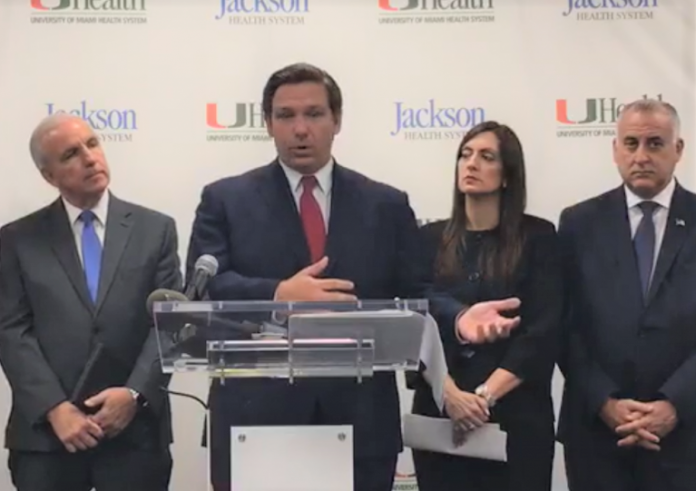 Using his power as chief executive of the state, Gov. Ron DeSantis ordered tens of thousands of state employees to suspend travel for at least 30 days and told agencies to allow employees to work from home.

“If they can perform functions at home, now’s a good time to do that,” DeSantis said.

The governor also announced cancellation of visitation at state prisons, although video visits are allowed, and has sharply restricted access to nursing homes and other facilities housing the elderly and others with serious medical conditions.

During a news conference in Miami, DeSantis said he’s appealed to Major League Baseball and the PGA to at least bar fans from tournaments and games.

“They can still compete [sic] the event and put it on television. People are going to be isolated, our social distancing from home, that would be helpful,” DeSantis said.

“But if a mass gathering is not cancelled — and I don’t have the authority as governor to order all mass gatherings cancelled. But if it’s not, you need to have organized screening measures in place. For example, before entering an attendee should be asked if they are sick or if they have been in contact, not only from some of these foreign countries that have seen outbreaks but places here in the state of Florida, such as the cruise ship terminals” associated with COVID-19 cases, he said.

The elderly and people with serious medical conditions are most at risk of death from the new coronavirus that has been linked to the respiratory disease, according to public health experts, although younger and otherwise healthy people tend to exhibit relatively mild symptoms if any.

Miami-Dade County Mayor Carlos Giménez, appearing with the governor, noted that his jurisdiction has now registered its first case of coronavirus exposure and said he has taken the governor’s advice and banned large gatherings including the Miami Open tennis tournament and events at American Airlines Arena. Some events will proceed without fans.

Giménez has closed senior centers within the county (planning to deliver services and meals to clients in their homes) and said his office is working with Jackson Memorial Hospital to establish isolation areas at Miami International Airport and the port of Miami “to screen, question, and test travelers and employees.”

The two officials spoke as U.S. Sen. Rick Scott announced that he was self-isolating after learning he might have been exposed to the coronavirus during a meeting Monday in Miami with Brazilian President Jaír Bolsonaro. Scott said he wasn’t experiencing symptoms but was acting “out of an abundance of caution.”

Regarding state workers, the government employs some 90,000 people in Tallahassee and across Florida. DeSantis said he’s suspended official travel for 30 days, subject to an extension. “I’m also authorizing state agencies to maximize remote working and telecommuting,” he said. “If they can perform functions at home, now’s a good time to do that.”

The governor emphasized that state health officials are enforcing anti-infection protocols among medical providers. “We want to keep our health care workers safe and we want them to be in the game.”

The Florida Department of Emergency Management has signed contracts to bring in nurses from out of state in case of shortages, DeSantis said, and to purchase additional supplies of personal protective equipment.

State government will take possession of 2,500 commercial testing kits for COVID-9 this weekend, allowing evaluation of as many as 625,000 people for exposure to the new coronavirus, but may lack enough swabs to collect samples for testing.

“There’s a nationwide shortage of that right now. Many of the labs throughout the state do have some supply of these, but our capacity to reach the total amount that our testing kits will allow is really dependent on how much of the materials are available or can be brought into the state where you can actually extract the sample,” DeSantis said.

“In the meantime, though, these testing kits will help many hospitals and labs that do have the swabs on hand,” he said.

“It’s important that we remain vigilant here in the state of Florida. Taking proactive measures will help us flatten the curve of this. As people get exposed, there’s a lag in terms of when they present symptoms,” DeSantis said.

“We’re obviously conscious about the individuals who may be impacted by this directly. We also understand that if more and more people get infected with this without changes in behavior or other types of changes in policy, that’s going to put an enormous amount of stress on our health care system. And a lot of the other ailments are not going away.”

In another COVID-19-related development, the DeSantis administration opened an online survey through which business owners can report any losses. The idea, the governor’s office said, is to measure the need for state aid.