The federal Centers for Disease Control and Prevention has sent coronavirus diagnostic test kits to select states – but officials would not confirm that Florida is on the list, though the Miami Herald has reported that the state did receive some testing kits.

“I don’t have a detailed breakdown…the Florida Department of Health should have that information,” said CDC press officer Scott Pauley.

However, the state health department has yet to respond to the Florida Phoenix, raising new questions about transparency as the pandemic continues around the world.

At the University of Florida in Gainesville, students are receiving ongoing alerts and guidance on what actions to take if they’ve traveled to China recently, according to UF’s website.

The college campus is instructing students to contact the UF Health Shands Infection Control, and students subjected to a quarantine will not be penalized for missing class.

Florida’s Surgeon General, Scott Rivkees, is the state’s chief health official and his agency has not been providing information about potential Florida cases. Rivkees also works at UF on weekends, he has said.

The Phoenix also contacted local health departments in the state to see if they’ve received any kits to test for the deadly virus. But local officials sent the Phoenix to the Florida Department of Health.

Thursday, federal health officials tallied 15 cases of the disease in seven states in the United States, none of them in Florida.

Another patient who had visited China tested positive for the virus in California. And the latest case involved a patient in Texas under a federal quarantine with others who recently returned to the United States from China, the CDC said. The other states with cases are Arizona, Illinois, Massachusetts, Wisconsin, Washington state.

The Miami Herald wrote that: “Florida health officials received testing kits for novel coronavirus earlier this week but can’t use them yet because it’s unclear whether the tests are working.”

Some labs have reported issues with the tests not performing correctly, the CDC said during a press call on Wednesday.

These faulty tests were giving inconclusive results but not being used on potential patients, the CDC said.

“Some public health labs at states were getting inconclusive results and what that means is that test results were not coming back as false positive or false negatives, but they were being read as inconclusive,” said Dr. Nancy Messonnier, director of CDC’s National Center for Immunization and Respiratory Diseases.

“Now, these were not tests being run on actual clinical specimens from potential patients.”

The testing kits, which were developed by the CDC to detect the China-born disease, can test 700-800 patient specimens but are not Food and Drug Administration (FDA) approved, according to the CDC. They were sent to more than more than 30 countries, Messonnier noted.

“Obviously a state wouldn’t want to be doing this test and using it to make clinical decisions if it isn’t working as well as perfectly at the state as it is at CDC, so this is part of a normal process and procedure and redoing the manufacturing is the next step,” Messonnier said. “We are working closely with them to correct the issues and as we’ve said all along.”

Meanwhile, U.S. Sen. Rick Scott, a Florida Republican and former governor of Florida, has criticized China authorities on social media for not being trustworthy.

“Communist China has proven that it cannot be trusted, which is why I asked the @WHO to do their own in-depth analysis on the extent of the spread of #Coronavirus,” he said in a Twitter post on Tuesday.

The World Health Organization (WHO) had recently given the virus an official name, COVID-19.  It was previously known as 2019 Novel Coronavirus or 2019-nCoV.

Health officials have said that they are expecting to see more U.S. cases of the coronavirus that has killed more than a thousand people in China.

Ex-HHS chief Shalala slams Trump’s COVID-19 response: ‘They stomp all over the science’ 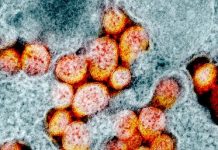 Florida COVID-19 deaths have exceeded 200 for the first time; Infections have risen to 12,350

Failed legislation would have helped inmates get out as virus spreads behind bars. Now, deaths have begun

Ex-HHS chief Shalala slams Trump’s COVID-19 response: ‘They stomp all over the science’

AP students will take exams at home with electronic devices — with open book...

FL Surgeon General defends past “reports about sexual harassment and some...