WASHINGTON — About a year ago, a New Jersey teen was forced to cut his dreadlocks in order to participate in a high school wrestling match.

The wrestler, Andrew Johnson, received a hurried haircut after he was told by a referee that his hair violated wrestling rules. He won the match and state officials opened a civil rights investigation, The New York Times reported.

Now members of Congress are trying to make sure that never happens again.

Florida Democratic Reps. Al Lawson, Frederica Wilson, Alcee Hastings, and Val Demings are among the U.S. House lawmakers pushing a bill that would ban discrimination based on hair textures and styles.

The bill, known as the CROWN Act, would clarify that discrimination based on race or national origin encompasses hair texture and style.

Backers say the bill — which names styles commonly associated with black people, such as dreadlocks, cornrows, twists, and Bantu knots — would improve equity in education, employment, housing, and other public programs.

The issue is of particular concern to black women, whose hair is more likely than white women’s hair to be perceived as “unprofessional,” according to a 2019 study of 2,000 black and white women. It was supported by Dove, a beauty company that came under fire in 2017 for an ad that featured a black woman who took off her shirt and transformed into a white woman.

The study finds that black women are also more likely than white women to be sent home from their workplace because of their hair and more likely to report harsh judgments based on looks. Four out of five said they have to change their hair from its natural state to fit in at the office.

But women aren’t the only victims of hair-based discrimination.

Another high-profile incident involves Chastity Jones, a black woman who applied for a job in 2010 as a customer service representative with Catastrophe Management Solutions (CMS), an insurance claims company in Alabama. She got the job, but the company rescinded the offer because she wouldn’t comply with a request to cut her dreadlocks.

The Equal Employment Opportunity Commission filed a lawsuit against CMS, but a district court ruled for the company, arguing that its grooming policy did not constitute intentional discrimination because hair styles, unlike skin color, are not an “immutable” characteristic.

The Atlanta-based 11th U.S. Circuit Court of Appeals upheld the decision in 2016.

Wendy Greene, a law professor at Drexel University, disputed the court’s reasoning, calling the doctrine of immutability a “legal fiction” that is “rooted in a discredited view of race as biological and unchangeable.” People classify individuals racially through various characteristics, including hairstyles and texture, she said in an interview, noting that such characteristics were used as a basis to enslave people.

Black women in particular have a “narrow way” in which they can show up at work, she said. Conforming to biases favoring straight hair can be exhausting, timely and expensive, not to mention a threat to physical and mental health. “Our federal civil rights laws absolutely can and should protect against systematic discrimination,” she said.

Jones sought to appeal her case to the U.S. Supreme Court, but the court did not grant a motion that would have allowed the case to continue.

In the last decade, the U.S. military changed its policies regarding women’s hairstyles in response to objections of racial bias from members of the Congressional Black Caucus.

Policies have improved, but some restrictions remain, according to Samara Sheff, a spokeswoman for Wisconsin Democratic Rep. Gwen Moore, a member of the caucus.

Lawmakers in about a dozen other states, including Florida, have introduced state-level legislation.

Even so, action at the state and local levels is not enough, said Lawrence of Michigan, one of the bill’s congressional co-sponsors. A federal law is needed to clarify, strengthen and unify anti-discrimination laws across the country.

Lawrence said the CROWN Act has the support it needs in the Democratic-controlled House, and said the Congressional Black Caucus — of which she is a member — is pushing for a committee hearing on the issue this year.

‘What year is this?’

But prospects on the other side of the Capitol are dim.

The GOP-controlled Senate is consumed with impeachment for the moment, and the presidential election year will make bipartisan agreement more difficult to achieve. Meanwhile, Senate Majority Leader Mitch McConnell (R-Ky.) has been sitting on hundreds of bills passed by the Democratic-led House.

“You first sort of ask the question: ‘What year is this that employers discriminate against people because of their hair?” Brown said in a recent interview.

But the GOP-controlled Senate is consumed with impeachment for the moment, and the presidential election year will make bipartisan agreement more difficult to achieve. Meanwhile, Senate Majority Leader Mitch McConnell (R-Ky.) has been sitting on hundreds of bills passed by the Democratic-led House.

“I don’t have a lot of hope for anything in the Senate right now,” Lawrence said. “We have been doing our job and passing bills and regulations, but they’re all sitting over in McConnell’s graveyard.”

Brown said that Senate leadership “pretty much wants to spend all its time confirming ultraconservative young judges.” The strategy for advancing the legislation, he said, is to “build a foundation in 2020 to be ready for 2021.”

Even if the bill doesn’t pass soon, the broader campaign to end hair-based discrimination could usher in larger social change, according to Steven Gatley, a California attorney who specializes in employment law.

State, local and federal initiatives are raising awareness about the problem and could encourage employers across the country to review grooming policies on their own, he said. In doing so, they may find that their hair-related policies are out of date, he said. 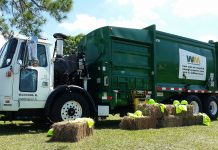 Florida lawmakers in D.C. aim to stamp out hair-based discrimination