Unkind people have even likened the yearly arrival of lawmakers to dogs returning to a marked tree.

Or a swarm of locusts, consuming all before it–in this case steak, oysters, and top shelf booze.

That’s probably why certain grumpy legislators threaten to move the state capital from Tallahassee to Orlando.  Despite Tallahassee’s excellent bus station and hourly mule cart service to Quincy, it’s thought to be “remote” from the rest of the state.

Also, Tallahassee is jam-packed full of Democrats and eggheads and believers in evolution.

Rumor is, the Speaker of the House would like to rent Disney’s Enchanted Tiki Room, with its monkey noises, chanting Polynesian gods and singing orchids.

As everyone knows, the Tiki Room is virtually indistinguishable from the current capitol’s 4th floor, with lobbyists chattering like macaques, reporters shrieking like macaws, and a sinister creature many have mistaken for a deadly Gaboon viper, but is actually Marion Hammer.

Still, it would be a great pity to take the government away from Tallahassee: if the legislature left, our bars, dry cleaners and escort services would go out of business.

But we won’t worry about that now. Instead, let’s celebrate Session’s wonderful customs, like the party Associated Industries of Florida throws on the terrace of its Adams Street mansion the last night lawmakers can legally take campaign contributions.

The shrimp, the cheese cubes, and the checks are piled high under the twinkling lights as AIF reps clutch elected officials by the elbow and the shoulder, then move on to the next one, leaving oily little trails across the lush green grass.

Crowds of angry people in matching t-shirts are another venerable tradition. This year, thousands of teachers rallied in front of the capitol, demanding that the state actually pay them a living wage.

Ingrates. Don’t they care about Our Children?

And what about the beautiful flowers that fill the House chamber on opening day? There are enough blooms to supply three Palm Beach weddings and a Pensacola funeral.

Amid the massed blossoms, Gov. Ron DeSantis informed us that the state of the state is a state of serious awesomeness, with pretty much everything going swimmingly, thanks to him and the stable geniuses of the Republican Party.

Some highlights of his speech:

Taxes are low! Taxes will stay low–especially if you’re rich.

Teachers will get more money! Well, some teachers. The new ones. A few of the old ones, too. Maybe.

The legislature, however, hasn’t exactly jumped up and embraced the idea. Many of them are still smarting from that biology teacher in 9th grade who laughed when they said Jesus rode a dinosaur or that 11th grade English teacher who rolled her eyes when they asked why they had to read books with big words.

Pythons will die! DeSantis introduced a couple of bankers from South Florida sitting in the Visitors’ Gallery. They’ve signed up for the Python Bowl, 10 days of wholesale invasive snake slaughter.

Abortions must stop! At least, teenagers who want to have an abortion need to ask mom and dad, even if it was dad or maybe mom’s boyfriend who got them pregnant in the first place.

You know it’s how Jesus would handle things.

Oh, and also: DeSantis and the wife are about to have baby number three. A girl. Awwwww, another burden on the taxpayer.

DeSantis didn’t forget to boast about his relationship with the Almighty, though. He suggested Hurricane Dorian made a sharp turn and missed Florida because he went to Israel and prayed at the Western Wall, saying: “I’d be remiss if I didn’t thank the Big Man upstairs for any consideration He may have had for us during that close call.”

If only someone in the Bahamas had thought to make the pilgrimage to Jerusalem, maybe Dorian wouldn’t have killed 70 people, left 75,000 homeless and caused $3.5 billion in damage. 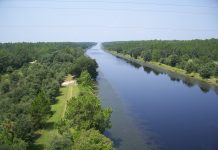 A 77-year-old South Florida environmentalist speaks out and gets sued, harrassed....