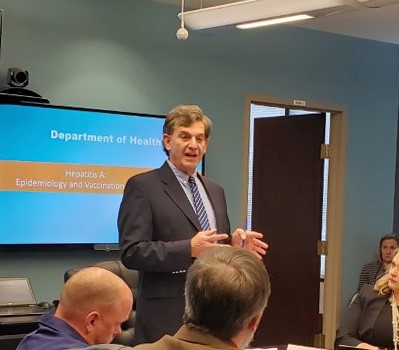 With state senators weighing his confirmation, Florida Surgeon General Scott Rivkees strongly defended his background Wednesday, saying “what has been reported truly is mischaracterization of the facts.”

Rivkees, who also heads the Florida Department of Health, was appointed nine months ago by Gov. Ron DeSantis. But after mounting scrutiny last year, he had not been confirmed by the end of the 2019 legislative session.

This week, Florida senators began the confirmation process, starting with a favorable vote from senators on the Health and Human Services Appropriations subcommittee.

But some senators on the panel Wednesday had deep concerns and questioned Rivkees’ background.

But she also questioned Rivkees, saying, “There have been a lot of reports about sexual harassment and some impropriety related to some comments that you have made in the past.”

The Florida Phoenix previously reported on allegations related to inappropriate comments, based on a News Service of Florida report.

In an investigation into sexual harassment claims at UF, the university found that “Rivkees made sexually suggestive comments shortly after arriving at the school,” according to a News Service of Florida story.

Rivkees allegedly told people, “If we can’t agree on this we’ll all have to get naked in a hot-tub and work it out,” according to the UF report. Rivkee “indicated that he meant the comment as a joke and may have said it more than once,” according to the report.

Rivkees responded to Book and the other senators Wednesday, saying he is a pediatrician and a pediatric endocrinologist and has made an impact in the fields of health in several areas.

He said he was brought to the University of Florida in 2012, where he “ran into a department that needed some revamping,” Rivkees said. “This ruffled the feather of some faculty members who then launched a series of personal attacks against me and against the university.”

“So I can assure you that I have worked with hundreds of, if not, thousands of individuals over the course of my career, and I have treated everybody with respect and dignity. And in this position, I plan to bring my experience as a physician, as a physician scientist, with expertise in public health and administration, to do great things for our state.”

“I wish to really emphasize that what has been reported truly is a mischaracterization of the facts. And that again, if you look at what we’ve done at the Department of Health, look what I’ve done at my former institution, we’ve done a lot of very good things and have made progress in so many different areas.”

Book asked: “Is there sexual harassment training currently at DOH?” She was referencing the Department of Health.

“I will have to check about what those specific protocols are. But certainly at all the institutions I had been at before I had participated in that,” Rivkees said.

Book ultimately voted no on the confirmation, saying, “These issues give me great concern.” Also voting no was Democratic Sen. Kevin Rader, who represents parts of Broward and Palm Beach counties.

Six other senators approved the confirmation, which then moves on to the Senate Health Policy and Ethics and Elections committees in the confirmation process, as well as a full Senate vote.

Aside from some of the difficult questions, Rivkees’ demeanor was generally enthusiastic and the committee room wasn’t crowded.

Rivkees, who is a renowned medical researcher specializing in pediatric endocrinology, did have supporters who spoke up at the meeting.

The Surgeon General plays an important role, leading the state health departments and tackling a variety of public health issues such as Hepatitis, HIV/AIDS, opioid abuse, and others.

Tazia Stagg, a Tampa physician, has been a concerned about Rivkees’ qualifications for the role and has written letters to state officials about the issue.

“The State Surgeon General must be a physician licensed under chapter 458 or chapter 459 who has advanced training or extensive experience in public health administration,” said Stagg.

“What I see by comparing your background and application to this statement is that your occupancy of the position would be unlawful,” she said in the letter.

Stagg said: “Nothing in his employment application, profile on the UF website, governor’s office press releases, or State Surgeon General webpage reflects that Dr. Rivkees has ever studied public health or held any position in public health administration.”

Delta variant seeps into FL; health experts warn it could be more transmissible than other strains

FL Surgeon General defends past “reports about sexual harassment and some impropriety,” as senators weigh his confirmation

Lawmakers wrap up state budget, failing to use $3.5 billion in...