WASHINGTON — A Florida Democratic congresswoman on Thursday told Education Secretary Betsy DeVos, “You are the most unpopular person in our government.”

Rep. Frederica Wilson (D-Fla.) was among the many Democrats who berated DeVos at a U.S. House Education Committee hearing on the Trump administration’s controversial rewrite of a student loan forgiveness policy.

DeVos appeared on Capitol Hill after a subpoena threat and months of wrangling with House Democrats over her policy. The Trump administration overhauled an Obama-era policy for forgiving loans if students were defrauded by their schools. DeVos said that policy was too lenient.

After taking office, DeVos signed off on claims approved but not finalized by the Obama administration. She wrote when she signed off on those claims that she did so “with extreme displeasure.” Meanwhile, hundreds of thousands of borrowers are reportedly waiting for the government to process their claims.

“Why would you write that? Why would providing relief to defrauded borrowers whose claims have been reviewed by experienced professionals displease you?”

DeVos repeatedly cited concerns about the process, stating that she wanted to make sure taxpayer dollars were being properly used. “Very simply, there was no process. The claims were simply forgiven without consideration for the individual circumstances,” she said.

Wilson told DeVos, “I want to tell you a story about a borrower from Florida named Jessica Madison that gives me extreme displeasure.”

Madison was featured in a July 2017 report in The Washington Post. She had received a notice from the Education Department earlier that year approving the forgiveness of her $19,000 of debt for a paralegal program at Everest College in Clearwater, Fla., a for-profit school that operated by now-defunct Corinthian Colleges, the Post reported.

But while the notice said the debt would be discharged within 60 to 120 days, it wasn’t. The government began garnishing her paychecks.

“As a result, she did not have electricity for weeks because her garnished checks couldn’t cover the bills,” Wilson said. The garnishments stopped after the Post published the story, Wilson added, but only $2,000 of the $12,000 garnished was refunded. Do you believe it is appropriate to not fully refund wages that were garnished for student loans that were deemed fraudulent?”

DeVos’s reply: “Congresswoman, when a student’s borrower defense claim is deemed to be — they have been financially harmed and we have a process to consider that, the level of that, the students are made whole. We address each student’s issue and situation individually. That’s why it’s important to have a process.”

Asked whether students get all the money back that was taken from them, DeVos answered, “It depends on the various claims.”

Wilson said that “because of these wage garnishments, Ms. Madison could not afford to see a doctor to address the intense pain she was experiencing. When she finally did go to the hospital, she was diagnosed with cancer.” Madison died in October, Wilson said.

“Secretary, can you commit to me today that you will personally ensure that Jessica’s wife will receive the remaining $10,000 owed to her by the government?” Wilson asked.

DeVos said she “can and will look into that specific situation. All of these students’ claims have to be considered individually.”

Wilson said she’s had “honest disagreements” with Republicans about how to move education forward, she said, “but I’ve never, not one time believed that they were out to destroy public education until I met you.”

She asked the education secretary, “Why has every decision you’ve made harmed students instead of empowering them? You’re the secretary of education, you’re supposed to be their champion. … You are the most unpopular person in our government. Millions will register to vote in 2020, many will vote to remove you more than to remove the president.”

“One of those last comments was over the line, absolutely over the line,” said North Carolina Rep. Virginia Foxx, the top Republican on the committee. “To say that Secretary DeVos is trying to destroy public education is going too far.”

She added, “that kind of comment cannot stand in this committee.” 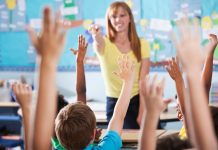 Regardless of age, FL teachers and staff can get vaccines under a Biden administration plan

Policing and voting: Republicans in FL Legislature and Democrats in Congress push in opposite...

FL Democrat in Congress to Ed Secretary Betsy DeVos: ‘You are the most unpopular person in our government’