“It’s a national treasure that is vanishing before our eyes,” said Allison Delashmit, who represents the Sarasota-based Mote Marine Lab. She was part of a televised panel Monday in Key Largo, in the Florida Keys, to announce the launch of “Mission: Iconic Reefs.”

Swaths of the Great Florida Reef, mostly in the Florida Keys National Marine Sanctuary, are dead or dying, chiefly from a suspected bacteria causing stony coral tissue to die and dissolve on reefs throughout the Caribbean. The disease, first spotted in 2015, swept through the Florida Reef in only five years, killing more than 40 percent of the stony corals.

Corals, which are living organisms, also are widely under stress from degraded water quality linked to residential and agricultural runoff, bleaching caused by hotter water temperature, damage from boating and excessive fishing, and storms.

The ambitious rescue program will be headed by the National Oceanic and Atmospheric Administration. The first phase, involving research, cultivation and transplantation, is estimated to cost $97 million, a sum the panelists said is small compared to the value of tourism related to the coral reefs.

Participants in the program already are involved in emergency rescue projects and have pledged to find the funds for long-term restoration. 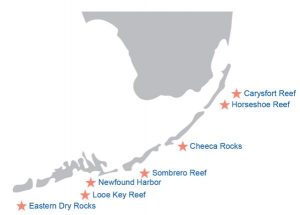 Program managers identified seven coral reefs that they consider iconic as the primary targets of the rescue and recovery mission. Those are Carysfort Reef (the northernmost of the sites), Horseshoe Reef, Cheeca Rocks, Sombrero Reef, Newfound Harbor, Looe Key Reef, and Eastern Dry Rocks (at the southern end of the Keys).

Diving organizations, dive shops and volunteers also are helping, by monitoring and tagging coral reefs in support of the scientific efforts. Several took part in the event Monday announcing the reef-rescue program.

Divers with the Coral Restoration Foundation, a non-profit based in Key Largo, will help by cultivating and transplanting endangered staghorn and elkhorn corals onto the reefs, something it has been doing since it was founded in 2007.

Dive groups also have aggressively promoted diving practices to protect corals, such as banning use of oxybenzone sunscreens that cause coral bleaching and thoroughly cleaning boats and dive gear between outings to prevent the spread of coral-killing bacteria.

NOAA reports that Florida’s iconic reefs contain only 2 percent coral cover, compared with an historic norm of up to 40 percent.

In phase 1, the reef-rescue mission aims to increase coral cover to 15 percent by growing corals in labs and ocean nurseries and transplanting them; also by promoting algae-grazing species such as sea urchins that help rid reefs of nuisance algae.

Meanwhile, marine labs are capturing samples of all healthy corals in hopes of maintaining a genetic bank for future reef restoration.

Panelist Sarah Fangman, superintendent of the Florida Keys National Marine Sanctuary, said the emergency rescue efforts must also be supported by long-term, systemic improvements in water quality, which has been degraded in south Florida by residential, industrial and agricultural runoff. Nearshore waterways are polluted with blue-green algae, red tide and other signs of sick water.

“We feel we cannot wait to solve those problems before we start,” Fangman said at Monday’s announcement event in answer to a question from the audience. “But you are spot-on. We must continue to tackle those issues. As we demonstrate that progress can be done, that is leverage. … You’ve got to turn off your pollution that’s coming into this system.”

FL House delivers a big win for GOP in voting to restrict COVID-related lawsuits; opponents won’t give up fighting the bill

New more infectious COVID-19 strain now detected in almost every state in the nation; FL has the most cases