The unpaid balance on Florida’s credit card dropped by $400 million in the last year.

The state doesn’t really have a credit card. But the government borrows money to build roads, construct schools and buy environmental land. And a new report to Gov. Ron DeSantis and the Cabinet shows Florida now owes $20.6 billion as of June 30, down from $21 billion of debt in the prior year.

“We have the wind at our back,” Ben Watkins, director of the state Division of Bond Finance, told DeSantis and Cabinet members last week. “We have a strong economy with growing revenues. We have a reduction in the amount of debt that we have outstanding because of our limited use of debt to finance our budget. And we have been able to reduce our cost of the debt we have outstanding by lowering the interest rate through refinancings.”

The new report shows a nine-year trend in debt reduction that began in July 2010 when Florida’s state debt reached a peak of $28.2 billion. It has since declined by 27 percent to $20.6 billion.

A major factor in the debt decline was former Gov. Rick Scott, who strongly opposed state borrowing during his two terms as the state’s chief executive.

The other major factor was historically low interest rates that have allowed the state to refinance its existing debt with new bonds carrying much-lower interest rates.

Changes in federal tax laws have somewhat curtailed the state’s ability to refinance older debt. But Watkins said strong investor demand for government bonds as well as the low interest rates have allowed the state to continue to cut debt costs.

“It has kept us in the game on our ability to be able to reduce our long-term costs for refinancings,” Watkins said.

“We have been able to take advantage of the historically very favorable interest rates and market conditions to save the state money and reduce our long-term fixed costs associated with it,” Watkins said.

In his $91.4 billion budget proposal for the coming year, DeSantis is recommending limited borrowing, restricting it to transportation projects and a 600-bed mental-health hospital for the state prison system.

Florida has also been able to lower its debt by maintaining top-notch credit ratings, which makes it cheaper to borrow money. For the first time in its history last year, Florida obtained “triple A” ratings from the three major credit agencies – Moody’s, Standard and Poor’s and Fitch Ratings.

But Watkins also warned that there are several issues the state will have to continue to address in order to maintain “our stellar credit ratings.”

The first is the state needs to maintain a high enough level of reserve funds in its budget, which gives the state more financial flexibility in the case of an economic downturn or emergencies, like hurricanes, Watkins said.

The state finished its last fiscal year on June 30, with $3.4 billion in reserve funds. It represents 10.4 percent of the state’s general revenue, the main funding source for the budget that includes revenue such as sale tax and corporate tax collections.

Watkins said the credit-rating agencies like to see at least 10 percent in the reserve funds.

In his budget plan for 2020-21, DeSantis is recommending $3.1 billion in reserve funds, including $1.4 billion in unallocated general revenue funds and $1.7 billion in a budget-stabilization fund. An additional $2.5 billion would also be available, when counting unspent money in various state trust funds and about $800 million in a tobacco-settlement fund.

Another major challenge for keeping the state’s high-level credit ratings is the financial health of the Florida pension system, which pays benefits to retired teachers, state workers, county employees and other public workers.

“The status of pension funding is an important aspect of credit rating analysis,” the debt report said. “In recent years, there have been more downgrades of state credit ratings (nationally) due to outsized pension liabilities than any other single credit factor.”

Watkins said the state took an important step this fall in improving the long-term financial health of the pension fund.

A group of state analysts, known as the Florida Retirement System Actuarial Assumption Conference, recommended the Legislature reduce the “assumed rate of return” on the $160 billion-plus pension fund to 7.2 percent a year, down from 7.4 percent.

The proposal, if adopted by lawmakers, would move the projected rate of return closer to what independent financial analysts have said is a more realistic expected return in the range of 6.6 percent per year.

“We are moving the right direction. But we will have more work to do in that space,” Watkins said.

But, as the Florida Phoenix previously reported,  it will also cost the government agencies that participate in the fund an estimated $380 million in the next budget year, representing the increased pension fund payments they will have to make. 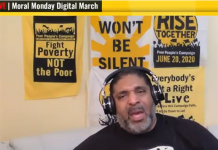 More than 1 million FL workers file for unemployment, as pandemic...