U.S. Rep. Kathy Castor of Tampa traveled to Madrid with a Congressional delegation Monday to tell international climate-change conferees that Americans stand with their global neighbors despite what the U.S. president says.

“This delegation is here from the United States to say we are committed to climate action now,” said Castor, a Democrat who chairs the House Select Committee on the Climate Crisis. She spoke along with 13 other congressional committee chairs and House Speaker Nancy Pelosi on opening day of the United Nations COP25 conference on climate change.

Pelosi announced to the international audience that House Democrats will present a climate action plan in March 2020 to resume the interrupted work of cutting U.S. emissions of greenhouse gases that trap heat in the planet’s atmosphere, causing destructive climate change.

President Donald Trump halted that work, which was begun by President Barack Obama and former Secretary of State John Kerry in accord with the 2015 Paris Agreement on climate change. Trump has withdrawn the U.S. from that agreement and rolled back environmental protections.

The conference of delegates from 200 nations opened Monday in Spain’s capital city amid dire warnings that the planet is quickly running out of time to prevent severe damage from global warming. The delegates aim to hammer out their concrete commitments to reduce greenhouse gases right away before the warming is too great to be reversed.

No senior officials with the Trump administration are participating, but the United States is represented.

“The United States is still in,” Pelosi said “We are here to send a message that Congress’ commitment to take action on the climate crisis is ironclad.”

Pelosi and others said cities, states, businesses and citizens across America want to do their part on behalf of the planet’s climate, despite the president’s refusal to acknowledge worldwide science proving climate change is real and is dangerous.

The World Meteorological Association, an international science group under the auspices of the UN, reported ahead of the conference that failure thus far to curtail greenhouse gases makes severe reductions vital.

Scientists say hope of limiting global warming to 1.5 degrees C – a crucial threshold – is fading fast. The climate already has warmed 1.1 degrees from pre-industrial temperatures, mostly due to carbon emissions created by burning fossil fuels. An increase of 3 degrees or more will be catastrophic, scientists say.

Florida scientists agree that the early impact of climate change on Florida is evident in sea-level rise, increased temperatures and severe weather.

“We must do this with a sense of urgency,” Castor said. “All of the science points us in the direction that we don’t have time to waste.

“We intend to follow the science. And we intend to ensure that vulnerable communities across America and across the globe have every opportunity to participate in this clean-energy economy and transformation,” Castor said.

Striking a note of optimism, Castor said conversion to clean, sustainable energy offers new economic opportunities worldwide and extends hope to future generations. She and others in the U.S. delegation said they feel bolstered in the presence of climate defenders from around the world and are encouraged to hear frank debate about climate change back home as the 2020 presidential election approaches.

“Isn’t it refreshing to have presidential candidates in the United States of America debating the fine points of climate action? It’s inspiring, and we intend to meet the challenge,” Castor said.

Pelosi said world leaders must be focused and resolved because climate change poses “a generational and existential threat to humanity.” 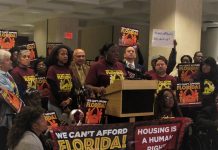 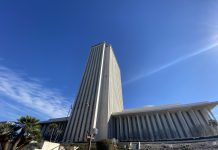 DeSantis attacks mail-in balloting, despite no evidence of problems in FL;...