A disease killing stony coral in the Great Florida Reef now infects half the corals from Martin County to the Lower Keys, marine scientists reported this fall.

The Great Florida Reef is the only living coral barrier reef in the continental United States and one of the world’s largest.

Stony coral tissue loss disease, whose cause is not yet known, has spread to 96,000 acres of the reef tract and the myriad species of stony corals there, according to the Florida Department of Environmental Protection and the National Oceanic and Atmospheric Administration.

Once infected, corals lose living tissue and turn white (not to be confused with coral bleaching caused by higher water temperatures). Colonies usually die in weeks or months, state and federal researchers say. The disease also is killing stony corals throughout the Caribbean. 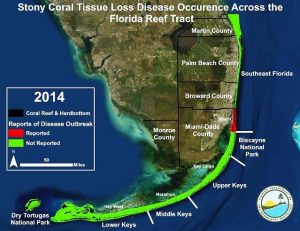 An animation published by Florida DEP shows how stony coral tissue loss has spread exponentially from 2014 to this year, growing from a large patch (in red) offshore from Miami into a sweeping swath stretching from Martin County to areas beyond Key West.

Researchers and volunteers trying to fight the disease are taking tissue samples, monitoring water quality, weather and pollution, and studying how various species of coral respond to the disease.

Pointing to the potential that whole reefs could die off before treatments or cures are discovered, coral-rescue teams are removing specimens from the wild and isolating them in land-based nurseries to keep them disease-free.

If they survive in captivity, these corals could be reintroduced to the wild in hopes of establishing new reefs in the future. 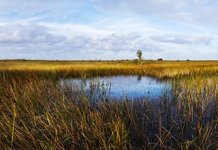 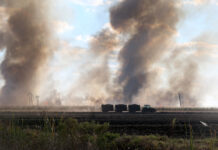 Big Sugar burns fields, bends DeSantis and FL Legislature to do its bidding 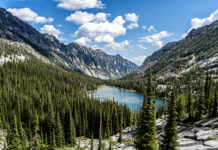 No details yet on Biden conservation plan, but D.C. Republicans slam it as a ‘land grab’

Frail, elderly, and frontline workers in FL are in Phase 1...